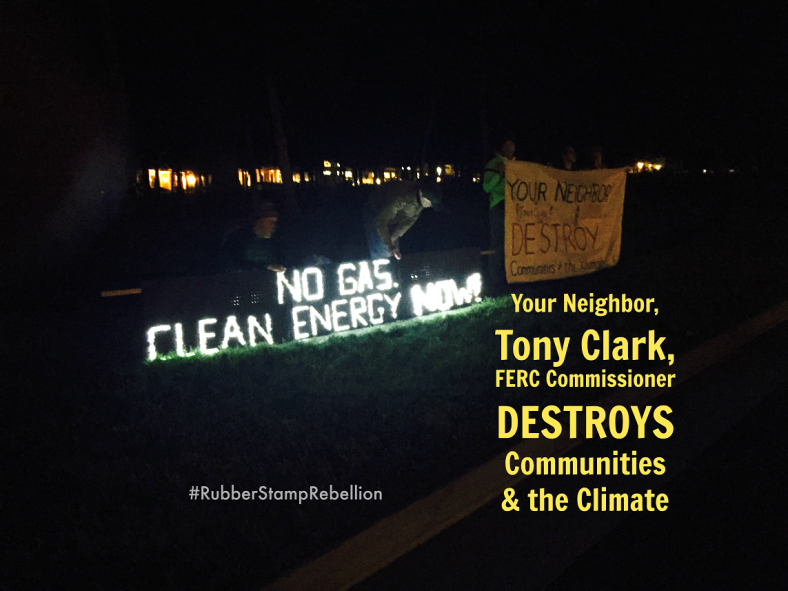 On the first day of the #RubberStampRebellion, seven climate activists were arrested while forming a human blockade at the exit of the underground parking garage at the Federal Energy Regulatory Commission in Washington, DC. That night they camped out at the home of Commissioner Tony Clark. Today, more protests, lobbying and camping out at FERC Chair Norman Bey’s Washington, DC home.

“My grandchildren and all future grandchildren thank you,” Steve Norris, an organizer with Beyond Extreme Energy (BXE), called out as Homeland Security agents handcuffed the seven and led them away. “Thank you for standing up to this corrupt rubberstamp machine that is destroying communities and whose policies are destroying the planet.”

All week, BXE is carrying out creative, non-violent actions throughout the Washington, D.C., area, targeting FERC and the fossil fuel industry whose projects that rogue agency approves.

During the blockade and at an action in the morning, #RubberStampRebellion activists distributed a small pamphlet to passersby that explained the rationale for the rebellion actions planned for this week:

For too long, this invisible federal agency has caused community destruction and climate devastation with every permit it issues.

For too long, FERC has rubber-stamped fracked-gas pipelines, compressor stations and export facilities.

For too long, FERC has guided the fracked-gas industry through the permit process and offered advice on handling community opposition.

For too long, FERC has insisted that it can’t take into consideration climate change caused by fracking and other fracked-gas infrastructure.

For too long, FERC has insulated itself from community dissent, sending aides to local hearings while forbidding comment at its monthly public meetings in Washington, DC. Those who speak out are hauled from the room and barred from ever returning.

BXE is calling for an end to the Fracked-gas Expansion Rubber-stamp Commission, an end to the FERC that promotes fracking and fossil fuel infrastructure that makes wealthy corporations more powerful while sacrificing communities, our health and our Earth. BXE calls for a swift, just transition to a renewable-energy economy.

On the first night of the RubberStampRebellion, six climate activists visited the Ashburn, VA., home of FERC commissioner Tony Clark.

Although the activists didn’t bring toxic and climate-wrecking air and water pollutants that FERC permits, they taped wanted-style posters in a park across from the Clark townhouse that included a photo and notified neighbors:

Tony Clark, Commissioner of the Federal Energy Regulatory Commission, Rubber stamps fracked gas projects for the oil and gas industries; Complicit in the deaths of 100 million people which the World Health Organization says may die by 2030 due to climate change.

They also posted on his front door a notice of eminent domain, similar to the orders used to seize land for pipelines for transporting fracked gas. In March, BXE had a #PancakesNotPipelines action at FERC to protest maple trees razed under an eminent domain seizure for the proposed Constitution pipeline in Pennsylvania and New York, even though all state permits had not been granted. With Josh Fox and Tim DeChristopher acting as pancake chefs, landowner Megan Holleran served up the last drops of syrup from her trees at the event.  A week after the Holleran family’s maple trees we cut down, New York said it would not issue permits needed for the pipeline. Read about that action here.

Among those visiting the Clark residence for the #RubberStampRebellion was Wes Eastridge from Marshall, Va., who said: “We’re fighting against the continued development and reliance on methane–because it’s totally unnecessary. FERC allows companies to destroy people’s property with eminent domain and that methane is obtained by an extremely destructive process known as fracking.”

On Day Two the #RubberStampRebellion will be spending the morning on Capitol Hill seeking support from senators in states with pending projects before FERC; the afternoon visiting offices of some of the companies seeking to build those projects; and, from 6 p.m. into tomorrow morning, ​holding a ​vigil outside the home of FERC chairman Norman Bay in the Dupont Circle neighborhood.  Participants in the rebellion seek to to hold him accountable for expediting fossil fuel projects that wreck communities and the planet. Methane (so-called “natural” gas is 96 percent methane) contributes 86 times more global warming gases to the atmosphere, per molecule, than carbon dioxide in the first 20 years after release. Several prominent climate scientists say that if we don’t drastically reduce methane releases immediately, there’s no way to keep global warming under 2 degrees Celsius. Bay’s visitors will spend the night outside his home and hope to converse with him in the morning. 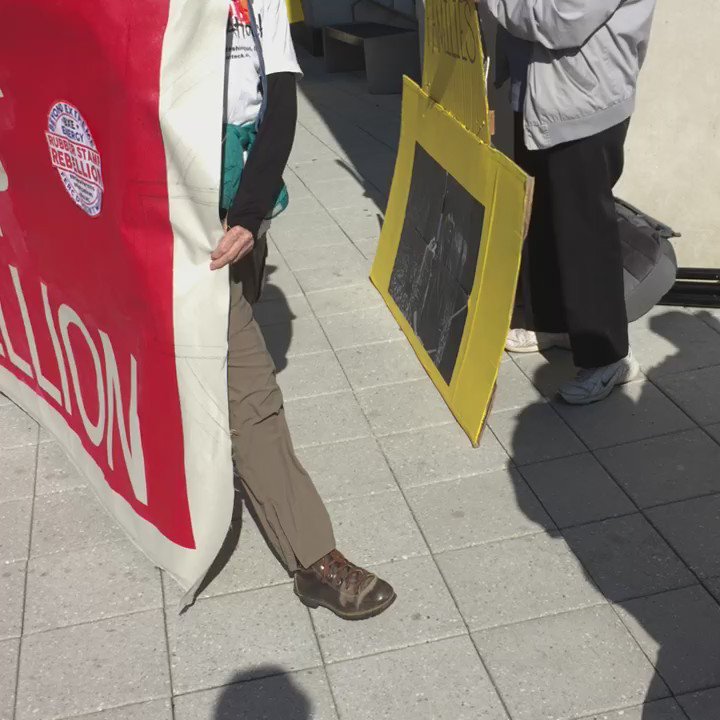