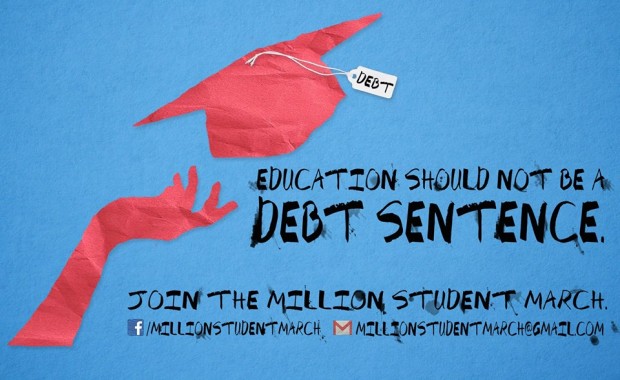 On November 12, thousands of college students in nearly 100 cities are walking out of class to demand tuition-free public college, a cancellation of all student debt, and a $15/hour minimum wage for campus workers across the US. The protest has been dubbed the “Million Student March.”

“Higher education is in a state of crisis,” said Million Student March organizer Keely Mullen in an interview with US Uncut. “We need to build a mass movement against the system of corporate higher education.”

Mullen’s story is like the story of millions of other students across the US. Just to be competitive in today’s job market, she’s had to take on an enormous amount of debt in order to get a college degree. And in less than a year, Mullen will owe $150,000 to lenders as she begins the daunting post-college job hunt. Mullen and other students owe a combined $1.3 trillion in student debt to public and private lenders. This is more than any other form of debt in the US, including credit card debt and car loans. The average student today will owe more than $35,000 in student debtby the time they graduate.

“We’re ready to fight back. We’re waking up with empty hands and empty pockets and realizing that we shouldn’t be shackled to debt before we even enter the adult world,” Mullen said. “It feels more and more like education is just not a priority of our government or our system.”

A multitude of organizational powerhouses are involved in organizing the Million Student March, which, according to the official Facebook event page, is taking place at 87 campuses as of the time of this writing — nearly quadrupling the number of actions planned from just a month ago. Participating organizations include the United States Student Association, the Student Labor Action Project, Socialist Alternative, Unchain Our Schools/People’s Power Assemblies, the Energy Action Coalition, National People’s Action, and others (FULL DISCLOSURE: US Uncut has signed a public statement of support for the march).

One participating organization, College Students for Bernie, with over 150 chapters across the country, has endorsed the action, and they claim Vermont Senator Bernie Sanders — whose presidential platform includes tuition-free public colleges and universities — has reportedly endorsed the Million Student March as well. While Democratic front-runner Hillary Clinton proposed “debt-free” college in the wake of Sanders’ free college proposal, march organizer Elan Axelbank doesn’t buy it.

“This still means families will have to empty their pockets just so their kids can get an education,” Axelbank said. “Wells Fargo is the second-largest private student loan lender in the country, and is also one of the biggest contributors to Hillary Clinton’s Super PAC. How can corporate politicians like her take on the corporations abusing us when they’re the very ones funding her election?

Mullen said students are planning to unite with groups that have already organized successful actions, forging strategic partnerships and making a commitment to join future calls for actions announced by those groups.

“The student movement will have to link arms with labor unions, the national Fight for $15, the Black Lives Matter movement, and all other progressive social movements,” Mullen told US Uncut. “It won’t be quick or easy, but the power of the people united around clear and just demands is capable of achieving anything.”

Mullen and Axelbank are encouraging supporters to visit the Million Student March’s official website, StudentMarch.org, to learn about or plan a march in their area, RSVP to the Facebook event, and invite all of their friends.