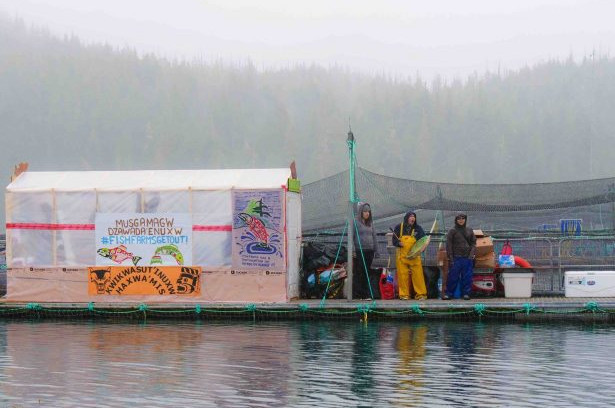 Above Photo: Indigenous people camping in a section of the Midsummer Island fish farm in British Columbia, Canada. (WNV/Musgamagw Dzawada’enuxw Cleansing Our Waters)

The sign outside the protest encampment on Midsummer Island in British Columbia, Canada, is a blunt summation of what its inhabitants — indigenous people from various First Nations tribes — have been trying to accomplish for the past two months: “Get Fish Farms Out.” Yet, due to a Supreme Court ruling issued last week, it is not the fish farms that must leave the island, but rather the demonstrators and their camp, which consists of two small houses with beds, solar panels and a replenishing supply of food.

The court made its decision after receiving an injunction, or demand for removal request, by Marine Harvest, the Norwegian seafood company that operates the facility. Demonstrators were given three days to dismantle the camp and 30 days to leave the island — or risk arrest. As the decision was being handed down, more demonstrators gathered outside the court in Vancouver to tell reporters and supporters that they are still committed to their demand of removing fish farms on indigenous territory.

“That doesn’t mean the occupation is over,” said Ernest Alfred, hereditary chief of a few First Nations tribes in British Columbia. “We just have to strategize and come up with a plan of relocation.”

The plan that unfolded saw a handful of First Nations people remove and transport all their Midsummer Island supplies, including the homes, to another encampment at nearby Swanson Island, which is also the site of another Marine Harvest facility. Fish farm facilities are actually housed in the ocean, where species such as smelts and salmon are raised in open pens surrounded by nets. Operation permits can only be obtained through federal and provincial governments, not First Nations tribes — even if firms are working in their territory.

First Nations people have been frustrated with these facilities for years, seeing them as threats to native livelihoods. According to the Canadian Ministry of Agriculture, the region has experienced a near 80 percent decline in wild salmon since 1990. Fish farm opponents blame sea lice, which are a common problem at the facilities. These parasites feed off skin, blood, or mucus and can spread infectious disease — not only among the farmed fish, but also to wild ones on the other side of the netting.

The science does support fish farm opponents’ worries to an extent. In 2015, University of Toronto researchers found an abundance of sea lice among salmon that was at least partially caused by the fish farms. Other factors, such as warmer ocean temperatures, were important factors as well. A commission set up by the Canadian government in 2009, following the decline of salmon in British Columbia’s Fraser River, more-or-less came to the same conclusion: It could not thoroughly name fish farms as the source of the problem, but suggested the government stop promoting salmon farming.

Regardless of the factors, the declining wild salmon population has many First Nations people worried about losing a way of life. Sherry Moon, a tour guide from the Musgamagw Dzawada’enuxw First Nations territory, grew up learning how to cut, smoke and dry salmon — spending every year fishing for them until the population shrank. The last time she fished was four years ago.

“I can’t even teach my two little ones because we don’t have fish,” she said. “It’s devastating because there’s so much that comes with that salmon. Everything depends on that salmon — the trees, the bears, the orcas, us.”

It was this understanding, coupled with years of government inaction, that led Alfred and his niece to launch a protest that would be hard to ignore. So, in August, they built a floating structure at the Swanson Island farm and started camping out on it. This led to a rapid response across British Columbia. Six indigenous communities started an encampment at Marine Harvest’s Port Elizabeth and Wicklow Point farms. The latter was eventually moved to the Midsummer Island facility when demonstrators got word that the company had restocked fish there. Meanwhile, a group of female indigenous leaders set up what they call a Matriarch Camp outside of government offices in Victoria.

Moon was among those who immediately joined in, arranging boat trips to the islands and organizing rallies as well as fundraisers.

“I put a lot of myself into this,” she said, explaining that demonstrators prefer not to use the word occupation and instead opt for observation. “We call our occupiers ‘observers.’ We’re not protesters, we’re protectors.”

As a result of their efforts, provincial officials have begun to show interest in working with indigenous groups to solve their problems with the fish farms.

“I got a call from a member of parliament in Ottawa,” Alfred said. “That minister told me we have a very strong presence in Ottawa and that we have the eyes and ears of the federal government.”

This comes more than a year after First Nations communities tried to gain the attention of government officials by issuing an eviction notice to Marine Harvest, as it operates in waters that were never delegated to province. The letter detailed the dwindling wild salmon numbers and accused the industry of “infringing on our way of life, by breaking the natural circle of life that has sustained First Nation people for time immemorial.”

Then the occupations forced everyone to pay attention. Yet, despite their recent promises, Azadi is skeptical that government officials will do anything about the fish farms — if for no other reason than that the provincial economy depends on the industry for tax revenues. Her doubts have merit, particularly since the New Democratic Party has yet to actually follow through on its campaign pledges last spring to “make sure that these territories … are clear of fish farms.”

Still, there are signs that the government may make good on its word. Agricultural Minister Lana Popham has already issued Marine Harvest a letter saying that the government is considering asking the firm to relinquish control of its sites in “an effort to develop and maintain healthy relationships with First Nations in whose territories companies are doing business.”

According to Marine Harvest director of public affairs Ian Roberts, the letter “sent a shock and chill to the business community,” which has upwards of 70,000 leases in the province. He described the fish farm occupations as unprecedented and said they have caused the company significant delays.

“We’re disappointed some First Nations in the province have taken it upon themselves to bypass a diplomatic and peaceful opportunity to raise concerns about our business operations,” Roberts said, while also stressing the lack of concrete evidence linking fish farms to the decline in wild salmon populations.

According to Alfred, however, the protest is about more than that. Ultimately, it is about their human rights as indigenous people.

“It’s not that we happen to like salmon,” he said, summarizing the words of another chief. “Our entire culture is based on our ability to be connected with the planet and our ecosystems. Our world view is that we are just a tiny section of a huge web of life.”