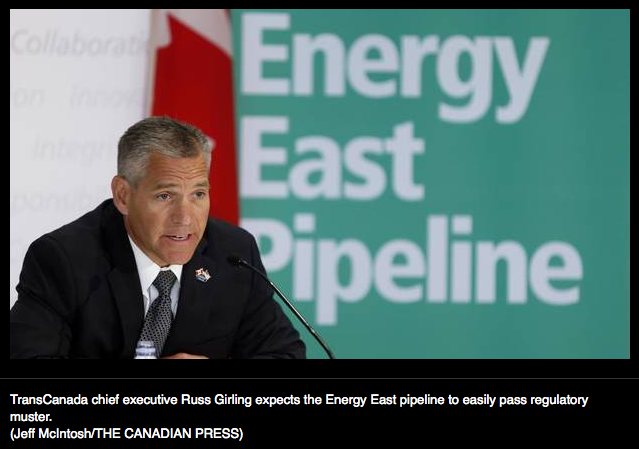 Some 70 First Nations leaders met in Winnipeg recently to plan a strategy they hope will block TransCanada’s ambitious plan to ship more than 1 million barrels a day of crude from Western Canada to refiners and export terminals in the East, despite widespread political support for the $12-billion project.

TransCanada has been holding consultations with communities across the country, including some 155 First Nations, to inform them of the Energy East project and seek their support. The company has hired Phil Fontaine, former chief of the Assembly of First Nations, to represent it in meetings. But one leading activist says the company has a tough sell.

“In this era of the Harper Conservative government, there is dramatic pressure that has been placed on the shoulders of First Nations peoples, with our constitutionally protected rights, to defend Canada’s air, water and earth from the agenda of Big Oil and other extractive industries like the mining sector and the forestry sector,” Clayton Thomas-Muller, a Manitoba Cree who helped organize the Winnipeg session, said in an interview.

“And so it will be First Nations’ interventions and the assertion of aboriginal and treaty rights that is going to stop the plan to build this 4,000-kilometre pipeline.”

Mr. Thomas-Muller works with the Polaris Institute, a left-leaning think tank in Ottawa, and is a spokesman for the Idle No More movement, which has built alliances with environmental groups across the country to oppose resource developments, particularly oil sands pipelines. A loose coalition of groups is launching a campaign on Tuesday to build opposition to the Energy East line.

TransCanada chief executive Russ Girling said last week he expects Energy East to face a relatively easy ride through the regulatory process, compared with Keystone XL, which is stalled by the Obama administration in the United States. TransCanada expects to submit an application to Canada’s National Energy Board by the end of the summer.

“We don’t see any reason we wouldn’t get our regulatory approvals,” Mr. Girling told The Globe and Mail’s editorial board. “We don’t think [the review process] can be hijacked by environmental activists.”

Mr. Thomas-Muller criticized Mr. Fontaine – whom he described as a “living hero” – for representing TransCanada; he said the former national leader has let his business affiliations impair his judgment.

Mr. Fontaine said he fully supports the right of First Nations communities to reject resource projects on their traditional territories, but said the decisions must be based on facts.

Enbridge also faces fierce opposition from aboriginal communities to its Northern Gateway project, which would transport 525,000 barrels per day of diluted bitumen to Kitimat, B.C., to be loaded onto supertankers for export to Asia. The federal government is expected to approve Northern Gateway next month, but First Nations leaders have vowed to challenge any approval in court, and have warned of direct action if legal routes were to fail.

Environmental groups are also gearing up to battle TransCanada on Energy East. Several groups have asked the Superior Court of Quebec to issue an injunction stopping TransCanada from doing construction-related drilling around Caouna, a town on the St. Lawrence River where the company plans to build an export terminal. The environmentalists say TransCanada’s project threatens beluga whales that calve in the area.