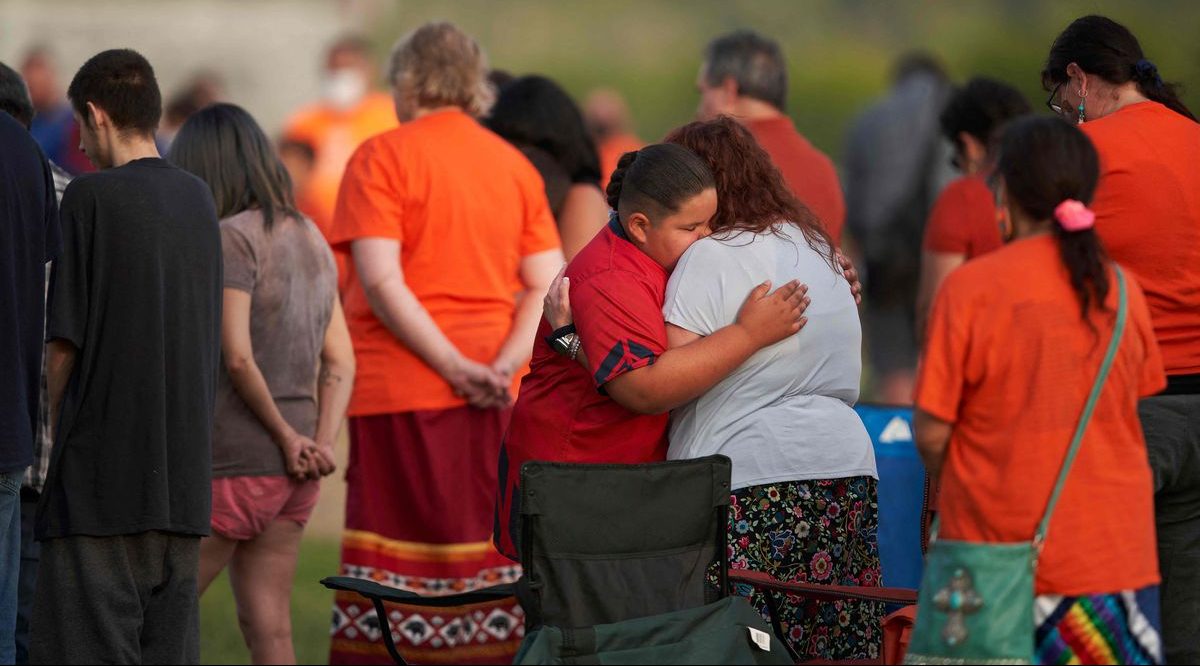 In Show Of Support To Indigenous Peoples.

In Keewaywin First Nation, a remote community in Northwestern Ontario of about 500 people, it won’t be dark enough to set off Canada Day fireworks until 11 p.m. But, this July 1, there won’t be any.

Instead, there will be a candlelight vigil outside the band office, as the community foregoes its traditional holiday activities to honour the hundreds of Indigenous children and adults believed to be buried in unmarked graves recently uncovered at former residential schools in British Columbia and Saskatchewan.

On Wednesday, the Ktunaxa community of Aqam, in B.C., announced that a preliminary search had discovered another 182 burial sites, which they said may belong to children who attended the nearby St. Eugene Mission residential school.

The Keewaywin community is one of a growing number of Indigenous and non-Indigenous communities who are either cancelling or revising their Canada Day events to show respect and support to Indigenous peoples, many of whom have been devastated by the recent gravesite discoveries.

Chief George Kakegamic said Keewaywin had ordered around 150 orange shirts for what they’re calling a Day of Mourning. It will also include a reading of a list of the names of residential school survivors from the community and opportunities for attendees to to hear their experiences.

He hopes the stories resonate with the community’s youth. His own mother was sent to a residential school, but never spoke about her experience. Now he wonders what it was like for her.

“I think we need to make our youth aware of what happened before and continue to let our youth know this happened many years ago and we’re still struggling with it,” he said.

Across the country, this Canada Day will for many mark a moment of reflection on Canada’s devastating residential school legacy. Since the end of May, four First Nations communities have revealed that preliminary searches of former residential school sites with ground-penetrating radar have uncovered an estimated total of 1,148 unmarked graves, many of them believed to belong to children. The first of those communities was Tk’emlúps te Secwépemc in southern B.C.

On Thursday, not far from where burial sites were discovered in an orchard beside the former Kamloops Indian Residential School, Kamloops Mayor Ken Christian will introduce Kukpi7 (Chief) Rosanne Casimir, who will tell the story of Tk’emlúps te Secwépemc as part of the city’s Canada Day observance.

“This is really a teachable moment and we ought not want to lose this opportunity to talk to the entire population of this valley about some of the truths in and around settlement in this valley, and some of the unresolved issues related to the, essentially, cultural genocide which occurred in these residential schools,” Mr. Christian said.

The National Centre for Truth and Reconciliation is holding a sacred ceremony to honour and remember all the children lost to residential schools, as well as those who survived and their families.

Ottawa funded more than 130 residential schools, where an estimated 150,000 Indigenous children were taken from their families in a system designed to strip them of their language, culture and identity. At least 3,200 children are known to have died while at the schools, the Truth and Reconciliation Commission found.

The federal government has opted to move ahead with virtual Canada Day celebrations – fireworks are cancelled for a second year because of the pandemic – that they say will feature Indigenous artists and musicians.

Prime Minister Justin Trudeau said Wednesday at a press conference that there will be a lot of conversations and reflection this Canada Day about how people can commit to reconciliation and justice.

”Each of us in our daily lives can say this is part of my problem, too – my responsibility, too, as a Canadian,” he said.

“That’s what this Canada Day I think will be about for a lot of families. It’s certainly what it’s going to be about for my family,” he added.

At Keewaywin First Nation, which is located about 600 kilometres northwest of Thunder Bay, Canada Day is usually celebrated with festivities that include games like canoe races, food sales, raffles and fireworks. Community members expect fun activities, said Raymond Mason, an elder and former chief who is helping co-ordinate this year’s commemorative activities for the day.

He said previous Canada Day celebrations weren’t significant to him in a patriotic sense, but were rather opportunities for celebration in general.

“I think of myself as a human being first,” he said. “And then Indigenous … and then after that I’m a Canadian.”

Mr. Mason and his wife Pauline, both 72 years old and residential school survivors, are planning to fast from sunrise to sunset on July 1, in what he calls a small gesture to acknowledge the suffering and abuses endured by Indigenous children forced into the residential school system.

“I had this overwhelming feeling, like what I used to feel before [counselling],” Mr. Mason said.

He said it’s important for the community to recognize the amount of suffering that both students and parents endured.

“You’re waiting for your child to come home and they never did. I can’t imagine how they would feel or how they felt,” he said.

Municipalities close to Keewaywin, like Red Lake, Ont., have opted to postpone their Canada Day fireworks. They are asking their communities to reflect on how they can continue to build a better Canada.

Red Lake is a town that Keewaywin members travel through often, and where they park their vehicles when they fly back home from southern destinations. Mr. Kakegamic said the act of support from Red Lake touches his heart and he is encouraged to see other Indigenous and non-Indigenous communities doing the same.

Mr. Kakegamic said the federal government needs to honour the calls to action from the Truth and Reconciliation Commission report.

Mr. Mason said he would like to see a Day of Mourning on Canada Day every year.

“Those children that were buried, they were forgotten for a while, but now that we’ve found the graves we should be remembering that for a very long time,” he said.