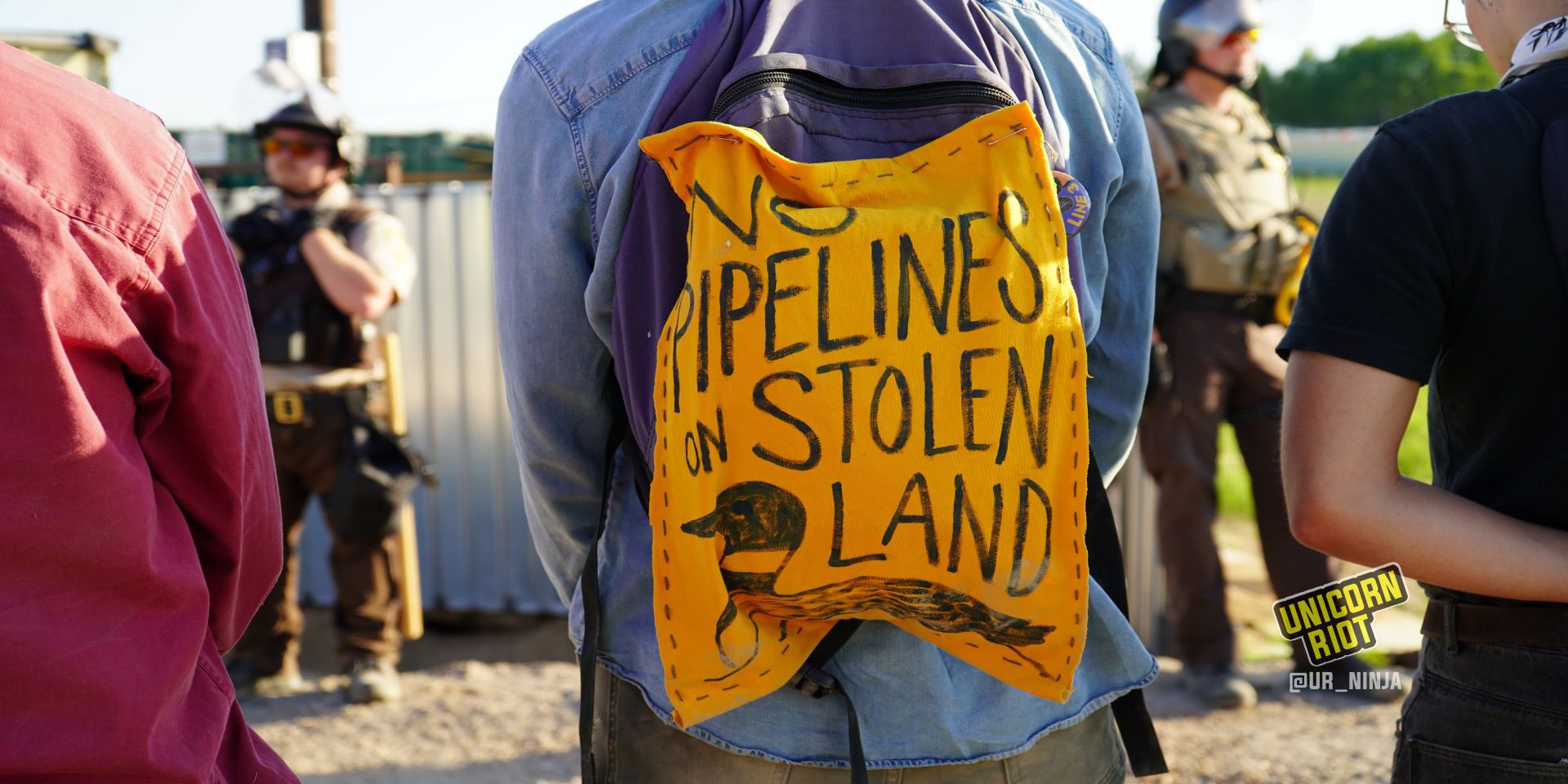 Hubbard County, MN – The first person arrested during this summer’s Treaty People Gathering to take her case to trial was acquitted Wednesday on one gross misdemeanor charge in Hubbard County District Court, marking the first ruling in dozens of cases to be brought from the occupation of the Two Inlets pump station.

Anna Humphreys was one among hundreds of water protectors to arrive at the Enbridge-owned Two Inlets pump station in Anishinaabe territory, northern Minnesota on June 7, 2021.

Acting in solidarity with Indigenous communities resisting the Line 3 replacement project, water protectors occupied the facility for close to 36 hours. Throughout the event, people locked down to equipment and held space to disrupt construction and demand that both Enbridge and Minnesota honor the treaty rights guaranteed by federal law.

While protesting, Humphreys was arrested and charged with a gross misdemeanor for trespass on critical public service property—a charge that carries a maximum penalty of one year in prison, a $3,000 fine, or both.

Despite the charge, Humphreys maintained that she did nothing wrong and acted out of necessity. Considering the rapid rate of climate change and the dangers Line 3 poses to Indigenous communities and the water, taking action that day didn’t feel like a choice, but a requirement, she said.

She planned to argue as much in court. In the weeks before her trial, Humphreys and her lawyer worked to present a necessity defense—a legal argument that says any criminal behavior undertaken by a defendant was done to prevent a greater harm.

But on August 13, Judge Kurt Marben blocked the effort on the grounds that Humphreys didn’t present enough evidence that climate change is an imminent threat that demands direct action. He went on to say that she didn’t exhaust all other legal means to stop the pipeline and that any state-sanctioned activity is protected from interference and excluded from a necessity defense.

Undeterred by Marben’s rejection, Humphreys took her case to trial, and on Wednesday morning, she thanked supporters who gathered to attend the trial and entered the courtroom.

The state argued its case, asserting that Humphreys  trespassed inside the Two Inlets pump station. But despite introducing law enforcement and witness testimony, photographs, and video footage, prosecuting attorney Anna Emmerling failed to provide any compelling evidence to support the charge.

Testimony from Hubbard County Sheriff’s Office Investigator Chad Olson confirmed that protesters were arrested both inside and outside of the pump station property throughout the event, but he couldn’t testify that he knew where Humphreys was apprehended.

Similarly, Investigator William “Bill” Schlag with the Hubbard County Sheriff’s Office testified that while he had given a dispersal order from a helicopter at the site and taken aerial photographs before booking water protectors on the ground, he had no personal knowledge about where Humphreys was arrested.

Employees from the Becker County Jail, where Humphreys was held, and a private security employee at the scene also testified, but none of them could confirm that Humphreys was within the Two Inlets pump station. The arresting officer did not testify.

As arguments progressed, Humphreys’ lawyer asserted that the property wasn’t operating as a critical public service at the time of her arrest – a point supported by Olson’s testimony, during which he admitted to seeing unassembled lengths of pipe on the property, suggesting the pipeline wasn’t operable.

After just over two hours of argument, Marben’s judgment came down in Humphreys’ favor Wednesday morning when he acquitted her on the charge.

The lack of a chain of custody coupled with no testimony from anyone who could place Humphreys inside the property led him to the decision, Marben said in his ruling.

While he agreed that there wasn’t enough evidence to show Humphreys trespassed inside the Two Inlets pump station, he didn’t make a ruling about if the property constituted a critical public service.

After an audible sigh of relief and a long hug shared with her husband, Humphreys and her supporters walked out of the courtroom.

Though grateful, Humphreys knows her case was only the beginning of what’s likely to be a long process as Hubbard County seeks to prosecute other water protectors arrested at the Two Inlets pump station this summer.

Humphreys was one of 179 June 7 arrestees whose cases are set to unfold in Hubbard County in the coming months. While she was the first to stand trial on a charge from that day, she likely won’t be the last.

On the courthouse steps after her acquittal, Humphreys emphasized how important it is that people continue to show up in solidarity with Indigenous people fighting this and other extractive projects. If people don’t act now, there may not be another chance, she said.