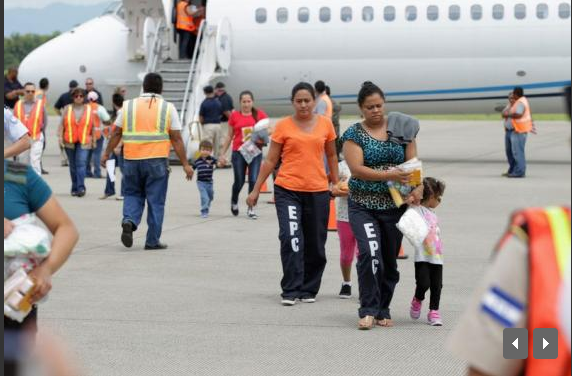 Women and their children walk on the tarmac after being deported from the U.S., at the Ramon Villeda international airport in San Pedro Sula, in this July 14, 2014 handout provided by the Honduran Presidential House.

(Reuters) – The United States deported a group of Honduran children as young as 1-1/2 years old on Monday in the first flight since President Barack Obama pledged to speed up the process of sending back illegal immigrant minors from Central America.

Fleeing violence and poverty, record numbers of children from Honduras, El Salvador and Guatemala have crossed into the United States over the past year, testing U.S. border facilities and sparking intense debate about how to solve the problem.

Monday’s charter flight from New Mexico to San Pedro Sula, the city with the highest murder rate in the world, returned 17 Honduran women, as well as 12 girls and nine boys, aged between 18 months and 15 years, the Honduran government said.

Looking happy, the deported children exited the airport on an overcast and sweltering afternoon. One by one, they filed into a bus, playing with balloons they had been given.

Nubia, a 6-year-old girl among the deportees, said she left Honduras a month ago for a journey that ended when she and her mother were caught on the Mexico-Texas border two weeks later.

“Horrible, cold and tiring,” was how Nubia remembered the trip that was meant to unite the pair with her three uncles already living in the United States.

Instead, her mother Dalia paid $7,000 in vain to a coyote, or guide, to smuggle them both across the border.

Once caught, U.S. officials treated them like “animals”, holding them in rooms with as many as 50 people, where some mothers had to sleep standing up holding children, Dalia said.

During the eight months ended June 15, some 52,000 children were detained at the U.S. border with Mexico, most of them from Central America. That was double the previous year’s tally and tens of thousands more are believed to have slipped through.

So chaotic are the circumstances of the exodus that some of the children are not even correctly reunited with their parents, said Valdette Willeman, director of the Center for Attention for Returned Migrants in Honduras.

“Many of the mothers are sometimes not even the real mothers of the children,” she said.

Immigrant advocates urge him to address the humanitarian needs of the migrants. At the same time, Republicans in Congress have blamed the crisis on Obama’s immigration policies and have called on him to secure the border.

Obama’s administration has stressed that Central American children who cross the border illegally will be sent home, and last week said it would speed up the deportation process.

Honduras, El Salvador and Guatemala have suffered from gang violence and incursions from Mexican drug cartels using the region as a staging post for their trafficking operations.

Honduran President Juan Hernandez, in an interview published on Monday, blamed U.S. drug policy for sparking violence and ramping up migration to the United States. His wife urged the United States to do more to help.

“The countries consuming drugs need to support (us) and take joint responsibility because if there wasn’t demand, there wouldn’t be production and we wouldn’t be living like we are,” Ana Garcia de Hernandez said as she awaited the children.

Obama’s administration has projected that without government action, more than 150,000 unaccompanied children under the age of 18 could flee the three Central American nations next year.

The proposed actions will test Obama’s ability to negotiate effectively with Republican lawmakers who have blocked much of his agenda ahead of a November election when they hope to capture the U.S. Senate from his Democratic Party.