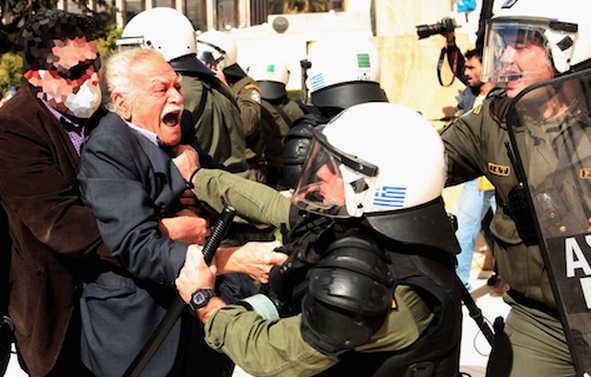 Image: Syriza MEP Manolis Glezos faces off with a riot cop in 2011.

In April 1941, after nearly a year of the Greeks staving off Italian forces, the armies of the Third Reich rolled their tanks into Athens. An Evzoni guarding the Parthenon was ordered to replace the national flag with the fascist ensign. After taking it down, he wrapped himself in the redundant flag and jumped to his death from that democratic theater rock.

One evening, barely two months later, Nazi troops were toasting Hitler’s invasion of Crete. Two boys — including the then 18-year-old Manolis Glezos — armed with a knife and lantern, snuck past them, into the Acropolis and captured the billowing Swastika. That evening they tore it to shreds and buried it, keeping rags as souvenirs. Telegrams blazed around the continent, and the action became a call to arms for resistance movements in Greece and beyond.

Why the harsh treatment?

Throughout his life, Glezos has been sentenced to death three times; spent over a decade incarcerated; been memorialized on a Soviet postage stamp; written six books; innovated new systems of flood preventative water irrigation and has been granted honorary professorships in geology, civil engineering, and philosophy. Now 92, he is one of the most prominent members of Syriza — a coalition of radical left parties that has gone from 3% of the national vote in 2004, to 36% today.

Still on the streets in a 2010 Athenian street protest, Glezos was hit in the face by a riot cop and teargassed by another. In 2012, he became a Member of Parliament, and as of 2014 he is representing the party in European Parliament. Bringing an “anti-government, anti-system and anti-Troika” message to Brussels, he campaigns, amongst other things, for reparations from Germany. Here’s an extract of an open letter he penned last year:

Due to bombings, executions, famine, disease, and reduced fertility our country lost 13.4% of its population. The USSR 10%, Poland 8%. Yugoslavia 6%. At the same time it suffered an incredible economic catastrophe: our infrastructure was destroyed, our resources were looted. At the same time our cultural treasures were stolen and taken to Germany.

And yet, 70 years after the end of the occupation our country has not received from Germany any redress, any compensation! When indeed all of the other countries invaded by Germany have received reparations from Germany. All of them except Greece! Why? And furthermore: the loan Greece was forced to make has not been repaid to our country whereas Germany has repaid the equivalent obligatory loans made by Poland and Yugoslavia. Finally the archaeological treasures and priceless works of art which were stolen from Greece have not been returned. Why? What is the reason for this particularly harsh treatment of us?

‘Harsh treatment’ indeed. In the past four years Greece’s economy has shrunk by a quarter. Child poverty is at 40%. A quarter of a million people are without electricity. Unemployment stands at 26%, and most of these people do not receive benefits. For those in work, job security and wages have been cut and 33% of the population has no health insurance. The list goes on.

The story is a familiar one. The Greek state was lent huge amounts by the IMF and Eurozone countries — it is 175% of it’s GDP in debt — in exchange for brutal austerity conditions to be imposed. Syriza want to stop all of this. The newFinance Minister described the bailout deals, with characteristic Greek flair, as “fiscal waterboarding policies that have turned Greece into a debt colony.” He is now aiming to negotiate 50% of their debt to be wiped off (such a thing has happened many times before, including to Germany in 1953).

Syriza now lead the only anti-austerity government in Europe, with the 40-year-old former communist student leader Alexis Tsipras at the helm. Their emphasis on negotiating with their creditors has drawn criticism from the left, with many accusing them of tempering their views or never really having been that radical in the first place.

Syriza seems to understand the fundamental antagonism of its relationship with the Troika: debtor doesn’t want to pay, lender wants its money back. Along with Spain, Italy, and Ireland, they may have a certain ability to bargain collectively. “We both want us to be in the euro. We’re not going to pay though. Kick us out? Then we’ll all leave and your EU is finished,” so to speak.

Roots in years of struggle

No matter how ideologically brilliant this “formidable coterie of academics, human rights advocates, mavericks and visionaries” may be, there have been two prongs of anarchist practice that have made demands for radical change realistic:

It is only possible for Syriza to exist because of the country’s vibrant, antagonistic culture of direct action and prefigurative politics. They are the result of years of struggle. To talk about party politics without talking of these networks is entirely illiterate.

What happened in Greece is deeply intertwined with social movements around the world. Syriza would mean nothing without, for example, Spain’s Podemos — a one-year old radical leftist party set to win the 2015 elections. Their victory would put an end to the two-party system that has reigned since Franco. Podemos’ leader, Pablo Iglesias, took to a stage with Tsipras a few days before the election. Side by side, punching their fists in the air, they looked like two cute drunk IT-workers as they sang along to Leonard Cohen’s classic:

They sentenced me to twenty years of boredom
For trying to change the system from within
I’m coming now, I’m coming to reward them
First we take Manhattan, then we take Berlin.

The ‘contagion effect’ of this far left victory will resound throughout Europe, boosting support for a range of left parties: Sinn Féin in Ireland, the Greens in United Kingdom, Die Linke in Germany, Parti de Gauche in France, and also in Greece’s historic nemesis Turkey, where marginalized leftist and Kurdish groups such as the HDP have found an ally in Syriza.

The specifics of these groups are unremarkable enough, but the widespread rejection of traditional political parties, and the breakdown of a parliamentary consensus on debt is something new.

There is a feedback loop. Each of these anti-austerity parties is a product of mass social movements. They were created by these social movements, and in turn, the success of these parties will (hopefully) facilitate those movements to progress in creating non-state, non-market networks.

It reaches far beyond Europe. Since 2011, in South America, North Africa, East Asia, and beyond, prefigurative politics have come to the fore in a previously unimaginable way. Around the world, there is a change in common sense about what constitutes democracy, and how to practice it. These behaviors are the murmurs laying ground for our post-capitalist future.

Stepping down from utopia for a moment. The most important reason for thinking outside Europe is simple and ignored: reparations. There is an absence of discussions about what Syriza’s potential successes here could herald. If Germany would repay Greece for the misery it has been in since WWII, it will resound through the (post-)colonized world, and embolden the cries for historical justice long written off as ‘unrealistic.’