Fishing The Plastic Out Of The Ocean

The technique has utilized thousands of littered plastic bottles.

An Amsterdam-based company called Plastic Whale is embarking on a positive initiative to combat plastic pollution by reusing plastic bottles in an innovative and simple way. The company work to retrieve numerous plastic bottles, along with other debris from various canals around the city. Once they have collected a large amount, they then transform the plastic material into a boat, which is cleverly then used to fish for more plastic bottles in the canals, according to reports. Thereby producing an answer to a problem within another solution. The main goal of Plastic Whale is to dramatically reduce plastic pollution and thereby clear the world’s waters of the damaging material. Plastic Whale, which describes itself as the world’s first plastic fishing company, is currently working to solve a huge global problem, with recent statistics estimating around 8 million tons of plastic trash entering waterways every year.

The company’s founder and captain, Marius Smit, told EcoWatch that he imagines the world where waters are completely free of plastic, whilst also hoping to make people aware that everyday materials, such as plastic bottles, can always be utilised in an efficient way, by being transformed into “a valuable raw material.” After launching in 2010, the company has retrieved more than 50,000 plastic bottles and around 10,000 kilos of various waste from the canals of Amsterdam, according to Smit. 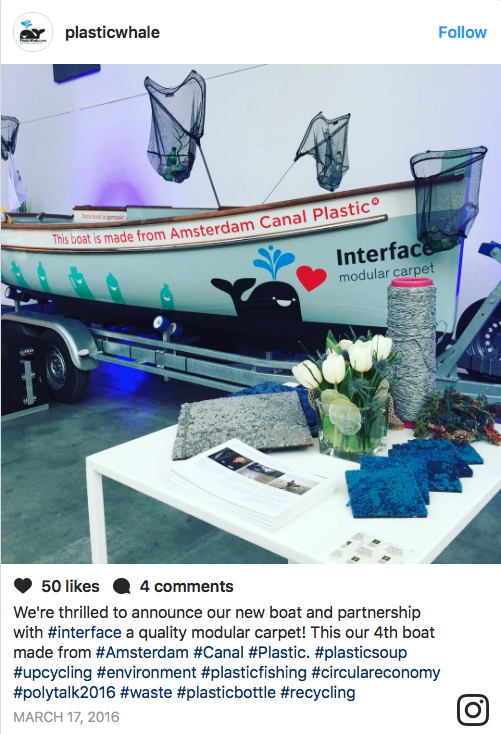 The company currently has seven boats made from plastic bottles that are used by businesses and individuals who go on plastic fishing tours. Their newest boat is made from more than 7,000 plastic bottles and was created in partnership with Interface, the world’s largest carpet tile manufacturer. Together with utilising the plastic bottles, the bottle caps are used to create mosaic designs on the boat flooring.

By creating useful items that are also visually appealing, Plastic Whale hopes to spread the message that plastic should be seen as a valuable raw material, and not valueless waste. They believe that the root of the global problem of plastic pollution is people’s perceptions of the material, which is what they are working hard to change through their company.