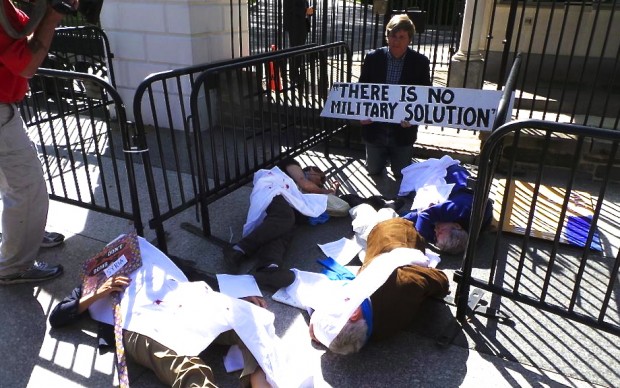 Above Fr. John Dear holds sign while others participate in die-in at the White House. All five were arrested. Photo from Campaign Nonviolence.

Note: The White House demonstration is one of 237 nonviolent actions for a culture of peace taking place throughout the United States and beyond during Campaign Nonviolence Week, September 21-27.  To see everything taking place this week, click here!

Campaign Nonviolence Protest Occurs as US Begins to Bomb Syria

A few dozen proponents of nonviolence demonstrated in front of the White House the morning after U.S.-led airstrikes on targets in Syria.  They attempted to deliver a letter to President Obama calling for drastic changes in policy regarding militarism, poverty and the environment, and they engaged in a civil disobedience action by blocking a White House entrance. Five were arrested.

At the same time, President Obama delivered remarks about the airstrikes in front of Marine One on the White House lawn, touting the strength of a multinational coalition. He then departed for the United Nations in New York.

Signs at the protest said things such as “No U.S. Military Intervention in Syria,” “Reparations Not More Bombs,” and “There Is No Military Solution.” Three demonstrators wore orange jumpsuits and black hoods and carried a banner protesting Guantanamo Bay prison. Several wore blue scarves, symbolizing their identification as global citizens, and expressing solidarity with women and youth in Afghanistan, where the blue scarf movement originated.

The demonstration coincided with the initiation of hostilities against ISIS, the Sunni militant group in Syria and Iraq. Yet it had been planned for some time by the National Campaign for Nonviolent Resistance as one of many events around the country focusing on promoting change through nonviolence. Participants, however, couldn’t ignore the significance of the beginning of U.S. military action in Syria only hours before—one that even Pentagon officials admit might drag on for years.

Many speakers addressed the previous nights’ airstrikes. David Swanson, an anti-war author, had harsh words for President Obama, pointing out that a year ago, he was calling for airstrikes on Syrian President’s Bashar al-Assad’s regime. “Now we have to attack the opposite side in Syria,” Swanson said.

He called U.S.-initiated war in the Mideast “madness” driven by fear and irrationality, when, he said, it is “a region armed to the teeth by the U.S.” “It’s absolute madness to think we have no choices except what Raytheon gives us.” He called for an arms embargo, cutting off the money to ISIS, weapons transfers, and sealing the border to Turkey.

“There is no military solution,” said Medea Benjamin, co-founder of CODEPINK: Women for Peace. She criticized the coalition of allies collaborating with the U.S. She pointed out that Bahrain violently suppressed a peaceful uprising during the Arab Spring, the United Emirates is a repressive regime, and Saudi Arabia is the center of the petro-state–besides executing its citizens by beheading.

She called attention to the fact that with the airstrikes, the U.S. declared that it has new enemy. “We face an imminent attack from a new group, Khorasan. After this one, there will be another and another and another,” she said. “They’re talking about decades of war.”

“The choice is between nonviolence and nonexistence,” said Rev. John Dear of Campaign Nonviolence, the coordinating group for affiliated actions and events across the country, including this one at the White House. “War always sows the seeds for the future. Peaceful means are always the means to a peaceful future,” Rev. Dear said.

Singing “Peace salaam shalom” and “We shall not be moved,” the demonstrators processed to the West Gate, where they wanted to deliver a letter to President Obama.  They had previously requested that a representative meet them at the gate.

The guard at the West Gate was brusk. “Ma’am, letters are not accepted here. You’ll have to mail it,”

The letter, signed by five leaders of organizations Pace e Bene and Campaign Nonviolence, says that “unending war and imperialism is destroying both our country and the world.” It expresses concerns for food insecurity and hungry children when food stamps are cut and the Pentagon budget is “bloated.” It asks three things of the President: to end drone warfare, establish a living wage for workers, and negotiate an enforceable international treaty to address climate change. After the letter was rebuffed, they staged a mock air attack and “die-in.” Five protestors refused to move away from the gate, and police arrested them on charges of “incommoding.”The arrestees–Rev. John Dear, David Barrows, Alice Sutter, Lorena VanderZaden, and Joanne Lingle–were all released this afternoon.