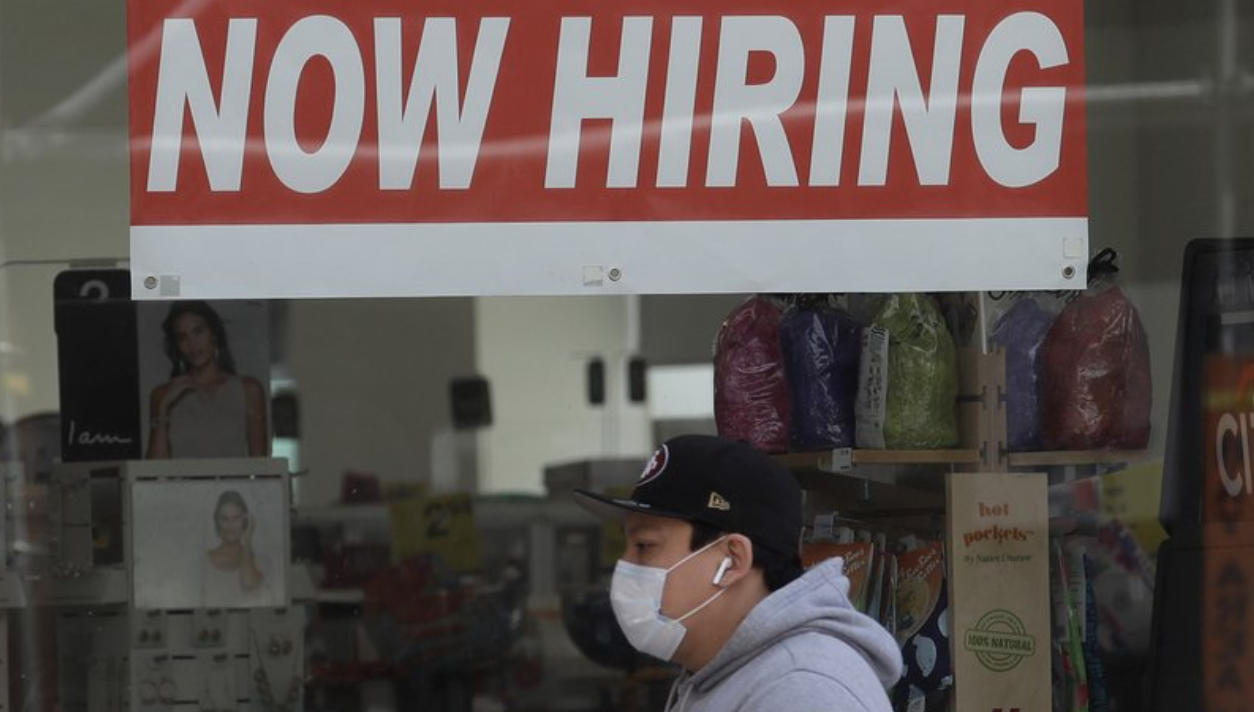 Above photo: This May 7, 2020, file photo shows a man wearing a mask while walking under a Now Hiring sign at a CVS Pharmacy during the coronavirus outbreak in San Francisco. AP Photo/Jeff Chiu.

Washington, DC – Evidence was abundant in the November jobs report that the U.S. economy’s tentative recovery is sputtering as coronavirus cases accelerate and federal aid runs out.

Hiring slowed sharply. Hundreds of thousands of people gave up looking for work. The proportion of the unemployed who have been jobless for at least six months rose.

All told, the Labor Department said Friday, employers added 245,000 jobs in November — the fewest since April, the fifth straight monthly slowdown and well short of the gain economists had been expecting.

Total it all up and the American economy is still 9.8 million short of the jobs it had in February.

Meantime, the viral outbreak keeps worsening. The nation is now suffering an average of 189,000 new confirmed infections a day, up from fewer than 35,000 three months ago. States and localities are imposing curbs on business and persuading more Americans to stay home, which means less money spent and fewer jobs needed.

What’s more, 9 million people could lose all their unemployment benefits the day after Christmas — unless Congress approves a rescue aid package before then. Negotiators on Capitol Hill are seeking an agreement.

“The American labor market hit a major speedbump in November due to the second wave of the coronavirus,” Sal Guatieri, senior economist at BMO Capital Markets, wrote in a research note Friday.

Here are five takeaways from the November jobs report:

Unemployment Fell for the Wrong Reason

The unemployment rate declined to 6.7% last month from 6.9% in October. It’s the lowest rate since the outbreak struck in March. But the explanation was not encouraging: 400,000 Americans stopped working or looking for work in November. Because those people weren’t actively looking for a job, they weren’t counted as unemployed. In fact, 74,000 fewer Americans told the Labor Department they were employed last month.

The proportion of adults who are either working or looking for work — what economists call the labor force participation rate — dropped to 61.5% last month from 61.7% in October.

Many of the job gains since April have come from businesses recalling workers they had furloughed when the pandemic struck. The trend continued last month. The number of Americans on temporary layoff dropped by 441,000 to fewer than 2.8 million, down from a peak of 18.1 million in April.

But permanent job losses continued to pile up. That suggests that the coronavirus recession will leave lasting scars on the job market. The number of Americans who regard themselves as permanently laid off rose by 59,000 to 3.7 million, up from just 2 million in April. And the number of people who’ve been out of work for six months or more rose last month by 385,000 to 3.9 million — more than four times April’s 939,000.

These long-term unemployed now account for about 37% of America’s jobless. That’s the highest such proportion since 2013.

Retailers are contending with a fall-off in walk-in traffic and intensifying competition from e-commerce as Americans stay home. It showed last month: Retailers shed nearly 35,000 jobs. They now employ 550,000 fewer people than they did in February. The coronavirus crisis has forced a number of well-known retailers to seek bankruptcy protection, including Brooks Brothers and J.C. Penney.

Conversely, the surge in online shopping has sparked a hiring boom at warehouses and transportation companies: They added 145,000 jobs in November, the most in any month since 1997.

Fueled by record-low mortgage rates and pent-up demand from homebuyers, the housing market is defying the coronavirus. Home construction rose 4.9% in October after climbing 1.9% in September.

Sales of existing homes have risen for five straight months. In October, sales hit their highest level since February 2006, which was not long before the housing bust that triggered the 2007-2009 Great Recession.

Gains for Black and Hispanic Workers

Last month, employment grew by 136,000 jobs for Black workers and 83,000 for Hispanics but fell by 508,000 for whites. (The racial breakdown comes from a survey that is separate from the one that showed the economy gaining 245,000 jobs last month; the two surveys sometimes diverge from month to month.)

Still, the unemployment rate remained much lower in November for whites compared with the others: 5.9% unemployment versus 10.3% for Black workers and 8.4% for Hispanics.