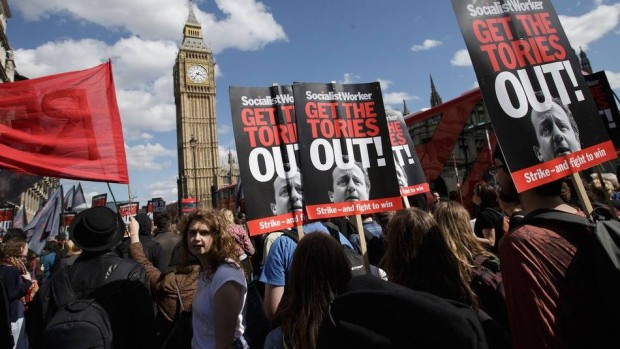 Above photo: Protesters demonstrate against the Conservative government in Westminster, London, Saturday, May 9, 2015. Mashable.com

What Fresh Hell Is This?

United Kingdom – It’s been an astonishing election, one that stumped the betting markets, gave victory to the Tories and left almost everyone else reeling and wondering, in the words of Dorothy Parker, “What fresh hell is this?”

Amid the highest voter turnout since 1997, Prime Minister David Cameron and his Conservative Party trounced the opposition to return with a majority 331 seats (out of 650). Ed Miliband (Labour) and Nick Clegg (Liberal Democrats) have now resigned as leaders of their parties. Unencumbered by the centrist Lib Dem coalition, the Tories will have free rein to advance their brutal politics of inequality.

Cameron, an almost Monty Python-esque upper-class caricature, will lead Britain further down the murky path of austerity, privatization, increased surveillance and jingoism. The Tory electoral victory has, for now, annihilated multiparty politics and emboldened British nationalism to a dangerous degree.

If this sounds extreme, let’s turn first to the Tories’ program of 30 billion pounds ($46 billion) in cuts. This program, what some have called a “secret plan,” contains 12 billion pounds ($18.5 billion) in cuts aimed at some of Britain’s most vulnerable. It includes increased taxes on benefits for the disabled and massive reductions in benefits to caregivers and struggling parents.

One result is likely to be a greater need for food banks. Under the Tories, the number of food banks has already increased from 56 to 445, and, according to a University of Oxford study, the Conservatives’ cuts will force 2.1 million Britons to use food banks by 2017-18, double the current figure.

Ignoring the root causes of food-bank dependency, Cameron’s party will ensure that the wealthy are protected above all else. Even though his government came to power in 2010 on a deficit-reducing platform, government spending has been reduced by only 3 percent, and the money cut from services has in fact been recycled into lavish tax breaks for the rich—a 7-billion-pound prize (almost $11 billion) for returning Cameron to Downing Street.

Over the next five years, inequality will be deepened by a 10 percent cut in school funding and the “stealth privatization” of the National Health Service (NHS). Undoubtedly, the attack on the world’s premier public health care system is one of the most heartbreaking aspects of the Tory tenure. In March, Cameron signed the largest privatization deal in the system’s history, worth 780 million pounds ($1.2 billion), and increased NHS privatization by a staggering 500 percent in the last year. As an article in Open Democracy has pointed out, the U.K.’s transition toward the U.S. model was affirmed by Cameron’s Health and Social Care Act, which ended the government’s duty to provide its citizens with health care, a duty that had existed in some form since the NHS was created by Labour in 1948.

The coming years will also bear witness to an assault on the basic rights and freedoms of U.K. citizens. Now that the Conservatives are free from the constraints of the Liberal Democrat coalition, their next term will see a boost in surveillance under the Snooper’s Charter. This legislation, previously blocked by the Lib Dems, “is expected to force British internet service providers to keep huge amounts of data on their customers, and to make that information available to the government and security services,” according to The Independent.

“Speaking in January,” The Independent continues, “[Cameron] said that there should be no form of communication that the government was unable to read—likely causing chaos among the many internet services that rely on encryption to keep users’ data safe.”

Cameron’s government also is expected to keep its promise of scrapping the Human Rights Act and replacing it with a British bill of rights. What exactly this new bill of rights will be remains unclear, but as Labour’s justice spokesman, Sadiq Khan, said: “I’ve lost count of how many times the Tories have promised a British Bill of Rights. But still they can’t spell out how it would differ from the Human Rights Act. If it is different, Cameron needs to be honest with the British people and say which rights he wants to strip from them—the right to a fair trial, the right to life or perhaps the right to privacy or freedom of expression?”

In 1951, the U.K. was one of the first countries to ratify the European Convention on Human Rights, which was championed early on by Winston Churchill as a means of preventing the re-emergence of fascism. What the new, selective approach to human rights will offer is a shameful destruction of that legacy. What this also provides is a symbolic rejection of European Union “meddling” in Britain’s governance—a rejection that Cameron’s now-imminent 2017 EU referendum will advance, especially when it comes to restricting immigration and migrant rights.

Euro-skepticism, however, is nowhere to be found when it comes to Tory support for the disastrous Transatlantic Trade and Investment Partnership (TTIP) deal, which will transfer a significant amount of Britain’s sovereignty to multinational corporations. In addition to its assault on democracy, the TTIP will further endanger the U.K.’s public services (including the good old NHS) and may spell huge job losses.

In this fresh hell, Cameron and his soon-to-be-unleashed radical agenda will preside over widening inequality and the further dismantling of social protections. As the shock subsides, inevitable questions will emerge about how Britain’s left will fight back. But with Miliband’s failed attempt at a slightly softer neoliberal agenda offering no real alternative, the next five years require a stronger fight than ever.