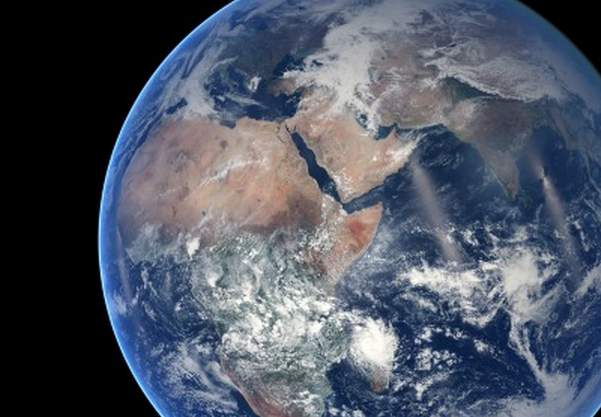 There are two photographs that are said to have fundamentally altered the way humans perceived their place in the universe.Earthrise (1968) and The Blue Marble (1972) were two of the first photographs taken of the Earth from space.

These photographs appeared around the same time as Rachel Carson’s groundbreaking book, Silent Spring—which helped to increase the general public’s awareness of environmental issues—and also around the time that the environmental organization, Greenpeace was created. The first Earth Day was organized in 1970, and the modern environmental movement began. The world would never be the same.

Today, in 2015, we live in a time of rapid transformation. Some say we are on the verge of a great shift in human consciousness. Growing numbers of people are looking at the way they live, the way humans operate on the planet, and deciding that we must change our course.

Once a paradigm has shifted, there is no going back. We emerge on the other side with a completely renewed perspective, unable to return to our old way of thinking. Many great movements have emerged in recent years, pushing us to leave behind old beliefs, reimagine the map of the world, and open our eyes to a brilliant new future.

The theme of Earth Day 2015 is “It’s Our Turn to Lead.” Here are five movements that are leading the way in creating paradigm-shifting change for the Earth:

Idle No More calls on all people to join in a peaceful revolution, to honor Indigenous sovereignty, and to protect the land and water.

A Few of their Current Initiatives

By protecting sacred indigenous lands and the rights of the people who live there, Idle No More is defending the last wild places in North America. It is critical to the survival of the Earth that these lands remain free and untouched, and that the indigenous people who call them home are free to honor the sacred powers of the Earth in accordance with their own cultures and beliefs.

2. Keep The Oil In the Ground Movement

To prevent global temperatures from exceeding catastrophic levels, it has been estimated that at least two-thirds of the world’s remaining oil must stay in the ground.

What Makes this Movement Unique

Many diverse grassroots groups, such as XL Dissent, CONAIE, and The Pacific Climate Warriors, as well as larger organizations such as Amazon Watch, Rainforest Action Network, and the Pachamama Alliance, have joined forces for this cause.

As referenced by Bill McKibben’s 350.org, the Earth can only withstand a certain amount of carbon being released into the atmosphere before climate change will accelerate and the planet will no longer be livable for most of Earth’s creatures … including humans. If we can stop the extraction and burning of fossil fuels like oil and coal, as well as restoring forests and reducing global energy consumption, scientists are hopeful that we can slow or stop climate change.

A movement of women & girls fighting climate change by taking practical action in our everyday lives.

What Do They Do?

By asking questions like “Can you cut 1 metric ton of carbon pollution out of your life?” 1 Million Women encourages a commitment to immediate and personal action to reduce our impact on the environment. Thought-provoking blog stories like this one, with pictures of eye-opening street art illustrations of climate change, bring home the message that climate change is affecting all of us.

With a goal of educating 1 million women about climate change and by providing close-to-home guidance for cutting carbon pollution, the efforts of 1 Million Women directly benefit the Earth. As their founder states, their movement is contagious: “I believe a million women will tell a million more and lead a million communities.”

Slow Food envisions a world in which all people can access and enjoy food that is good for them, good for those who grow it, and good for the planet.

How This Is Changing the World

Slow Food recognizes that there is a worldwide tendency toward placing convenience ahead of health and quality in meal choices. The slow food movement organizes events and activities that remind people of the intrinsic value of traditional and home cooked foods prepared with plenty of love and natural ingredients.

The slow food movement promotes these ecologically healthy changes in our global food system: Less use of chemicals in farming; reduce the excessive use of water in farming; prevent the massive clearing of vast parcels of land for ranching and farming that supports fast food; reduce food waste.

5. The Children and Nature Movement

A world in which all children play, learn, and grow with nature in their everyday lives.

What Makes This Movement Special

Studies show that children today spend less time outside than any generation before them. The Children & Nature Network supports and links researchers, parents, educators, and health care providers who have an interest in renewing children’s connection to nature.

When children are raised with an awareness and appreciation of nature and the Earth, they will naturally grow up with a belief that the Earth is sacred and special. It is critically important that our children keep the soulful connection with nature that our ancestors of past generations have always had. Then they will grow up to be the ones who defend and protect the Earth in the decades to come.

Your Role in Shifting the Paradigm

At Pachamama Alliance, we believe that it’s Up to Us to create the change we want to see in the world and each of us must make change. We cannot wait for governments or lawmakers to do it for us. Just as the people in the movements listed above have done, you too can start with one or two people, perhaps a small group, and ignite the fire of change that will travel around the world to create a new reality. A new paradigm will emerge, and the world will be forever changed.

Join the Up to Us engagement pathway, designed to engage people in innovative game changing solutions, and discover how to use your special talents and interests to light your own fire in the world.

The Game Changer Intensive is a seven-week online course designed to educate, inspire, and equip you to be a pro-activist leader, a game changer in your community.