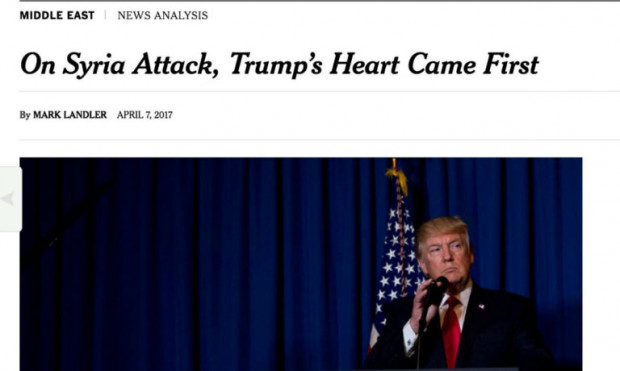 Above Photo: Not The Onion.

Five major US newspapers—the New York Times, Washington Post, USA Today, Wall Street Journal and New York Daily News—offered no opinion space to anyone opposed to Donald Trump’s Thursday night airstrikes. By contrast, the five papers ran a total of 18 op-eds, columns or “news analysis” articles (dressed-up opinion pieces) that either praised the strikes or criticized them for not being harsh enough:

Editorial: Trump’s Chance to Step Into the Global Leadership Vacuum (4/7/17)
Trump Enforces the ‘Red Line’ on Chemical Weapons (4/6/17)
Trump Has an Opportunity to Right Obama’s Wrongs in Syria (4/6/17)
Syrian Opposition Leader: Trump Has a Chance to Save Syria (4/7/17)
Was Trump’s Syria Strike a Moral Impulse or a Policy Change? (4/7/17)
Will Trump’s Decision to Strike Syria Reset His Presidency? (4/7/17)
Trump Might Be Going to War. But He Has No Plans for Establishing Peace (4/7/17) (Though the piece has criticism of Trump, it starts by declaring that the missile strikes were “an appropriate response to an act of unspeakable horror.”)
Wall Street Journal

Cable news coverage was equally fawning. In the hours immediately following the attack, MSNBC had on a seemingly never-ending string of military brass and reporters who uncritically repeated the assertion the strikes were “proportional” and “limited.” MSNBC didn’t give a platform to a single dissenting voice until four hours after the attacks began, when host Chris Hayes, according to his own account, had on two guests opposed to the airstrikes in the midnight slot. MSNBC host Brian Williams got into a bit of hot water when he lovingly admired a slick video sent over by the Pentagon showing tomahawk missiles being fired from US navy vessels (FAIR.org, 4/7/17).

Due to the mostly bipartisan support for the airstrikes, it’s somewhat predictable that corporate media would follow suit. No need to debate the morality or utility of the strikes, because the scene played out per usual: Dictator commits an alleged human rights violation, the media calls on those in power to “do something” and the ticking time bomb compels immediate action, lest we look “weak” on the “global stage.” Anything that deviates from this narrative is given token attention at best.