An economic rescue package must include a nationwide initiative to retrofit homes and public buildings for low-income and people of color families and communities.

I am getting some serious 2008 flashbacks these days. Our economy is going into what could become a serious recession, and our political overlords want to use it as an excuse for even more handouts to big banks, big oil, big airlines, and assorted other industries who already have too much. Meanwhile, communities and workers impacted by the downturn get only “trickle down.”

The resources the powers that be are planning to direct to industries should instead be directed to the most impacted communities – communities of color, Indigenous communities, and low-income communities. And a significant component of that must go to energy efficiency, with the funds going to cities and counties, tribal governments, and nonprofit organizations to fund major energy efficiency retrofits for their most vulnerable residents (as well as community institutions such as schools, libraries, and small businesses).

Why energy efficiency? Here are five good reasons why.

According to the only report the U.S. Department of Energy ever did on energy jobs (before the Trump administration discontinued it), energy efficiency jobs numbered 2.18 million in 2016, about twice the total of fossil fuel jobs. And this is based on a very expansive definition of fossil fuel jobs, encompassing extraction, fossil fuel burning power plants, and even the supply chain for coal mining and oil and gas drilling equipment manufacture.

Every million dollars invested in building retrofits for energy efficiency creates 11.9 jobs, a University of Massachusetts study found, compared to only 3.7 jobs in oil and gas.

And these are good jobs. The median hourly wage for electricians (the wage such that half of electricians earn less and half earn more) is $26.53 according to the most recent Bureau of Labor Statistics occupational wage data, and the corresponding numbers for HVAC workers and roofers are $22.89 and $19.22. These are some key occupations in energy efficiency work. By way of comparison, the median wage for all occupations is $18.58.

So, what should the federal government put public funds in for an economic stimulus – a sector that is a proven job creator, with lots of good jobs, rapid job growth, and more jobs created for every dollar invested? Or a stagnating sector with fewer jobs, slower growth, and less “bang for the buck” in terms of job creation?

2. Energy Efficiency Delivers Economic Benefits to Those Who Need Them Most

Unsurprisingly, the lower your income, the greater the share of your income you pay on your energy bills. Low-income households on average spend more than 17 percent of their income on energy bills, compared to 3 percent for households who aren’t low-income, according to the Department of Health and Human Services (HHS) data. A low-income household is defined as a household with annual income less than the  greater of 150 percent of HHS Poverty Guidelines and 60 percent of state median income. 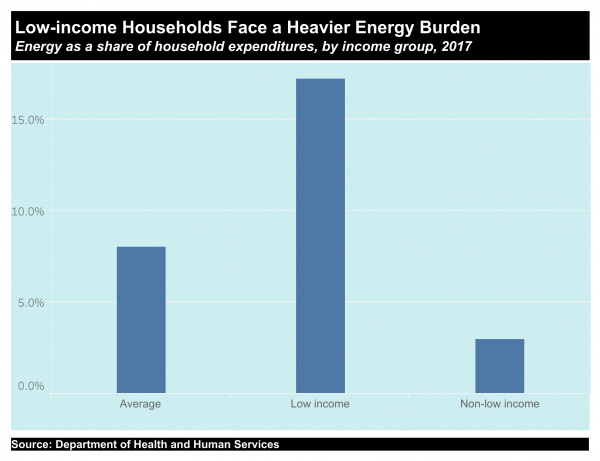 As many as 31 percent of American households face energy insecurity, defined as facing utility disconnection, or being forced to choose between paying energy bills or paying for other essentials like food or medical care, or keeping the home at an unsafe temperature (too cold in the winter, or too hot in the summer) to be able to afford their utilities. This is already unacceptably high, but it gets worse – the numbers are 54 percent for Native Americans, 52 percent for African Americans, and 50 percent for households with incomes less than $20,000.

Energy efficiency targeted at Indigenous, Black, and low-income households will save them money that may make the difference in their being able to pay for food and medical care, or keep the lights on, or even survive.

As an emergency measure, there must be a moratorium on energy and water utility shutoffs and late fees, and restoration of service to customers whose service has already been shut off, even as a stimulus package that includes energy efficiency, distributed energy systems, and water conservation is being worked out. More than 575 organizations have signed on to a letter calling on governors, mayors, and utility regulators to put these emergency measures in place.

Importantly, investing in energy efficiency is a form of economic stimulus. Saving households money on their utility bills will leave them with more disposable income to purchase other essentials.

This should be an obvious point – if the demand for household and commercial energy consumption goes down, we need to burn less fossil fuels to meet our energy needs, and our emissions go down.

The Deep Decarbonization Pathways Project (DDPP), an international research consortium, has found that U.S. energy use must decrease between 18 and 22 percent below 2014 levels by 2050 to meet a 2 degrees Celsius global surface temperature increase target – which means it must decrease even more to meet the 1.5 degree target which we now know to the be the upper limit for warming that’s compatible with a habitable planet.

This strengthens the argument for a large federal funding program for energy efficiency – in addition to short to medium term economic stimulus, it provides medium to long term climate mitigation benefits.

Besides emitting carbon dioxide, fossil fuels produce all kinds of toxic pollution at every stage from extraction through combustion to waste disposal. Reducing fossil fuel usage will reduce all these impacts.

Burning fossil fuels emits particulate matter, nitrogen oxides, and sulfur dioxide, which have serious health effects including asthma and cancer. And like so much in our unequal society, these harms are not equally distributed. The average asthma rate for the U.S. population is 7.9 percent – but it’s 10.1 percent for African Americans, 11.7 percent for people below the poverty threshold, and 12.8 percent for Puerto Ricans.

A major energy efficiency program will produce tangible health benefits for many communities, particularly frontline communities who bear the greatest burden from our dirty energy system.

For projects to provide an economic stimulus, they need to be operationalized as soon as possible, so the jobs get created and the money starts flowing.

Energy efficiency projects fit the bill. Retrofitting any one building – even a large public school or apartment building – represents a low capital investment (as against, say, building a new airport). So it’s easy to start small right away and scale up as more funding comes in.