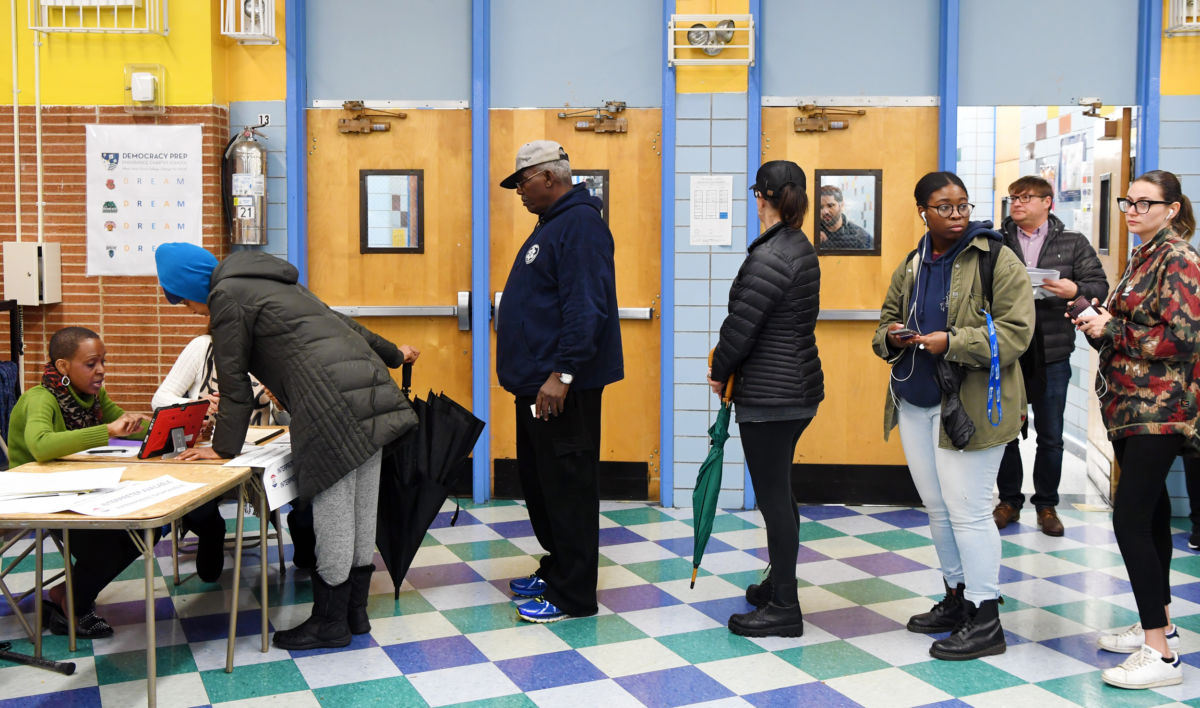 Above Photo: Voters register at a polling station in Manhattan, New York, on November 6, 2018.XINHUA / LI RUI VIA GETTY IMAGES

Sen. Cory Booker’s announcement on February 1 that he is entering the 2020 presidential race brings the number of African-American Democrats seeking their party’s nomination to two, making the crowded primary field the “most diverse in history,” according to The New York Times.

But while The New York Times, cable news and other liberal pundits exult in the White House bids of Booker and California’s junior U.S. Sen. Kamala Harris, African Americans, ironically enough, have not uniformly mustered nearly as much enthusiasm for either candidate. “Cory Booker is running for president, y’all,” the popular African-American YouTube blogger Tim Black declared in a video hours after Booker’s announcement. “Who’s excited?” he asked mockingly with the sound of crickets chirping in the background.

“Kamala Harris won’t get my black vote and she can kiss my black a$$!” reads the YouTube headline of a video released by the African-American blogger who bills herself as Mechee X on her Fly Nubian Queen channel.

Black and Mechee X’s critiques are representative of the ennui and even hostility that characterizes African Americans’ response to the possibility of the nation’s second Black president, which is largely attributable to the fact that while we were distracted celebrating the first, someone walked into our homes and almost literally stole everything we own. Not since a severe financial downturn shuttered the Freedman’s Bank in 1874have African Americans lost as much of our wealth as we did during Barack Obama’s eight years in office. Household wealth for the median Black family in the U.S. nosedived during the Obama administration, reaching roughly $3,600 in 2017, or about 2 percent of the $147,000 median net worth for an average white family, according to a study of Federal Reserve data compiled by the Institute for Policy Studies. More than a third of all African-American families have zero or negative wealth, while the typical Black family in Boston has a net worth of all of $8.

That yawning racial wealth gap certainly did not begin on Obama’s watch, but his administration’s handling of the 2008 financial meltdownessentially erased all of the savings and investments accrued to a generation of African Americans. Central to that economic crisis was the proliferation of high-interest home loans, or subprime mortgages, which triggered the collapse of the global real estate market. An analysis by the Economic Policy Institute of data compiled at the zenith of the real estate boom found that 53 percent of all Black borrowers were issued subprime loans, compared to 47 percent of Latinos and a quarter of white borrowers. In New York City, African-American home buyers in 2006 were four times more likely than whites to be saddled with a subprime mortgage, wrote Columbia University sociologist Saskia Sassen in the book White Collar Criminals and the Financial Meltdown, citing data compiled by New York University’s Furman Center for Real Estate and Urban Policy. Meanwhile, another study found that between 2004 and 2008, only 6.2 percent of white borrowers with a credit score of 660 or higher received a subprime loan while the rate for Black borrowers with similar credit scores was 21.4 percent. In fact, the lending disparities actually widened when households with higher incomes were compared, meaning that an African-American family earning more than $200,000 a year was more likely to be given a subprime loan than a white family making less than $30,000 annually, leaving New York University Sociology Professor Jacob Faber to conclude that borrowers of color were targeted not because they were credit risks, but because they weren’t.

The difference is this stark: In the nation’s most prosperous majority-Black county, the Washington, D.C., suburb of Prince George’s County, Maryland, one in every 624 homes is in foreclosure, while across the Potomac River in Fairfax County, Virginia, where two of every three residents is white, the ratio is one in every 5,189 homes.

What has befallen Black America is the heist of the century, a Ponzi scheme so cataclysmic that it has not only capsized the global economy, but it has also shone a light on slavery’s vibrant afterlife, in which the African-American proletariat has been assigned the role of a permanent debtor class. It is this segment of the population from which all others (but principally, the white elite) are “entitled” to extract wealth — akin to 42 million ATMs stretching the breadth and width of the US.

What has befallen Black America is a Ponzi scheme so cataclysmic that it has not only capsized the global economy, but also shone a light on slavery’s vibrant afterlife.

Good-faith actors can certainly debate the scale of government redress, but historically, policymakers internationally have responded to debt crises of the magnitude of the 2008 contraction by forcing big creditors to accept a reduction, or “haircut” on their loan portfolios, freeing up consumers’ cash and restoring the buying power that is the fuel source for any capitalist economy. Secondly, government regulators indict, prosecute and ultimately jail lenders for fraud and other white-collar crimes in an attempt to discourage wrongdoing or “moral hazard” in the future. During the savings and loan crisis, for example, the Department of Justice, under the Republican administrations of Ronald Reagan and George H.W. Bush, jailed hundreds of them, including Charles Keating, whose Lincoln Savings and Loan scandal cost taxpayers $3.4 billion.

The failure of Lehman Brothers in 2008 cost taxpayers nearly 10 times that amount, and yet the Obama administration did not prosecute a single Wall Street executive for malfeasance. Indeed, the nation’s first Black president bailed out everyone except the very people who were swindled out of their homes and life-savings, purchasing toxic paper from unscrupulous lenders for 100 cents on the dollar, repaying the investors who purchased the liar’s loans and other fraudulent financial instruments, and showering the big banks and corporations with trillions in cheap money in a bid to effectively re-inflate the speculative bubble and send the stock market soaring.

African Americans, on the other hand, are confronted with an existential crisis, the likes of which no one alive has ever seen. The subprime loan scandal represents the culmination of a 45-year effort to stop the advance of liberal democracy birthed by the labor organizing struggles of the New Deal. At the center of that movement were the Communists and the Black worker, whose voice in public policy has been gradually silenced as neoliberalism has hollowed out both the manufacturing economy and the labor unions. For capital, this raised the question: How do we continue to exploit African Americans in an economy where their labor was no longer critical?

The nation’s first Black president bailed out everyone except the very people who were swindled out of their homes and life-savings.

The answer: by turning the worker, generally, and the Black worker specifically, into a perpetual debtor.

In a material sense, slavery has continued practically unabated. Consider that when Abraham Lincoln signed the Emancipation Proclamation on January 1, 1863, Black people owned one-half of 1 percent of all assets in the U.S. More than a century-and-a half later, according to The Color of Money, by Mehrsa Baradaran, the Black share of the nation’s total wealth has doubled to all of 1 percent. For all intents and purposes, Black Americans have no greater stake in the country of our birth than what we had when the first recorded African stepped foot in the “New World” in 1619.

Let that sit for a moment.

When a speculative real estate bubble triggered a global financial crash in 1873, white executives of Freedmen Savings and Loans hired the most visible African American of his day, Frederick Douglass, to forestall a run on the bank by Black depositors. Oblivious to the role that corruption played in the bank’s insolvency, Douglass agreed, and when the bank inevitably failed the following year, Black customers lost everything they had accumulated in the decade since Emancipation.

Black Americans have no greater stake in the country of our birth than what we had when the first recorded African stepped foot in the “New World” in 1619.

As African Americans reflect on their losses over the last decade, many have begun to question the loyalty of a Black political leadership that is increasingly seen as complicit in covering up the crime of the century. Booker has been criticized as being a champion of charter schools, a foe of lowering prescription drug prices and a sock puppet for the same moneyed interests responsible for the subprime debacle. And as California’s Attorney General, Harris, rather famously declined to prosecute former OneWest Bank CEO Steve Mnuchin, despite her own staff’s investigation, which concluded that Trump’s (now) treasury secretary may have illegally foreclosed on as many as 80,000 borrowers. Yet, as San Francisco’s top prosecutor, Harris prosecuted parents of truant children.

“Stop thinking that Black faces in high places is what we need,” the blogger Rick Wallace screamed on his YouTube channel.

The notion that Black suffering provides whites and others with a certain succor has come to be known in recent years as “Afro-Pessimism.” Indeed, it has gained a certain cachet both in academic circles and among the Black Lives Matter generation, reared on a steady diet of videotaped police terror, shrinking job and educational opportunities, and a duopolistic political system that is, on its best day, wholly unresponsive to working people, generally, and nonwhite working people specifically. At its most molecular level, as the late, great historian John Henrik-Clarke posited, Afro-Pessimism is the understanding that the descendants of Africa have “no friends nowhere,” and that our oppression is not rooted in either Marxist or feminist theory, but in our Blackness and the unique contempt reserved solely for us.

But just as Obama’s failure to indict a single police officer for the slaying of an unarmed Black man is evidence that whites are invested in murder as an affirmation of a privileged white identity, so too is his administration’s refusal to hold a single banker accountable for their financial crimes.

“Collectively, Black people are not falling for the ‘okie-doke’ like we did in 2008 and 2012,” the hip-hop artist known as Willie D said recently on his YouTube channel, noting that Harris’s recent appearance on a popular New York radio show, “The Breakfast Club,” had received more online “dislikes” than “likes.”

“People just aren’t buying what Kamala Harris is selling … All skinfolk ain’t kinfolk … Kamala Harris is a textbook status-quo, shuck-and-jive politician hired to do the bidding for the man.”