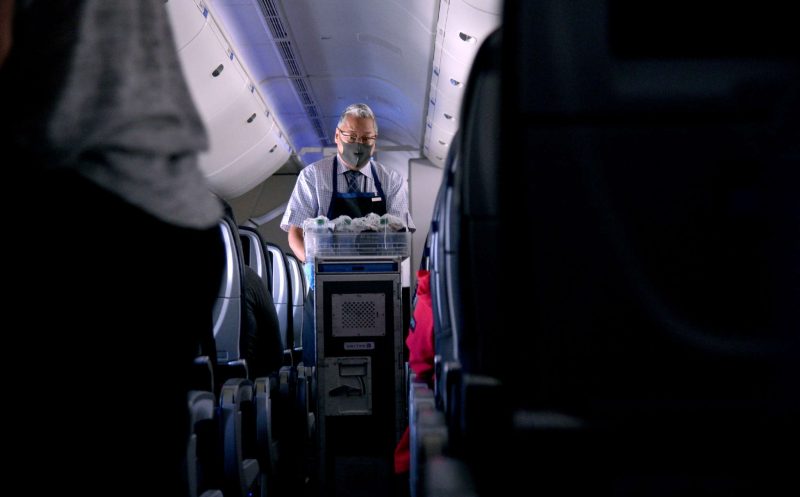 Above Photo: A masked flight attendant passes out refreshments on a flight from San Francisco, California, to Newark, New Jersey, on October 27, 2020. Michael Loccisano / Getty Images.

Flight Attendant union president and labor leader Sara Nelson is criticizing the Centers for Disease Control and Prevention (CDC) for changing its guidance on quarantining for COVID-19 after business leaders asked the agency to cut its recommendations by half, potentially at the cost of public health.

Nelson, the president of the Association of Flight Attendants-CWA International, accused the CDC in a statement of making its decision to benefit businesses that may be experiencing staffing issues, rather than stemming the spread of the virus.

“We said we wanted to hear from medical professionals on the best guidance for quarantine, not from corporate America advocating for a shortened period due to staffing shortages,” Nelson said. “The CDC gave a medical explanation about why the agency has decided to reduce the quarantine requirements from 10 to five days, but the fact that it aligns with the number of days pushed by corporate America is less than reassuring.”

The statement comes after the agency cut its recommendations for quarantining due to COVID from 10 to five days even though many people may still be contagious past that period. The decision was announced shortly after Delta Air Lines CEO Ed Bastian sent a letter to CDC Director Rochelle Walensky asking her to reduce the quarantine time for vaccinated people to five days. He complained that the longer quarantine period “may significantly impact our workforce and operations.”

The CDC has denied that its decision was influenced by corporate giants. But some progressive commentators have also noted that Walensky won’t consider a vaccine mandate for airlines, in line with Bastian’s previous objections to such a requirement. Bastian said earlier this year that vaccine mandates for passengers would cause a “bottleneck” for airlines.

Ironically, though Bastian has framed the easing of pandemic restrictions as helping businesses, allowing continued spread of the virus will only prolong the pandemic, which is still suppressing the economy. The current explosion of cases — with the U.S. breaking its previous record for daily case counts this week — has caused thousands of flight cancellations domestically and internationally during the busiest travel period of the year.

It is an issue not only for travellers but also for aviation workers, who are disproportionately affected by COVID waves. Airline employees are forced to contend with rude and abusive customers who refuse to follow masking and other pandemic guidelines while being exposed to the virus at work. Indeed, airlines have attributed the spread of the Omicron variant to flight cancellations, saying that infections of staff and crew are causing shortages.

Nelson pointed out in her statement that the CDC guidance is a labor issue, and that the health of the workers, and their ability to safely recover and protect their fellow employees from the virus by staying at home, is crucial.

“If any business pressures a worker to return to work before they feel better, we will make clear it is an unsafe work environment, which will cause a much greater disruption than any ‘staffing shortages,’” Nelson warned.

“We cannot allow pandemic fatigue to lead to decisions that extend the life of the pandemic or put policies on the backs of workers,” she continued. “Already the lack of paid sick leave creates pressure on workers to come to work sick. Corporations that fail to recognize this with paid sick leave, or pressure workers to come to work sick or face discipline, are failing their workers and their customers.”