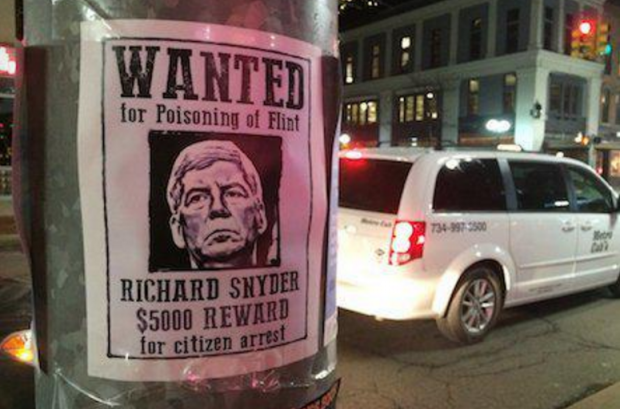 Flint Chess Game: The Politics Of The Battlefield

Above Photo: From blackagendareport.com.

So far, only a few pawns have been sacrificed, and one minor knight has fallen, in the Machiavellian chessboard game that is being played with the lives of thousands who were poisoned by the water in Flint, Michigan. Governor Rick Snyder has not even been question by state or federal prosecutors. “It will only be through political activism and unrelenting protest that the actual political players will be charged and held accountable.”

“Those protected by power have been excluded from the process that is now being exacted against their underlings facing indictments.”

The game of chess is a complicated game employing zero sum, competitive Machiavellian strategies to protect key political or military principals. The object of the game is to checkmate the opponent’s king, and to protect the queen, the most powerful piece in the game, as long as possible.  One fallen knight on the political chessboard of the Flint, Michigan water crisis is Susan Hedman, the EPA Regional 5 Administrator whose callous disregard for the health and safety of Flint citizens triggered her forced resignation although she has escaped any criminal liabilities.

Hedman was sacrificed to protect the EPA Queen, Gina McCarthy who could have used her congressionally authorized emergency powers under to the Safe Drinking Water Act (SDWA) to seize control of Flint’s environmentally dangerous designs created by the governor and the Michigan Department of Environmental Quality. Congress has given the EPA Administrator under SDWA Section 1431 this authority:

“…upon receipt of information that a contaminant that is present in or likely to enter a public water system or an underground source of drinking water, or there is a threatened or potential terrorist attack or other intentional act, that may present an imminent and substantial endangerment to the health of persons, the EPA Administrator may take any action she deems necessary to protect human health.” [emphasis added]

“Gina McCarthy who could have used her congressionally authorized emergency powers to seize control of Flint’s environmentally dangerous designs.”

Thus, Administrator McCarthy failed to exercise her power over both the Michigan Department of Environmental Quality and Michigan Governor Synder.  As a result, thousands of Flint citizens were poisoned with hundreds of children facing a life-time of medical and intellectual challenges.

This week, CNN reported that low-level employees at the Michigan Environmental Quality Commission were indicted as sacrificial pawns in defense of the King, Michigan Governor Rick Snyder.  The chess game is on in earnest now in Flint. However, to be clear, it’s not that McCarthy or Snyder are of any consequence as individuals—it is the power that they so diligently serve that demands their protection.

The King and Queen in this scenario enjoy “sovereign immunity.” These politicos acting on behalf of the “sovereign” operate above the law while the battlefield is strewn with the blood and guts of their minions. While poisoned water flows from taps inside homes, the Royals remain above criminal prosecution, if not investigation. According to news reports, Michigan’s Republican Governor Rick Snyder has not been questioned by prosecutors (neither state nor federal) in connection to the crisis.

“Thousands of Flint citizens were poisoned with hundreds of children facing a life-time of medical and intellectual challenges.”

Similarly, there is no indication that the Department of Justice has placed EPA Administrator Gina McCarthy under investigation much less indictment.

But the pawns feel the tenuousness of their situation and with visions of prison in their future. No question, everyone involved in poisoning thousands of Flint citizens should be held accountable. But, at this point, those protected by power have been excluded from the process that is now being exacted against their underlings facing indictments.

It will only be through political activism and unrelenting protest that the actual political players—whose jobs should be defined by “the buck stops here”—will be charged and held accountable.

This week two state employees were charged with misleading the U.S. government about the poisoning: Michigan Department of Environmental Quality employees Stephen Busch and Michael Prysby. In addition, a Flint employee, Michael Glasgow, was charged with altering water test results.

“The Flint employee charged did make mistakes, but he was also placed in an impossible situation and is not in the same league as the other bad actors.”

One of the heroes of the Flint water crisis has been Dr. Marc Edwards.  Dr. Edwards is a Professor of Civil and Environmental Engineering at Virginia Tech. He is an expert on water treatment and corrosion. It was Edwards’s research on elevated lead levels in Washington, DC‘s municipal water supply that gained national attention and caused the Centers for Disease Control and Prevention to admit to publishing a report so rife with errors that a congressional investigation called it “scientifically indefensible.” He is considered one of the world’s leading experts in water corrosion in home plumbing, and is a nationally recognized expert on copper corrosion.  When asked by BAR to comment on the recent criminal charges brought against low-level state employees, he offered:

“We felt from the start, that environmental crimes were being committed in Flint by both the state MDEQ and an upper EPA administrator.  Apparently others now feel the same way, at least in terms of the state MDEQ.  On the basis of our experience and the evidence I have seen, the Flint employee charged did make mistakes, but he was also placed in an impossible situation and is not in the same league as the other bad actors.”

Had Flint citizens received precautionary warnings and water filters this crisis could have averted. But the same political players who now receive sovereign immunity and protections will remain above the law unless citizens across the country demand accountability.