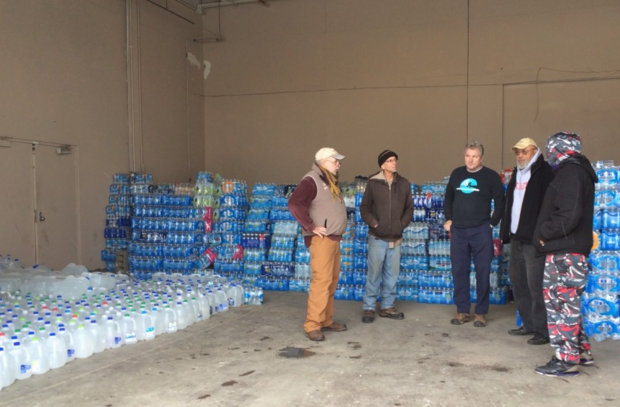 As They Drank Contaminated Water

Not only did Flint residents drink tap water contaminated with lead and other chemicals throughout 2015, but they were also paying the highest prices in the country to keep that poisoned water flowing through their pipes.

A report released by Food & Water Watch on Tuesday confirmed what many residents had long suspected: that their water bills, averaging $140 a month, were the highest in the country. The group found that a Flint resident paid $864.32 a year for water in January 2015, about $500 more than what the typical family in the rest of the country paid for water from other public utilities and more than twice the rate paid in the state generally.

A memo commissioned by the city itself in April 2015 found that the high costs, in a city where 41.5 percent of the population lives below the poverty line, are widely unaffordable, or consumes more than 2 percent of most households’ incomes.

Unaffordable bills may have eaten away at the water system’s revenue base, which could have been directed toward upgrading the city’s infrastructure. The same 2015 memo argued that high bills that residents can’t pay hurt collection efforts in two ways. First, customers who know that putting a smaller amount toward their bill won’t save them from getting service shutoff are more likely not to pay anything at all and put the money toward other necessities, keeping that smaller amount from going to city coffers. At the same time, the city has to spend more on collection efforts to go after customers who aren’t paying.

The memo outlined a number of ways that Flint could have reformed its billing practices to make them more affordable and bring in more revenue, including a plan that would cap bills at a percentage of qualifying households’ incomes, get rid of or reform late fees, and change the deferred payment plan so that it’s more affordable. But the city never implemented the recommendations and never contacted the author after he handed it in.

Later in the year, residents got some reprieve from high rates when a judge ruled that a rapid 35 percent rate increased the city imposed in 2011 violated its own law that hikes be implemented gradually. The judge ordered a halt to any shutoffs imposed on bills that were late under that elevated rate and wiped the slate clean until September. But bills are still reportedly high across the city and people say they have started receiving shutoff notices again.

Residents are now fighting back, particularly in light of confirmation that the water became contaminated when the source was switched in early 2014. Last month a group of them sent 20,000 signatures to leadership demanding a billing moratorium and shutoff prevention. There are also a number of active class action lawsuits against the city and state leadership over the contamination issue, some of which are also seeking reimbursement for the money families have been paying for the water all this time.

They have gotten at least some response: In his recent budget proposal, Gov. Rick Snyder (R) included a call for $30 million as reimbursement for those bills.