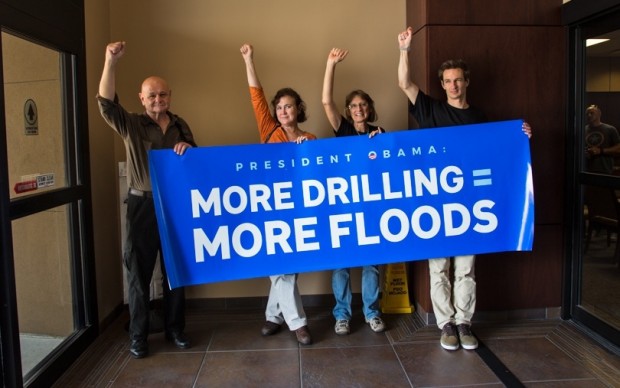 During President Obama’s visit to a flood-ravaged area near Baton Rouge, Louisiana, this week, a group of environmental activists delivered a petition to the Bureau of Ocean Energy Management (BOEM) protesting the planned leasing of more of the Gulf of Mexico for oll and gas drilling.

They gathered 184,000 electronic signatures over just six days calling for the President and BOEM to cancel its lease auction — scheduled to take place today, August 24.

Four members of the group told police on the scene they planned to stay until either they got a response from President Obama or they were arrested.

“I am here to show support for Cherri Foytlin, [a Louisiana activist who runs Bold Louisiana], who started the petition after experiencing the 1,000 year flood that just hit Louisiana,” New Orleans retired teacher Renate Heurich told DeSmog. “She couldn’t be here today because she is still gutting her house.”

“We are not just selling the Gulf. We are selling our children’s future. We are refusing to change our lifestyle and our children’s, who will have to deal with immense problems once the climate gets more and more extreme,” Heurich said before she was arrested.

Anne Rolfes, founding director of the Louisiana Bucket Brigade, met with activists and legal advisors before the action began.

“While climate change affects everyone, communities of color and low-income communities continue to be hit hardest by the lasting impacts of climate disasters,” Rolfes said.

“That’s true in the Gulf Coast, and it’s made worse by the fossil fuel industry’s destructive projects in the region. Thousands of oil spills, sinking land, and extreme weather creating turmoil for countless people. What more will convince the Obama administration to stop treating the Gulf like a sacrifice zone to fossil fuel interests?”

The drilling lease auction will be livestreamed today. The New Orleans venue where bids are read, which had been open to the public in the past, will be closed.

“Protests that disrupted an oil and gas sale in March and an April federal open house about environmental impacts of continued lease sales played a part in that decision,” agency spokesperson Caryl Fagot said on August 22, according to the Associated Press.

Retired Loyola University professor John Clark pointed out the importance of getting word to President Obama during his visit to survey the Louisiana flood damage that he needs to honor the Paris Agreement. Clark believes the leasing of more of the Gulf for drilling goes against the spirit of the agreement.

Meanwhile in Louisiana, there is still standing water in some parishes. And where the water has gone down, there are mountains of what had been the contents of thousands of homes across southern Louisiana.

Heurich cited the fact there have been eight 500-year floods in Louisiana in just over a year, and now this 1,000-year rainstorm. The protesters attribute this extreme weather to climate change.

“How many more extreme weather events do people need to believe the science?” she wondered.

Environmentalists documenting the action for the Bucket Brigade thanked the group for their work as they were led away in handcuffs by the police. Heurich smiled broadly before slipping into the back of a police car.

President Obama toured Zachary, a small city 16 miles from Baton Rouge, where the powerful flood waters not only destroyed homes but also dislodged coffins in a cemetery.

While many celebrate Obama’s pledge to combat climate change, the protesters in New Orleans today feel the imminent Gulf of Mexico drilling lease auction is another example of too little done too late.