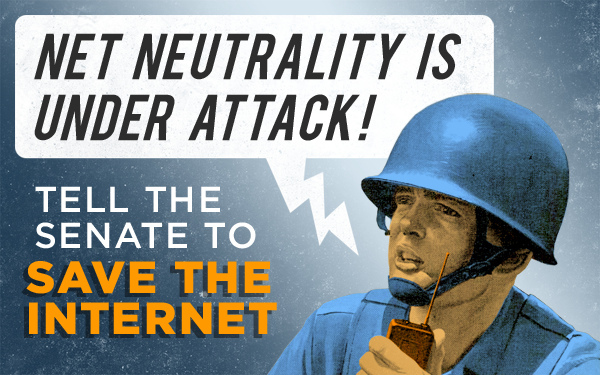 WASHINGTON — On Thursday, Reps. Bob Latta (R-Ohio), Cathy Anne McMorris Rodgers (R-Washington)  and Greg Walden (R-Oregon) announced at a Subcommittee on Communications & Technology hearing that they would introduce separate pieces of legislation they falsely claim will protect the open internet.

Full text for all of these bills was not immediately available or public when Republican members referenced them at the hearing. If passed in reported form, these bills would legalize numerous harmful and discriminatory practices while preventing the Federal Communications Commission from adopting and enforcing rules to protect internet users going forward.

These pieces of legislation all would open the door to new ways for ISPs to discriminate and leave the FCC without sufficient authority to prevent any abuses.

“If you want a few unregulated companies like AT&T, Comcast and Verizon to control the future of communications, these bills are for you. But fortunately, most internet users — no matter their political affiliation or walk in life — don’t want these bills at all. They want real protections for internet openness, competition and affordability, and they know that essential communications networks deserve these basic protections.

“Despite what the new House minority claims, none of these bills would safeguard Net Neutrality or internet users’ rights. They would instead undermine the FCC’s ability to protect people online by removing broadband and wireless companies from nearly all agency oversight.

“The cable industry wants rules that wouldn’t have stopped the streaming-video slowdowns of 2014. These bills wouldn’t address or let the FCC address new dirty tricks that cable operators might dream up. They wouldn’t give the FCC the authority to look into unreasonable data caps or other unjust practices, such as refusing to serve a customer unless they pass a strict credit check. These bills would enable ISPs to exercise their gatekeeper power with almost no restraint.

“What Representatives Latta, McMorris Rodgers and Walden are actually trying to do is permanently declaw the FCC, the one agency responsible for protecting the public interest in communications. Having lost their fight against Net Neutrality in the court of public opinion, and at risk of losing again soon in the court of law, companies like AT&T, Comcast and Verizon are trying to use fake Net Neutrality bills to end all effective oversight of their anti-competitive, anti-consumer practices.

“These industry-written pieces of legislation shouldn’t be taken seriously by any legislator who claims to support Net Neutrality. Lawmakers need to reject fake compromises. The public overwhelmingly supports real Net Neutrality and wants to see decisive action to restore all of the essential protections the Pai FCC took away.

“The solution is simple: Title II is in no way, shape or form a burdensome law for broadband. It’s the law that a bipartisan Congress wrote for all telecom networks, including internet access. Returning to it would restore the FCC’s critical authority to prevent harmful discrimination, and also to promote competition, universal service and access, interconnection, public safety and general consumer protections in an increasingly concentrated market.

“We need real Net Neutrality rules and strong laws to ensure that the internet remains a space where people can fight for racial and social justice, pursue economic opportunities and engage in political speech without risk of ISP interference.

“That’s what the people in America want. If Representatives Latta, Walden, McMorris Rodgers and their fellow Republicans really want to honor their constituents’ wishes, they should restore the real thing rather than backing industry wish lists and pretending that’s good enough.”