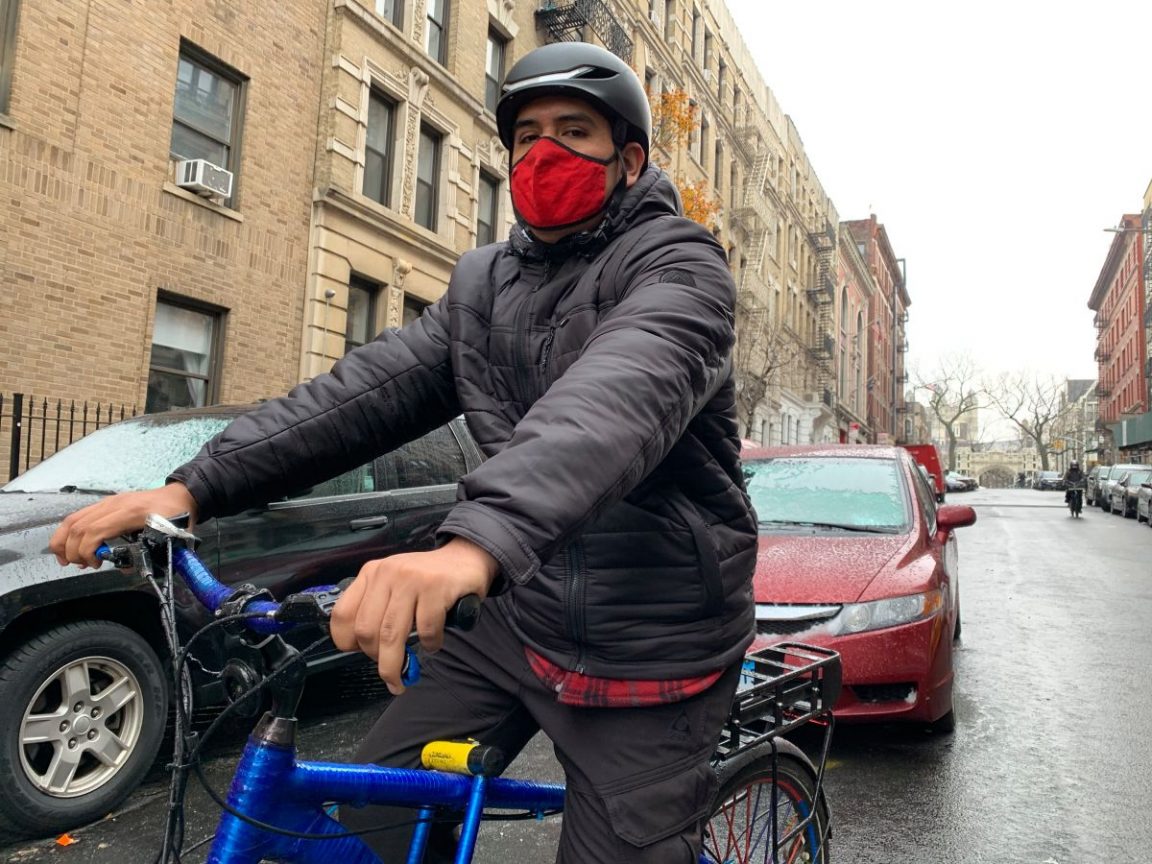 New York – Yellow taxis have for years been a symbol of the visual landscape of New York. The Empire State Building, the Bull of Wall Street, Central Park, Times Square and the famous Subway, stand out in the city that until a few months ago did not sleep. Delivery men running daily on their bikes and their electric motorcycles; some on skateboards and scooters, carrying food orders across the city’s five boroughs, are also notorious in the New York cityscape.

It’s hard not to see them walking everywhere, sometimes more than public service vehicles, with their helmets and bags of food, with the logos of well-known applications or the names of restaurants. But many feel invisible.

They feel that they are not receiving the fair treatment of essential workers that they deserve, with a work that increased after the stalking of the COVID-19 pandemic. They fear that with the closure of the interior service in restaurants, which came into effect on December 14, instead of the “chicken that lays the golden eggs” shines more, which could mean the increase in take-out orders, this become an increase in abusive and exploitative practices.

That is the complaint Fernan Hernandez, a 37-year-old Colombian delivery man, who not only ensures that applications such as Uber Eats, with which he works, sometimes show a value of a tip offered and then at the end, when he makes the final accounts, another amount is reflected much less.

“They are stealing our tips. It is evident, but one does not complain because of the fear that our accounts will be vetoed and that perhaps they will not send us many orders “, says the delivery man, mentioning that there is nothing more offensive than listening to New York leaders, thanking them” ”For being on the front line of the fight, feeding New Yorkers and do nothing for that guild in a particular way.

“They always call us heroes, they tell us that we deserve all the applause and praise for putting our lives at risk, not only for being exposed to the contagion of Covid but for all the risk that being delivery means, and we have no real incentive from the the governor or the mayor, nor do we see that there is interest from them to promote laws that change our lives and make us truly feel as essential, ”said the worker from Queens, demanding urgent legislative action. “We take all the risks. It’s like David vs. Golliat. If something happens to us, no one responds, we put the vehicles, if they rob us they do not respond, we suck cold, rain, snow and blows, and the apps, quiet, billing, without putting anything. They just get rich. We are just a number we are invisible “.

Jonán Huerta, 33-year-old Mexican, who since 2016 makes his living as a delivery man in Manhattan, coincided with his work colleague, and stressed that it is also their daily bread to be mistreated even with basic situations such as shelter from the cold or the rain , and the use of the restrooms of the restaurants where they go to collect their orders.

“They are treating us badly. The biggest thing we need now is financial support, because many need it and do not receive anything, but we also need them to help us talk with the applications so that the business is regularized and that they treat us with true value “, said the” delivery “, who works every day between 7: 00 in the morning and 11:00 at night. “But sometimes you feel so bad about inhumane things, like guys who go to the front of restaurants to wait for orders and you tell them they can’t stand there. Other times we have to wait outside restaurants for up to 45 minutes with intense cold and they don’t lend us a bathroom.

But it has been precisely the abuses and “slaps” with which the delivery men face, which has made them grow the desire to join as a guild to claim for your rights. With the support of the Labor Justice Project, they are organizing to raise their voice and ask to be treated as true essential workers and sheltered with labor protections.

“It is very important that they know that we are uniting to fight together like delivery men from New York. We feel that they are not taking us seriously, because they say thank you tooth and nail. When I go to hospitals they say: ‘real heroes work here’. And what about us, we are too. We have kept this economy up and made people eat. That is why now we no longer want thanks but laws that respect us, ”added the young man.

The leader of the distributors highlighted that last October there was a massive march of more than 1,000 distributors in Manhattan who took to the streets to show that “they are not invisible”, and although he confesses that they have thought about going to a call for a general strike, They do not want to get there so that they will give them the support they cry out for.

“If we did that, the truth is that they would realize in a single day how important we are, but we do not feel good knowing that we are going to let good people eat, we only want immediate actions,” adds the worker.

Ligia Guallpa, director of the organization Labor Justice Project, made a call for more “deliveristas”, as they call themselves, to join the fight plan and mentioned that they already have an agenda of specific requests, and that they even already have the support of legislators such as councilors Carlos Menchaca, Carlina Rivera and Daniel Dromm to promote municipal laws.

“Since the middle of the pandemic, we have been at the forefront as one of the worker centers providing emergency response services and at the same time organizing food delivery people, cleaning workers and day laborers. Food delivery people are the workforce that has sustained the restaurant industry and fed all New Yorkers, without any protection, ”said the activist.

“After 8 months without economic relief and working under inhumane conditions, the delivery men get up to demand essential rights such as: Right to use restaurant restrooms, have a living wage, other than tips, the right to a public place that allows them to protect themselves from extreme weather, essential protections against bicycle theft, tip theft and retaliation of the applications “, added the labor organizer of the “Deliveristas Unidos” project.

Other demands that deliverymen make are the right to receive Personal Protection equipment and Health and Safety training, the right to receive compensation for accidents and sick days (which they do not have even with cases of death that have occurred this year), right to organize and unionize.

Glendy Tsitouras, organizer of the group of distributors, stressed that the abuses of the “delivery drivers” are not new, but said that the pandemic revealed them.

“They are only asking for what is fair for the work they do. They have been in charge of everything from day one, and most with the apps they don’t even have a salary, they don’t let them use the bathroom. They face many abuses and the least that the City and the State can do is recognize the value they have, not with words but with protections, ”added the activist.

Murad Awawdeh, Acting Co-Executive Director of the New York Immigration Coalition, assured that immigrants without documents bear the brunt of the delivery industry, and considered it very unfair that they are left behind, when they have been putting their hearts to the pandemic.

“As we enter the 10th month of the pandemic and a second peak of COVID-19, delivery workers continue to feed New Yorkers. But the vast majority of delivery workers have been left on the sidelines without any relief, simply because of their immigration status, ”the activist commented. “It was enough. New York must create an excluded workers fund so that we can provide financial relief to all New Yorkers affected by this pandemic. This is good for New York families, our economy and our collective public health. “

The president of the Municipal Council, Corey Johnson, added to the clamor of the workers and asked that their effort and sacrifice be honored in the midst of the pandemic.

“Delivery workers risk their lives every day when they bring food to our doors, and it is critical that we support and protect them. They are essential workers and play a vital role to keep this city moving while we fight COVID-19, ″ said the politician.

Consulted about the complaints and demands of the distributors, the Governor Cuomo’s Office He did not refer directly to them, and through the state Department of Labor (DOL), they issued a comment, where they assured that they were committed to not allowing exploitative practices against workers.

“The New York State Department of Labor works every day to protect New Yorkers at work and that mission has never been more important than during this public health emergency,” he said. Deanna Cohen, spokeswoman for the Department of Labor. “We continue to work to ensure that employers keep workers safe and follow appropriate regulations, along with the Department of Health and local partners.”

The DOL noted that the governor He has also called for additional protections for digital market workers in New York State as part of his 2020 state of the state agenda, and while the COVID crisis reversed that momentum last spring, Cuomo remains committed to those reforms.

Likewise, that agency mentioned that during the pandemic, New York workers have “been able to receive traditional state unemployment insurance or Pandemic Unemployment Assistance (PUA)”, benefits for which the majority of couriers, who are undocumented, do not qualify. , answer that according to distributors as Julio Monsalve, they prove that they are invisible to the state.

“The governor always talks about unemployment insurance, but it is obvious that they know that we do not receive a single dollar. These responses are doubly offensive and confirm that we do not exist, they only speak of those who have papers, but Many of us who are taking them to eat do not have papers and that is why we are raising our voices“, Concluded the young man.

The delivery men in figures