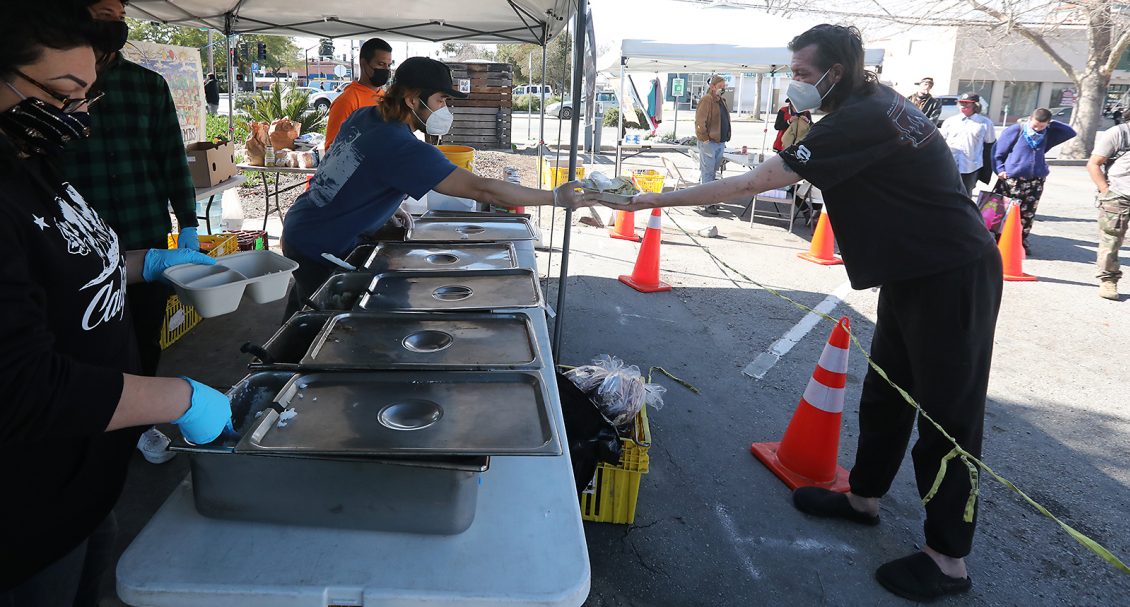 Santa Cruz, CA – An activist group on the brink of celebrating a consecutive year of coronavirus pandemic-era free meal service was summarily ejected from a private downtown parking lot Thursday.

Potentially setting the stage for the latest standoff with the City of Santa Cruz, organizer Keith McHenry then moved Food Not Bombs’ distribution effort into an adjacent “Lot 27” public parking area just across Front Street, the same one the group was locked out of last year due to what officials cited as “public nuisance” complaints.

“We’re like, just keep moving and doing what needs to happen,” McHenry said of consistently serving as many as 200 free vegan meals a day since Marcy 14.

Thursday’s lunch operation kicked off without obvious impact while nearby Izzel Izzenev, who had come to volunteer, looked on. Describing those gathered as “like a family,” Izzenev obtained a “gently used” large backpack from Food Not Bombs after recently having possessions stolen at San Lorenzo Park.

Though not the first time Food Not Bombs has been asked to relocate its home base during its decades in Santa Cruz, McHenry said he was caught unaware by this week’s directive to immediately relocate from “Lot 23” after a four-month stay without serious issues. McHenry recounted the interaction with property owner/developer Anton DevCo in an email shared with the Sentinel.

“The company developing the luxury condominiums at Laurel and Front streets would be meeting with the bank to compete escrow on a $100 million agreement tomorrow and the lot has to be cleared or they could fail to secure the money,” McHenry wrote Wednesday. “Their man at the meal was surprised to find us there sharing food and that there was a shipping container on site. He also told us that Anton DevCo owned the parking lot. That was surprising since the city demanded we move to the lot last fall.”

The Laurel Street lot is set to be part of a pending new six-story mixed residential-commercial development spread over seven parcels, with five existing structures razed in the effort. More than 200 apartments are planned for the project, sometimes referred to as the “Pacific-Front” development. Anton DevCo representatives did not respond to contact efforts made by the Sentinel on Thursday.

The city began leasing Lot 23 as a public parking area sometime after selling the 9,104-square-foot property for $1.2 million to Devcon Investments in May 2016, according to a January 2016 city Downtown Commission agenda report. According to Santa Cruz County Recorder’s Office records, the property was transferred from Devcon to Anton DevCo on Dec. 31. Per a clause in the city’s lease of the 24-space parking lot 23, the owner was required to give the city notice to terminate, which Smith said she did not believe had happened.

“City staff have been in touch with the developer and we’re eager to work with them. Had we known — gotten a 30-day notice to vacate or to terminate the contract — then we would have notified Keith (McHenry) and kind of gone through that process. But that didn’t happen, that’s OK. We’re happy to be flexible and nimble as we can.”

In addition to relocating the daily pop-up meal distribution effort, McHenry needed to reserve a moving truck Thursday to tow the group’s storage, housed in a large shipping container purchased through community donations in recent weeks, back to the group’s former home base on Lot 27. City of Santa Cruz officials ordered Food Not Bombs and homeless people living in tents in and around Lot 27 out in September, via an executive order signed by City Manager Martín Bernal. The city subsequently provided Food Not Bombs with a short-term permit to use Lot 23, a permit which has since expired, according to Santa Cruz spokeswoman Elizabeth Smith.

McHenry has consistently stated to the Sentinel that Food Not Bombs is exercising its right to free speech and does not obtain permits for its activities. He acknowledged having seen the city’s permit for use of Lot 23, however.

“I think the city will leave us alone because they knew we’re doing a really valuable service,” McHenry said Thursday of possible conflict over the relocation. “They never even bothered us about being there. (The permit) didn’t say anything specific about a shipping container.”

As opposed to the last time the group was in Lot 27, McHenry said mental health conditions have changed for many of those who had set up their tents around the meal sites the last time. He said he has seen some people initially struggling with emotional problems begin to improve their quality of life in the last few months of the pandemic. Prior to March, Food Not Bombs primarily confined its meal offerings to weekends outside the downtown post office.

Jessica A. York covers Santa Cruz government, water issues and homelessness for the Sentinel. She has been a working journalist, on both coasts, since 2004.