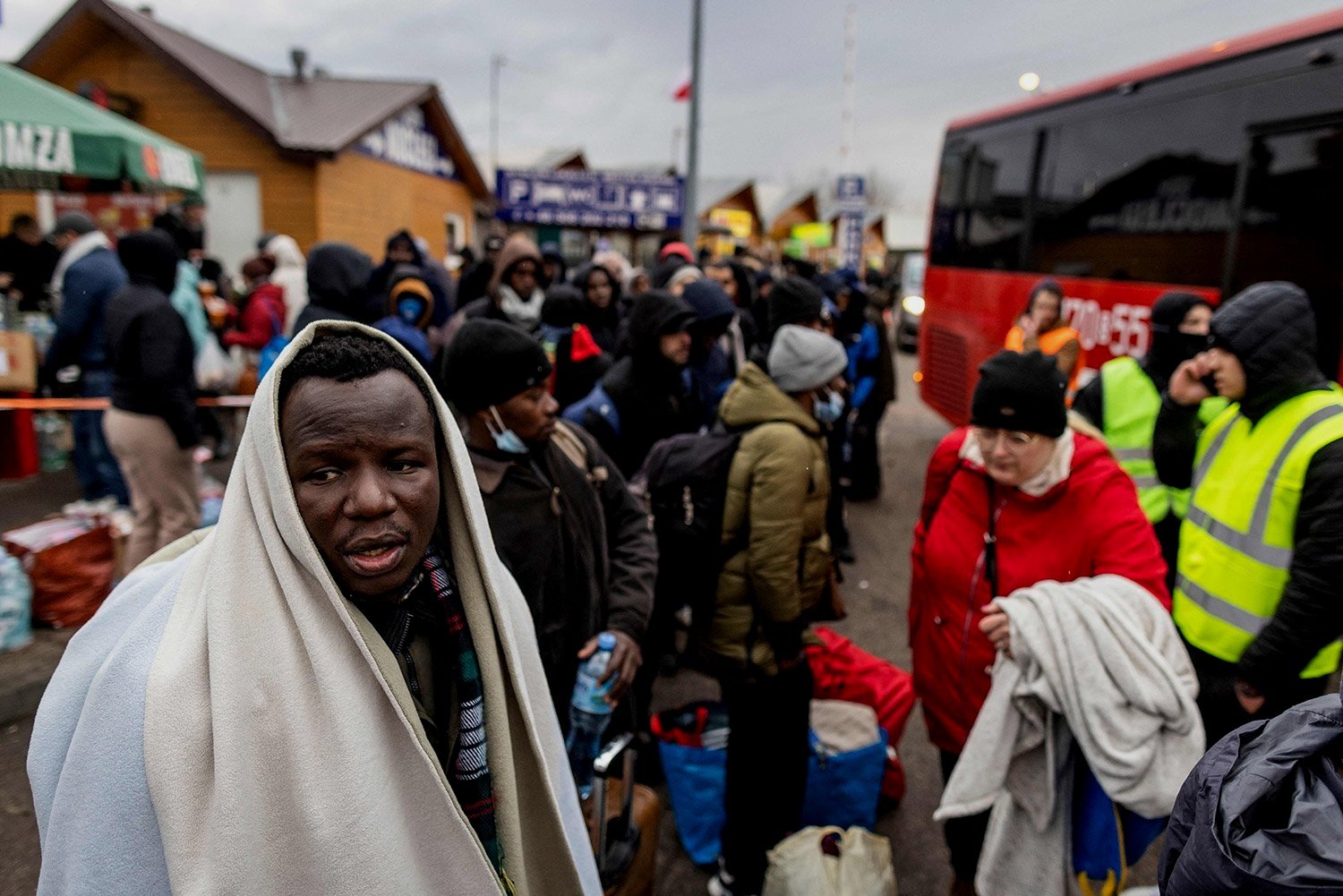 For African And Colonized Peoples, To Understand Ukraine: De-Center Europe And Focus On Imperialism

Above Photo: African students trying to get out of Ukraine have faced racism at the border. They’ve been prevented from getting on buses being told that Ukrainians come first. Wojtek Radwanski/AFP/Getty.

Black Alliance for Peace Statement on the Situation in the Ukraine.

The Black Alliance for Peace emphatically declares that the conflict in the Ukraine emerges from the ceaseless and single-minded drive of the U.S., NATO, and the European Union for global economic and political dominance. The genesis of the current crisis, as BAP has previously asserted, is in the 2014 US-backed coup of Ukraine’s democratically elected government – and in the determination of the U.S./EU/NATO “axis of domination” to convert Ukraine into a heavily-militarized NATO member nation, lurking on the border of the Russian Federation. NATO’s expansion has been a well-known security concern for Russia since 1999, when Bill Clinton inaugurated the official process of growing NATO’s membership to include former nations of the Warsaw Pact. Today, as the conflict escalates, NATO’s expansion has become an existential threat to African people and all oppressed and colonized people around the world. For peace to arrive in the region and in the world, the expansion of this “axis of domination” must be halted and NATO must be dismantled.

But what is peace? For BAP, peace is not merely the absence of conflict. Peace means the achievement, through popular struggle and self-defense, of a world liberated from militarism and nuclear proliferation, imperialism and unjust war, patriarchy, and white supremacy. Indeed, the resurgence and celebration of Nazism in the Ukraine, as well as in the United States, Canada, and elsewhere, represents a global consolidation of white supremacy as part of the project of imperialism. This consolidation also appears through invocations of and appeals to white, “civilized” nations and peoples and the entrenchment of an unabashedly racist pan-European world. Peace also means dismantling a military-industrial complex that is clearly profiting from endless war and intervention and reinvesting bloated “defense” budgets into education, health and child care, housing, and the battle against global warming. We need to dismantle NATO for the same reasons we need to abolish the police: both serve the interests of capital and empire at the expense of the global working classes.

The Black Alliance for Peace is mindful of the loss of life in Ukraine, but also in Somalia, Yemen, and every nation suffering under NATO wars of domination. We offer our unwavering solidarity with the people of these places. As BAP Coordinating Committee member Rafiki Morris  argues:

“Our concern for the people of Ukraine must be added to our overarching concern for those in Iraq, Afghanistan, Syria, Yemen, Libya; coups in Egypt, Honduras, Ukraine, Bolivia, Brazil;  subversion in Venezuela, Nicaragua, Cuba; coups across the African continent with soldiers trained by AFRICOM.”

We note, for example, that as the U.S. condemned the military actions of the Russian Federation in Ukraine, its armed drones bombed Somalia. Moreover, as Black immigrants from Africa and the Caribbean were abandoned and mistreated in the Ukraine, the 200th deportation flight of the Biden administration sent 129 Haitians to Port-au-Prince, adding to the 21,000 already deported in one year.

To secure the interests of the Russian and Ukrainian people, there must be good faith negotiations between the Russian Federation, representatives of the peoples of Donbas, and the U.S.  The EU and the U.S. must end their continuous shipments of arms and other “lethal aid” to Ukraine. Ukraine and Russia must enter into serious discussions with the peoples of the Donbas in order to determine if the Minsk agreement, which was  unanimously approved by the United Nations Security Council in 2015, is still applicable.  And NATO must be disbanded.

A cloud of confusion has settled on many people, as the lusty calls for war with Russia grow louder and the propagandistic appeals to patriotism, racial nationalism, and the defense of “white civilization” intensify. For BAP, there is no confusion. The conflict in the Ukraine has only exposed the hypocrisy and contradictions of imperialism, war, and militarism – and the demand for peace means to fight against U.S. imperialism and the U.S./EU/NATO axis of domination.

On this strategic focus, BAP says once again that there will be No Compromise and No Retreat!