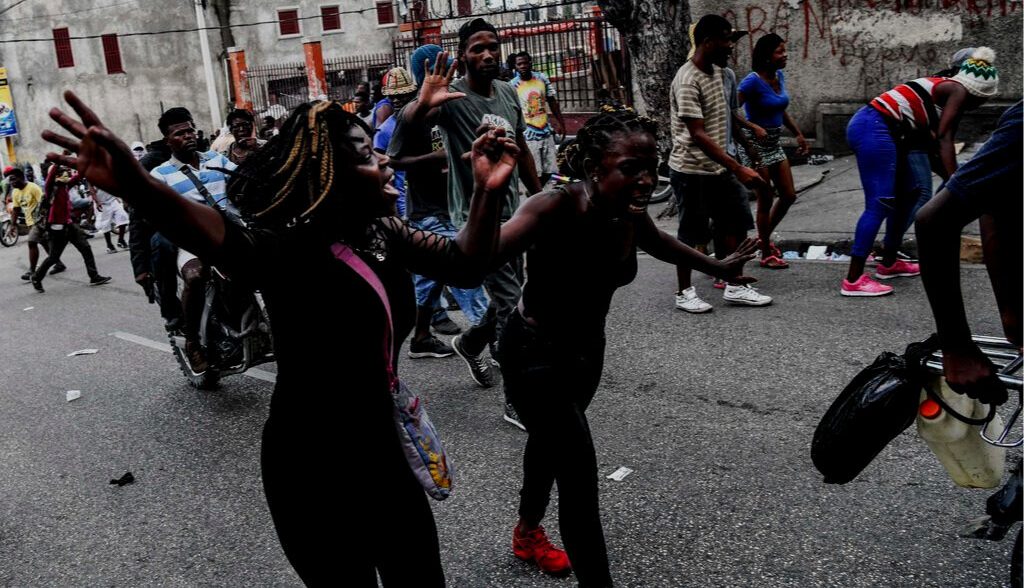 NOTE: Haiti Action Network has an action page of resources that you can use to press for the United States to end its intervention in Haiti. Click here for that page.

A Black Alliance for Peace Statement on Haiti.

The people of Haiti have been demanding freedom from the succession of U.S.-imposed dictators for decades. One such dictator, Jovenel Moïse, refused to leave office February 7, which marked the end of his term five years after an illegal election. This move catapulted yet another intense episode in the historic struggle of the Haitian masses against colonial intervention. Tens of thousands of Haitians went to the streets demanding democracy and an end to dictatorship. And what was the response from the U.S. puppet regime? Bullets, paramilitary terror, curfews, house raids, beatings and the imprisonment of opposition leaders.

With the election of U.S. President Joe Biden, folks believed this so-called “champion” of fair elections and the rule of law—who had expressed a commitment that “Black Lives Matter”—would rally to the side of Haitians and end U.S. support for the dictatorship.

But that did not happen.

When Moïse announced he would stay in office past February 7, and continue to rule by decree, the Biden administration signaled it supported that decision. Moïse’s rule by decree was made possible because elections were postponed in 2019, which allowed the mandates of most of the representatives to the National Assembly—Haiti’s parliament—to expire.

It did not matter that Moïse ruled by decree, that he violated the rights of his people and that the majority of the people wanted him gone. What mattered to the Biden administration was the purpose Moïse served in U.S. plans for the Caribbean and Latin American region.

In other words, the people must be sacrificed for the larger interests of the U.S. imperial project. These interests that could not be bothered with the trifle concerns about democracy, legitimacy or the rights of the people. Those rhetorical terms are only evoked as expressions of the United States’ so-called “values” when directed at an adversary like Russia, Venezuela, China or any other country the United States is actively attempting to destabilize. But those values cannot be allowed to complicate U.S. interests in Haiti or even in the occupied Black and Brown communities within the United States.

We ask Joe Biden and his supporters, who claim Biden cares about African/Black people: Why does it seem like the lives of African/Black people in Haiti do not matter? Is it that Black lives only matter when they are supporting U.S. and European colonial white power?

In the Black Alliance for Peace (BAP), we know the answer to that rhetorical question. Both parties and the U.S. state have demonstrated the lives of non-Europeans mean extraordinarily little. And the values that the United States and Western Europeans pretend to uphold—like democracy and human rights—are dead letters when it comes to the fundamental human rights of the peoples of the global South.

The United States and the United Nations armed and trained Haitian police. Moïse has the full support of these armed paramilitary forces, who are committed to upholding the rule of the Haitian ruling class that serves international capital. That is why the Biden administration supports Moïse. Therefore, Moïse has no legitimacy.

Haiti emerged as a free society in the greatest revolution in human history in 1804, when the people of Haiti established the first Black Republic after fighting and defeating first the Spanish and then the French, at the time the greatest military power on the planet. Since then, the West has tried to destroy Haiti.

Invasions, occupations, death squads, economic plunder, attacks on their culture, political isolation and U.S.-backed dictatorships have exacted a severe price on the people of Haiti. Yet, they have never surrendered. That spirit of resistance is on display today in the streets of Haiti.

We, in the Black Alliance for Peace, will continue to support those efforts by organizing actions throughout the United States in solidarity with the Haitian people.

We are not confused. There is nothing exceptional about the United States, except perhaps its hypocrisy. Declarations made by white-supremacist politicians and heads of imperialist corporations that “Black Lives Matter” have rung hollow, opportunistic and completely in contradiction to the lived experiences of African/Black people in the United States from 1619 to the present.

Stripped of the veneer of liberal-rights discourse, the true core values of the U.S. settler-colonial project are obvious: Glorification of violence, white supremacy, patriarchy, social Darwinism, materialism and extreme individualism. These core values facilitated the land theft that allowed for the creation of the United States, enslavement and the most rapacious forms of capitalist accumulation on the planet.

The abandonment of the people of Haiti affirms once again the United States is committed to white power. Subversion, war and brutal sanctions are just some of the instruments employed to maintain the structures of white colonial-capitalist power.

So, our appeal is not to the conscience of Biden and the neoliberal imperialist Democrats—they only have objective interests. Instead, we call on the people of the United States to demand an alteration both in U.S. policies regarding Haiti and in its relationship with Haiti as well as with all nations that currently find themselves in the crosshairs of U.S. imperialist reaction.

However, we understand our commitment to peace and People(s)-Centered Human Rights, social justice, democracy and self-determination cannot be realized without an organized people who are struggling for power.

The people of Haiti are fighting for power, for the ability to determine their own destiny. Stand with them. Stand with us. Fight for freedom and for a new reality in Haiti and the world.

No Compromise, No Retreat!