For First Time In 70 years, Palestinians Return To Their Villages

Above: Palestinian refugees forced to flee their homes in 1948.

To commemorate Land Day, group of Palestinian refugees returned to the villages they were expelled from in 1948.

Nilin, Occupied West Bank – In a rush, Hawwa al-Khawaja and her daughter Khawla stepped off a bus as it pulled over at the entrance of what was once the village they called home.

The elder Khawaja stood there greeting others who had arrived on the buses that followed, just as she used to greet her village’s visitors as a young woman before 1948.

“Welcome, welcome to al-Thahiryeh,” the 90-year-old said. “We apologise for not having a home to welcome you in.”

Since 1948, there have been no homes or residents in the destroyed village of al-Thahiryeh, which lies southeast of the city of al-Lydd.

That year, Zionist forces pushed out Palestinian families living in the village, before destroying every inch of it.

Al-Thahiryeh was one of 500 villages that faced the same fate in what became known as the ethnic cleansing of at least 800,000 Palestinians.

On Wednesday, Hawwa al-Khawaja returned to al-Thahiryeh for the first time, but only for a few hours. 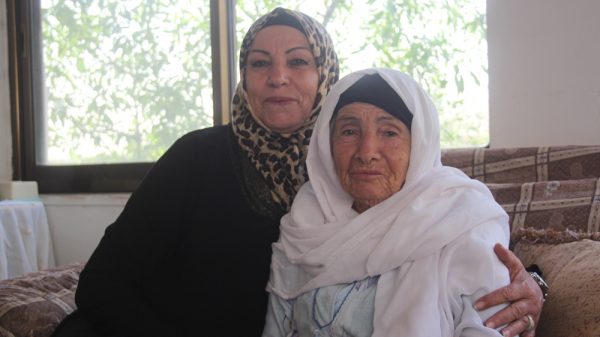 As part of an initiative launched by Filastiniyat, a Palestinian non-governmental organisation, a group of elderly refugees from the occupied West Bank and from inside the territories occupied by Israel in 1948 were given a chance to fulfil their dreams of returning to their destroyed villages surrounding al-Lydd.

The journey was planned to coincide with Land Day, which marks the day when, on March 30, 1976, Israel ordered the confiscation of massive tracts of land belonging to Palestinian citizens of Israel.

In the demonstrations that followed, Israeli forces shot and killed six Palestinians.

The event is viewed as a continuation of the campaign of ethnic cleansing that Israel has carried out against Palestinians since 1948 until this day.

When Hawwa and the group of refugees tried to cross the first Israeli military checkpoint to get to al-Thahiryeh, Israeli soldiers refused to let them go through.

They headed to another checkpoint northwest of Ramallah where they were questioned and inspected for hours before they were allowed to pass.

Wearing her new traditional Palestinian dress gifted to her by her son on Mother’s Day [celebrated by the Arab world on March 21], she says she almost lost hope of ever reaching her village.

But the group managed to pass and head to the towns they grew up in.

The only proof Hawwa found of her home ever being in al-Thahiryeh was one big tree.

The group could not contain their tears while listening to Hawwa welcoming them to the empty land. They gathered around her and her daughter Khawla, curious to hear more about the village’s history.

Hawwa is a mother of three children, and a grandmother of 17. For a few moments, she recalled how she was a young, slender woman, living in al-Thahiryeh.

She shuffled from one place to the next, talking about how al-Thahiryeh was once a pitstop for all commercial trucks heading to al-Lydd. That is what gave the village its reputable name – it was known for its economic prosperity and rich agricultural land.

Hawwa explained that when the clashes between Palestinians and Zionist militias edged closer and closer to al-Thahiryeh in 1948, the family decided to head to al-Lydd, where they spent 10 days before they had to pack their bags again.

“We only took a few utensils to use for food preparation, we didn’t take many clothes, and we left our jewellery back at our home. We thought we would be back in a few days,” Hawwa told Al Jazeera.

She was holding her infant son Hassan in her hands when the sounds of explosions and gunfire erupted in the city of al-Lydd on July 10, 1948.

Screams, fear and panic reverberated through the streets as Zionist forces attacked al-Lydd, massacring some 170 people in the town’s mosque.

Hawwa and her family escaped to the nearby village of al-Midya, and spent years on the move as the fighting spilled over from one area to the next.

They finally ended up in the village of Nilin, west of Ramallah in the occupied West Bank, where she currently resides.

“Al-Thahiryeh was a paradise,” she says.

“We had everything there – we were happy and comfortable and blessed beyond words. We lost everything when we lost al-Thahiryeh.”

=Hawwa, who likes to point out that she is older than the state of Israel, still keeps a collection of keys and documents that prove her family’s ownership of land in al-Thahiryeh and al-Lydd.

Describing how it felt to return, Hawwa said she had “mixed feelings of pain and happiness”.

“It was like the village was ours again, even if only for a few hours,” she said.

Her daughter, Khawla, who was born several years after the Nakba, brought back a bottle of sand and a few stones from the village.

“It’s a memory that I’ll live to return back to,” she told Al Jazeera.

‘I remember it as though it happened yesterday’

Amena Sanqar, one of the elderly women who joined the group, visited her village of Beit Nabala, which she left at the age of 17 eight decades ago.

The journey and long hours of inspection at Israeli checkpoints had exhausted Amena, but the minute she was in Beit Nabala, she said that life ran through her veins again.

Sanqar, a mother of eight children and a grandmother of 41, said she remembers the day her family left their village due to the war.

“My father was holding my hand, while my mother walked in front of us, holding bags over her head,” she recalled.

“The trees are destroyed, and there is no one to care for them … the sight broke my heart,” she said.

“We and the families of the village continued to walk as fast as we could away from the gunfire until we reached the village of Qibya,” continues Sanqar, describing the day they left her village to escape the fighting.

“I still remember it as though it happened yesterday.”

Nakba: ‘It remains bitter and continues to burn’