For Media, Driving Into A Crowd Of Protesters Is A ‘Clash’

The Washington Post, Boston Globe, AOL News, The Hill, BBCand Sky News UK all chose to frame the ramming of a car into anti-fascist protesters as “clashes.”

The BBC’s breaking news tweet, “One dead amid clashes between US white nationalists and counter-protesters in Charlottesville,” is an extremely odd way to describe a person driving a car into a crowd of anti-fascist protesters—as was AOL’s “1 Dead, 34 Injured in Clashes at Virginia Rally.”

The term “clashes”—as FAIR (10/14/15) has noted before—is a term designed to obscure blame,  presenting a picture of two equal sides engaging in violent activities. Reading “one dead” after “clashes” at a white nationalist rally gives us no idea who died, or who did the killing.

(Alternatively, one can veil responsibility by attributing agency to an inanimate object and disembodied emotions, as with the New York Times‘ headline, “Car Plows Into Crowd as Racial Tensions Boil Over in Virginia.”) 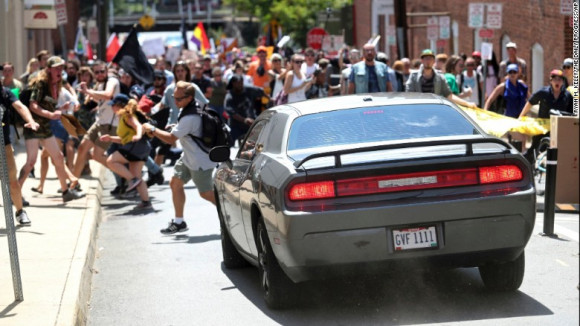 Most of these articles would mention in the text (or later change the headline after social media backlash) to make it clear it was the anti-fascist protesters who were mowed down, but the initial instinct to obscure who did what to whom speaks to the pathological fear of placing blame on the far right.