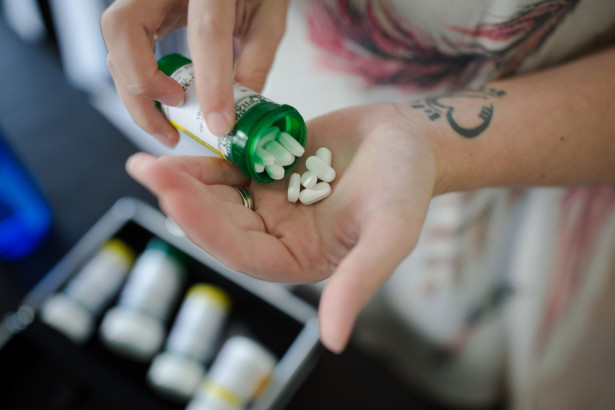 Above Photo: Alisa Erkes, who has Behcet’s disease, now takes extended-release morphine and hydrocodone after her insurance company stopped covering the painkilling skin patch Butrans that had been effective for her chronic pain. (Kevin D. Liles for The New York Times)

Drug companies and doctors have been accused of fueling the opioid crisis, but some question whether insurers have played a role, too.

This story was co-published with The New York Times.

At a time when the United States is in the grip of an opioid epidemic, many insurers are limiting access to pain medications that carry a lower risk of addiction or dependence, even as they provide comparatively easy access to generic opioid medications.

Drugmakers, pharmaceutical distributors, pharmacies and doctors have come under intense scrutiny in recent years, but the role that insurers — and the pharmacy benefit managers that run their drug plans — have played in the opioid crisis has received less attention. That may be changing, however. The New York state attorney general’s office sent letters last week to the three largest pharmacy benefit managers — CVS Caremark, Express Scripts and OptumRx — asking how they were addressing the crisis.

ProPublica and The New York Times analyzed Medicare prescription drug plans covering 35.7 million people in the second quarter of this year. Only one-third of the people covered, for example, had any access to Butrans, a painkilling skin patch that contains a less-risky opioid, buprenorphine. And every drug plan that covered lidocaine patches, which are not addictive but cost more than other generic pain drugs, required that patients get prior approval for them.

In contrast, almost every plan covered common opioids and very few required any prior approval.

The insurers have also erected more hurdles to approving addiction treatments than for the addictive substances themselves, the analysis found.

Alisa Erkes lives with stabbing pain in her abdomen that, for more than two years, was made tolerable by Butrans. But in January, her insurer, UnitedHealthcare, stopped covering the drug, which had cost the company $342 for a four-week supply. After unsuccessfully appealing the denial, Erkes and her doctor scrambled to find a replacement that would quiet her excruciating stomach pains. They eventually settled on long-acting morphine, a cheaper opioid that UnitedHealthcare covered with no questions asked. It costs her and her insurer a total of $29 for a month’s supply.

The Drug Enforcement Administration places morphine in a higher category than Butrans for risk of abuse and dependence. Addiction experts say that buprenorphine also carries a lower risk of overdose.

UnitedHealthcare, the nation’s largest health insurer, places morphine on its lowest-cost drug coverage tier with no prior permission required, while in many cases excluding Butrans. And it places Lyrica, a non-opioid, brand-name drug that treats nerve pain, on its most expensive tier, requiring patients to try other drugs first.

Erkes, who is 28 and lives in Smyrna, Georgia, is afraid of becoming addicted and has asked her husband to keep a close watch on her. “Because my Butrans was denied, I have had to jump into addictive drugs,” she said.

UnitedHealthcare said Erkes had not exhausted her appeals, including the right to ask a third party to review her case. It said in a statement, “We will work with her physician to find the best option for her current health status.”

Matthew N. Wiggin, a spokesman for UnitedHealthcare, said that the company was trying to reduce long-term use of opioids. “All opioids are addictive, which is why we work with care providers and members to promote non-opioid treatment options for people suffering from chronic pain,” he said.

Dr. Thomas R. Frieden, who led the Centers for Disease Control and Prevention under President Obama, said that insurance companies, with few exceptions, had “not done what they need to do to address” the opioid epidemic. Right now, he noted, it is easier for most patients to get opioids than treatment for addiction.

Leo Beletsky, an associate professor of law and health sciences at Northeastern University, went further, calling the insurance system “one of the major causes of the crisis” because doctors are given incentives to use less expensive treatments that provide fast relief.

The Department of Health and Human Services is studying whether insurance companies make opioids more accessible than other pain treatments. An early analysis suggests that they are placing fewer restrictions on opioids than on less addictive, non-opioid medications and non-drug treatments like physical therapy, said Christopher M. Jones, a senior policy official at the department.

Insurers say they have been addressing the issue on many fronts, including monitoring patients’ opioid prescriptions, as well as doctors’ prescribing patterns. “We have a very comprehensive approach toward identifying in advance who might be getting into trouble, and who may be on that trajectory toward becoming dependent on opioids,” said Dr. Mark Friedlander, the chief medical officer of Aetna Behavioral Health who participates on its opioid task force.

Aetna and other insurers say they have seen marked declines in monthly opioid prescriptions in the past year or so. At least two large pharmacy benefit managers announced this year that they would limit coverage of new prescriptions for pain pills to a seven- or 10-day supply. And bowing to public pressure — not to mention government investigations — several insurers have removed barriers that had made it difficult to get coverage for drugs that treat addiction, like Suboxone.

Experts in addiction note that the opioid epidemic has been changing and that the problem now appears to be rooted more in the illicit trade of heroin and fentanyl. But the potential for addiction to prescribed opioids is real: 20 percent of patients who receive an initial 10-day prescription for opioids will still be using the drugs after a year, according to a study by researchers at the University of Arkansas for Medical Sciences.

Several patients said in interviews that they were terrified of becoming dependent on opioid medications and were unwilling to take them, despite their pain.

In 2009, Amanda Jantzi weaned herself off opioids by switching to the more expensive Lyrica to treat the pain associated with interstitial cystitis, a chronic bladder condition.

But earlier this year, Jantzi, who is 33 and lives in Virginia, switched jobs and got a new insurer — Anthem — which said it would not cover Lyrica because there was not sufficient evidence to prove that it worked for interstitial cystitis. Jantzi’s appeal was denied. She cannot afford the roughly $520 monthly retail price of Lyrica, she said, so she takes generic gabapentin, a related, cheaper drug. She said it does not manage the pain as well as Lyrica, which she took for eight years. “It’s infuriating,” she said.

Jantzi said she wanted to avoid returning to opioids. However, “I could see other people, faced with a similar situation, saying, ‘I can’t live like this, I’m going to need to go back to painkillers,’” she said.

In a statement, Anthem said that its members have to meet certain requirements before it will pay for Lyrica. Members can apply for an exception, the insurer said. Jantzi said she did just that and was turned down.

With Butrans, the drug that Erkes was denied, several insurers either do not cover it, require a high out-of-pocket payment, or will pay for it only after a patient has tried other opioids and failed to get relief.

In one case, OptumRx, which is owned by UnitedHealth Group, suggested that a member taking Butrans consider switching to a “lower cost alternative,” such as OxyContin or extended-release morphine, according to a letter provided by the member.

Wiggin, the UnitedHealthcare spokesman, said the company’s rules and preferred drug list “are designed to ensure members have access to drugs they need for acute situations, such as post-surgical care or serious injury, or ongoing cancer treatment and end of life care,” as well as for long-term use after alternatives are tried.

Butrans is sold by Purdue Pharma, which has been accused of fueling the opioid epidemic through its aggressive marketing of OxyContin. Butrans is meant for patients for whom other medications, like immediate-release opioids or anti-inflammatory pain drugs, have failed to work, and some scientific analyses say there is not enough evidence to show it works better than other drugs for pain.

Dr. Andrew Kolodny is a critic of widespread opioid prescribing and a co-director of opioid policy research at the Heller School for Social Policy and Management at Brandeis University. Kolodny said he was no fan of Butrans because he did not believe it was effective for chronic pain, but he objected to insurers suggesting that patients instead take a “cheaper, more dangerous opioid.”

Erkes’s pain specialist, Dr. Jordan Tate, said her patient had been stable on the Butrans patch until January, when UnitedHealthcare stopped covering the product and denied Erkes’s appeal.

Without Butrans, Erkes, who once visited the doctor every two months, was now in Tate’s office much more frequently, and once went to the emergency room because she could not control her pain, thought to be related to an autoimmune disorder, Behcet’s disease.

Tate said she and Erkes reluctantly settled on extended-release morphine, a drug that UnitedHealthcare approved without any prior authorization, even though morphine is considered more addictive than the Butrans patch. She also takes hydrocodone when the pain spikes and Lyrica, which UnitedHealthcare approved after requiring a prior authorization.

Erkes acknowledged that she could have continued with further appeals, but said the process exhausted her and she eventually gave up.

While Tate said Erkes had not shown signs of abusing painkillers, her situation was far from ideal. “She’s in her 20s and she’s on extended-release morphine — it’s just not the pretty story that it was six months ago.”

Many experts who study opioid abuse say they also are concerned about insurers’ limits on addiction treatments. Some state Medicaid programs for the poor, which pay for a large share of addiction treatments, continue to require advance approval before Suboxone can be prescribed or they place time limits on its use, both of which interfere with treatment, said Lindsey Vuolo, associate director of health law and policy at the National Center on Addiction and Substance Abuse. Drugs like Suboxone, or its generic equivalent, are used to wean people off opioids but can also be misused.

The analysis by ProPublica and the Times found that restrictions remain prevalent in Medicare plans, as well. Drug plans covering 33.6 million people include Suboxone, but two-thirds require prior authorization. Even when such requirements do not exist, the out-of-pocket costs of the drugs are often unaffordable, a number of pharmacists and doctors said.

At Dr. Shawn Ryan’s addiction-treatment practice in Cincinnati, called BrightView, staff members often take patients to the pharmacy to fill their prescriptions for addiction medications and then watch them take their first dose. Research has shown that such oversight improves the odds of success. But when it takes hours to gain approval, some patients leave, said Ryan, who is also president of the Ohio Society of Addiction Medicine.