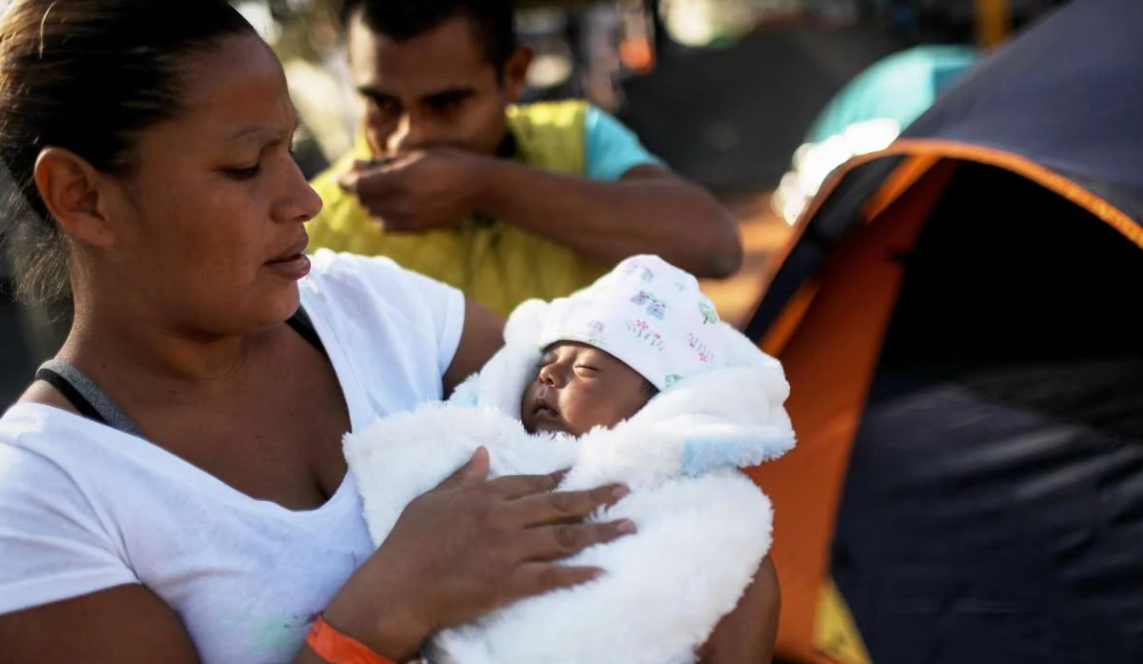 Forced Sterilization Is Nothing New To Criminalized People In The US

Above photo: A Honduran mother Linda holds her 1-month-old daughter Juana, who was born at a temporary shelter set up in Tabasco, Mexico, during the migrant caravan to the U.S.Mario Tama / Getty Images.

The United States has long used citizenship status and perceived criminality as a means to determine whether individuals deserve basic human rights. This week’s egregious allegations of mass hysterectomies at an immigrant jail in Georgia are consistent with the long U.S. tradition of state-sanctioned eugenics, medical abuse and forced sterilizations against those whose humanity the state does not recognize or value.

News reports on Monday revealed that gynecologists in an immigrant jail in Georgia have performed high rates of hysterectomies, often without the full awareness of the immigrant women themselves.

According to a complaint filed by Project South, the revelation came from a whistleblower named Dawn Wooten, a Black woman who was a nurse at Georgia’s Irwin County Detention Center. In the detailed account, Wooten shares not only the pervasive accounts of medical neglect and oversight, but also the ways that immigrant women’s bodies have been infiltrated by the state.

In the report, Wooten explains that incarcerated people would be sent to the doctor for medical procedures, including hysterectomies, and “they don’t know why they went or why they’re going.” Often, these women were not given informed consent as the medical procedures were not explained in their native language. At times, these women experienced intimidation and yelling from nurses pressuring them to follow through with unwanted or unnecessary procedures. In one account, a migrant woman simply came to the conclusion “that something was not right” when incarcerated migrants were being coerced into procedures that weren’t clearly explained or consistently described by medical staff.

These disturbing reports from Georgia are not surprising within the larger context of human rights abuses in the U.S. Since 2016, the conditions facing migrant people interned by the U.S. Immigration and Customs Enforcement (ICE) have been a constant source of unrest and public upheaval. The images often depict dilapidated cells, makeshift bedding, and a lack of basic amenities like clean water and food for people jailed by ICE. While the treatment of migrant people on the border and the disregard for the lives and experiences of incarcerated people in this country has long been an issue, this moment has forced the public to grapple with the disparities in justice and liberty in new and disconcerting ways.

The reported resurgence of forced sterilizations at Georgia’s Irwin County Detention Center — a form of violence rooted in white supremacy, xenophobia, patriarchy and the inherently racist tenets of American citizenship — are an unfortunate recurrence in this nation’s short history. In times of contestation, sexual violence and reproductive injustice frequently become the currency of the state.

A History of Anti-Blackness in Western Medicine

Many people are colloquially familiar with the story of the Tuskegee Experiments on Black men which began in 1932. It was officially called “Tuskegee Study of Untreated Syphilis in the Negro Male.” What many people don’t know is that these experiments lasted approximately 40 years even though they were projected for only six months of experimentation. The study originally included roughly 600 Black men mainly from Macon County, Alabama, 201 of whom did not actually have syphilis. The study deceptively enrolled Black men without allowing them informed consent, as researchers told participants that they had “bad blood” and many were never treated at all.

The United States Public Health Service made the decision not to treat poor Black men for syphilis, but rather to watch them “until they died and their bodies examined for ravages of the disease,” according to The Washington Post.

The “study” officially ended in 1972 and has been linked to lower life expectancy among Black men over 45 and a deep distrust between Black communities and Western medicine. The emotional and mental effects of this study remain hidden from popular culture and mainstream news, leaving many Black communities to struggle against these sorts of medical disparities in relative isolation.

Eugenics is often associated with Nazi Germany but, in the early 20th century, the United States adopted these techniques in grand fashion. Our disgusting history with forced sterilizations is linked to a 1927 court decision in Buck v. Bell. The decision gave institutions like prisons and mental facilities the ability to sterilize any person in their custody for any reason deemed necessary to protect the “better interests” of society. Carrie Buck was determined to be “feebleminded” so the state took away her ability to reproduce children. This stemmed decades of state institutions using their authority to forcibly sterilize incarcerated people. It’s estimated that some 70,000 people were sterilized until the 1970s.

But, Buck v. Bell has never been overturned. As late as 2006 to 2010, California prisons have been found to have enforced the coerced sterilizations on at least 150 incarcerated people, according to PBS. As recently as 2017, a judge in central Tennessee offered shorter jail times to incarcerated people if they consented to sterilization. These procedures are used by prison administrators to disproportionately target and harm Black and Brown women, deeming them unfit for reproduction and marking their wombs as sites of waste and decay.

Holding Our History of Hating “Criminals”

The United States’s commitment to eugenics, medical abuse and forced sterilizations depicts the complex nature of perceived criminality in this country. By marking certain people’s bodies as inherently evil, anti-patriotic and outside of the community of citizenship, the state casts a veil over the grave human rights infringements and institutional abuses it enacts against nonwhite, non-wealthy, non-male, non-normative people. This is by design, not by happenstance.

In her 1994 essay, “Not Just (Any) Body Can Be a Citizen,” M. Jacqui Alexander wrote, “criminalization functions as a technology of control, and much like other technologies of control becomes an important site for the production and reproduction of state power.”

Criminalization is the mechanism by which people are transposed from humans into bodies through the eyes of the state. By criminalizing, ostracizing and excluding Black, Brown, queer, trans, immigrant and disabled people, the state sanctions all manner of macabre violence against those they see as merely bodies, organs, and a collection of pieces and parts.

The state is not invested in the humanity of all people but only in the humanity of a chosen few. Until we recognize and hold that truth to be self-evident, we will be powerless in holding these institutions and systems accountable for the injustices they continue to commit right in front of our faces.

Jenn M. Jackson (they/them) is a queer androgynous Black woman, an abolitionist, a lover of all Black people and an assistant professor at Syracuse University in the Department of Political Science. They are a native of Oakland, California, and will always represent their city. Follow Jenn on Twitter: @JennMJacksonPhD.