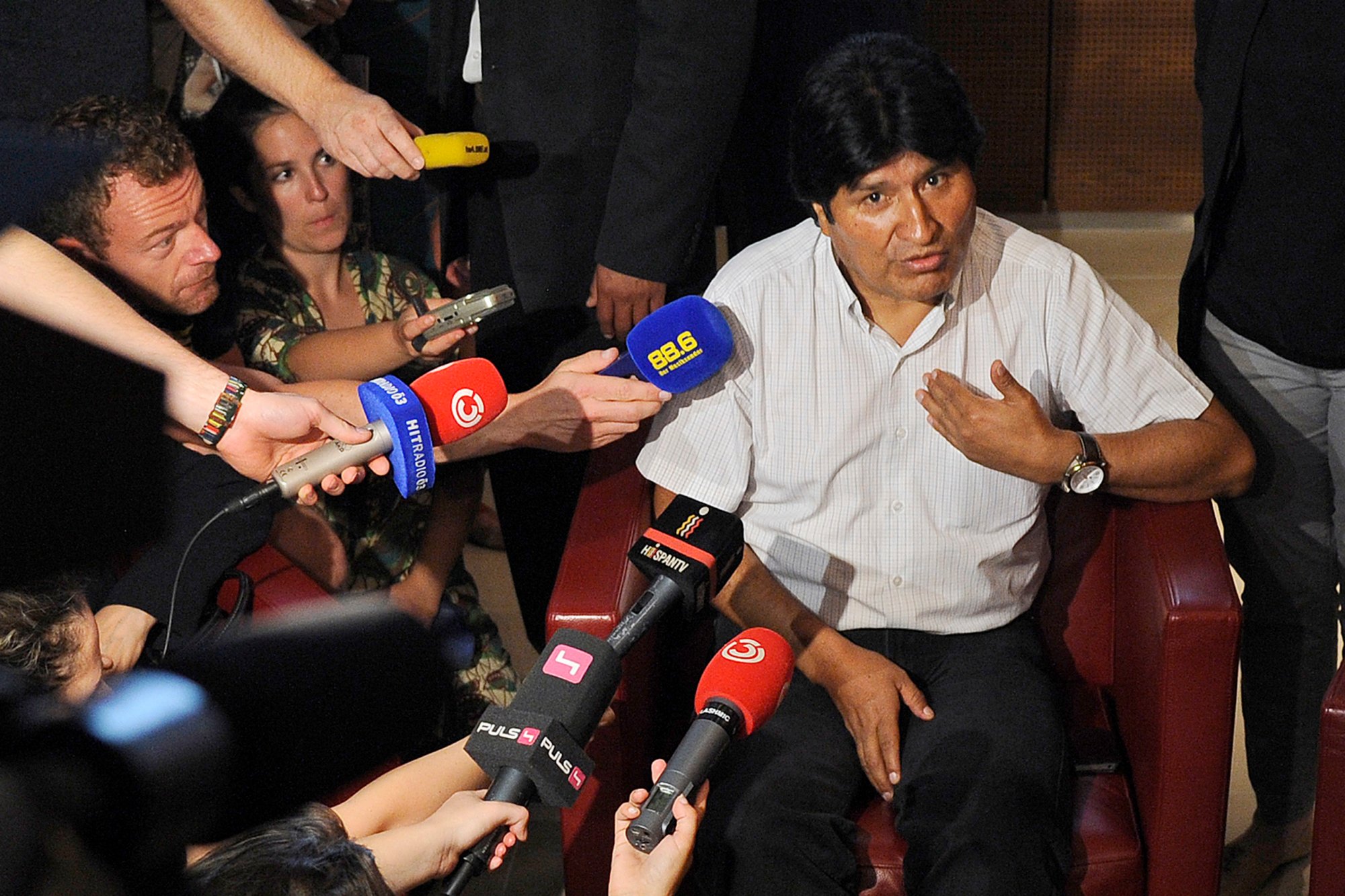 Above: President Evo Morales in Austrian airport talking to the media

Imagine the aircraft of the president of France being forced down in Latin America on “suspicion” that it was carrying a political refugee to safety – and not just any refugee but someone who has provided the people of the world with proof of criminal activity on an epic scale.

Imagine the response from Paris, let alone the “international community”, as the governments of the west call themselves. To a chorus of baying indignation from Whitehall to Washington, Brussels to Madrid, heroic special forces would be dispatched to rescue their leader and, as sport, smash up the source of such flagrant international gangsterism. Editorials would cheer them on, perhaps reminding readers that this kind of piracy was exhibited by the German Reich in the 1930s.

The forcing down of Bolivian President Evo Morales’s plane – denied airspace by France, Spain and Portugal, followed by his 14-hour confinement while Austrian officials demanded to “inspect” his aircraft for the “fugitive” Edward Snowden – was an act of air piracy and state terrorism. It was a metaphor for the gangsterism that now rules the world and the cowardice and hypocrisy of bystanders who dare not speak its name.

In Moscow, Morales had been asked about Snowden – who remains trapped in the city’s airport. “If there were a request [for political asylum],” he said, “of course, we would be willing to debate and consider the idea.” That was clearly enough provocation for the Godfather. “We have been in touch with a range of countries that had a chance of having Snowden land or travel through their country,” said a US state department official.

The French – having squealed about Washington spying on their every move, as revealed by Snowden – were first off the mark, followed by the Portuguese. The Spanish then did their bit by enforcing a flight ban of their airspace, giving the Godfather’s Viennese hirelings enough time to find out if Snowden was indeed invoking article 14 of the Universal Declaration of Human Rights, which states: “Everyone has the right to seek and to enjoy in other countries asylum from persecution.”

Those paid to keep the record straight have played their part with a cat-and-mouse media game that reinforces the Godfather’s lie that this heroic young man is running from a system of justice, rather than preordained, vindictive incarceration that amounts to torture – askBradley Manning and the living ghosts in Guantánamo.

Historians seem to agree that the rise of fascism in Europe might have been averted had the liberal or left political class understood the true nature of its enemy. The parallels today are very different, but the Damocles sword over Snowden, like the casual abduction of Bolivia’s president, ought to stir us into recognising the true nature of the enemy.

Snowden’s revelations are not merely about privacy, or civil liberty, or even mass spying. They are about the unmentionable: that the democratic facades of the US now barely conceal a systematic gangsterism historically identified with, if not necessarily the same as, fascism. On Tuesday, a US drone killed 16 people in North Waziristan, “where many of the world’s most dangerous militants live”, said the few paragraphs I read. That by far the world’s most dangerous militants had hurled the drones was not a consideration. President Obama personally sends them every Tuesday.

In his acceptance of the 2005 Nobel prize in literature, Harold Pinterreferred to “a vast tapestry of lies, upon which we feed”. He asked why “the systematic brutality, the widespread atrocities” of the Soviet Union were well known in the west while America’s crimes were “superficially recorded, let alone documented, let alone acknowledged”. The most enduring silence of the modern era covered the extinction and dispossession of countless human beings by a rampant US and its agents. “But you wouldn’t know it,” said Pinter. “It never happened. Even while it was happening it never happened.”

This hidden history – not really hidden, of course, but excluded from the consciousness of societies drilled in American myths and priorities – has never been more vulnerable to exposure. Snowden’s whistleblowing, like that of Manning and Julian Assange and WikiLeaks, threatens to break the silence Pinter described. In revealing a vast Orwellian police state apparatus servicing history’s greatest war-making machine, they illuminate the true extremism of the 21st century. Unprecedented, Germany’s Der Spiegel has described the Obama administration as “soft totalitarianism”. If the penny is falling, we might all look closer to home.