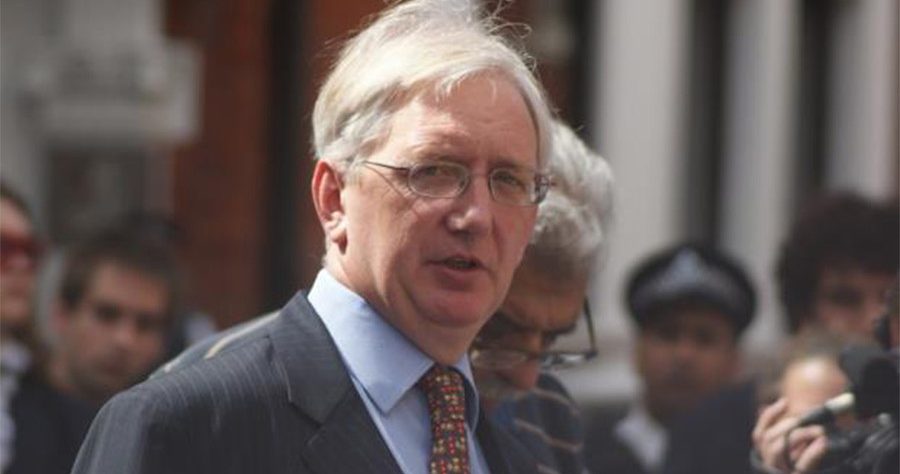 Charged With Contempt of Court.

Alex Salmond, a friend of Amb. Craig Murray, was First Minister of Scotland and leader of the pro-Independence Scottish National Party. When the party narrowly lost the independence referendum in 2014, Salmond stepped down and his deputy, Nicola Sturgeon, became, and remains, First Minister.

Salmond was thought to be considering a political comeback. Then came several sexual allegations against him, which Amb. Murray publicly described as false. Murray uses the word “fit-up”, British slang meaning to incriminate someone on false charges.

Murray believes that Sturgeon and associates are determined that nobody should find out what really happened. There has been a media campaign implying Salmond is really guilty.  Murray reports that there has also been a police campaign of intimidation against anyone, even ordinary folk making a Facebook post, who implies the charges were contrived. The chief prosecutor and his key staff are all Sturgeon appointees, as is the police chief.

The following are excerpts from a Craig Murray blog posted Friday:
(The full text of the indictment is included below. Or read it here.)

“… I know of four pro-[Scottish] Independence folk who were last week phoned or visited by Police Scotland and threatened with contempt of court proceedings over social media postings they had made weeks back on the Alex Salmond case.

“Then on Monday, a Scottish journalist I know had his home raided by five policemen, who confiscated (and still have) all his computers and phones. They said they were from the “Alex Salmond team” and investigating his postings on the Alex Salmond case. He has not to date been charged, and his lawyer is advising him at present to say nothing, so I am not revealing his name.

“Then on Tuesday morning, a large Police van full of police pulled up onto the pavement right outside my front gate, actually while I was talking on the phone to a senior political figure about the raid on my friend. The police just sat in the van staring at my house. I contacted my lawyers who contacted the Crown Office. The police van pulled away and my lawyers contacted me back to say that the Crown Office had told them I would be charged, or officially “cited”, with Contempt of Court, but they agreed there was no need for a search of my home or to remove my devices, or for vans full of police.

“On Thursday two plain clothes police arrived and handed me the indictment. Shortly thereafter, an email arrived from The Times newspaper, saying that the Crown Office had “confirmed” that I had been charged with contempt of court. In the case of my friend whose house was raided, he was contacted by the Daily Record just before the raid even happened!

“I am charged with contempt of court and the hearing is on 7 July at the High Court in Edinburgh. The contempt charge falls in two categories:

i) Material published before the trial liable to prejudice a jury.

ii) Material published which could assist “jigsaw identification” of the failed accusers.

“… [T]his is a blatant, one-sided political persecution. That much is entirely plain. I have therefore decided, in the interests of open justice, to publish [a link to the indictment is embedded in the Murray’s blog item] the entire indictment against me (with a single sentence redacted where I think the prosecution were excessively indiscreet). Neither the indictment nor the covering letter is marked confidential or not for publication. It is, so far as I know, a public document.

“… More fundamentally this indictment is the basis on which they are attempting to put me in prison – in fact the indictment specifies up to two years in jail and an unlimited fine as the punishment sought from the court. I think the public interest, and my own interest, in it being public is very substantial.

“The state believes it has finally discovered a way to put me in prison without the inconvenient hurdle of a jury of my peers. Contempt of Court is just decided by a judge. It is extraordinary that you can go to jail for a substantial two years with no jury protection and no test of “beyond reasonable doubt”; and on the whim of a judge defending what he may view as the dignity of his own office. This really is the epitome of bad law. To use it against freedom of speech is disgusting.

“…I am charged specifically with saying that the Alex Salmond case was a fit-up and a conspiracy in which the Crown Office was implicated. So I thought I would say it again now:

“The Alex Salmond case was a fit-up and a conspiracy in which the Crown Office was implicated, foiled by the jury. If Scotland is the kind of country where you go to jail for saying that, let me get my toothbrush.”

Amb. Murray plans to publish a point-by-point reply to the indictment in due course.  Below we post the text of the indictment, which is embedded in Murray’s blog: 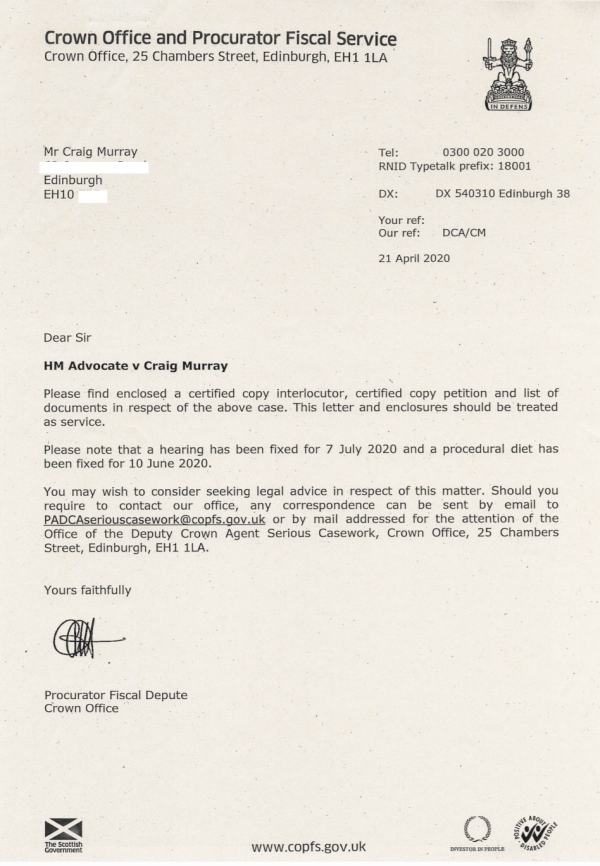 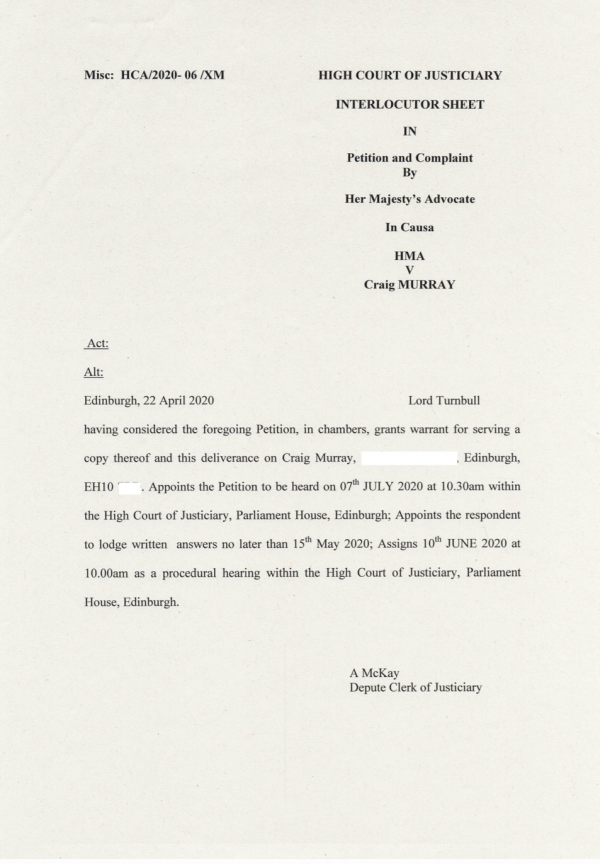 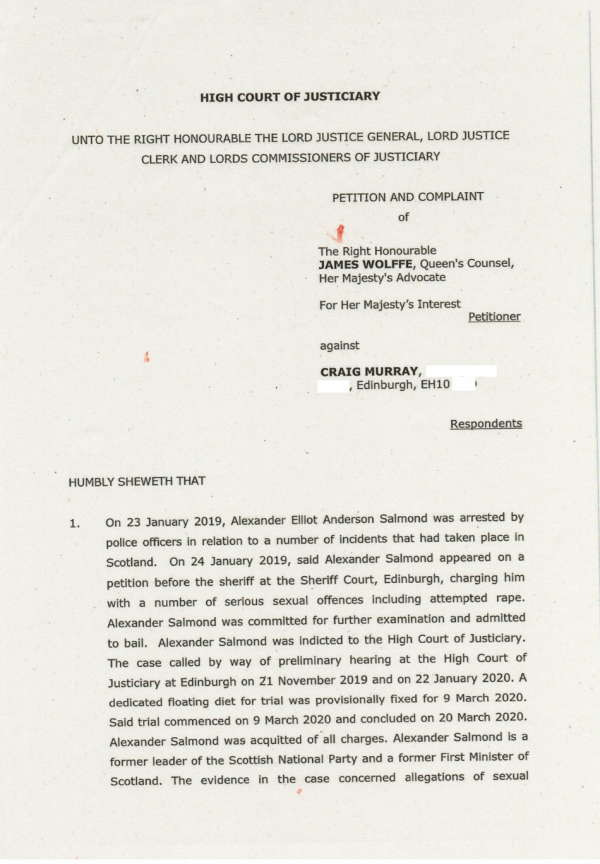 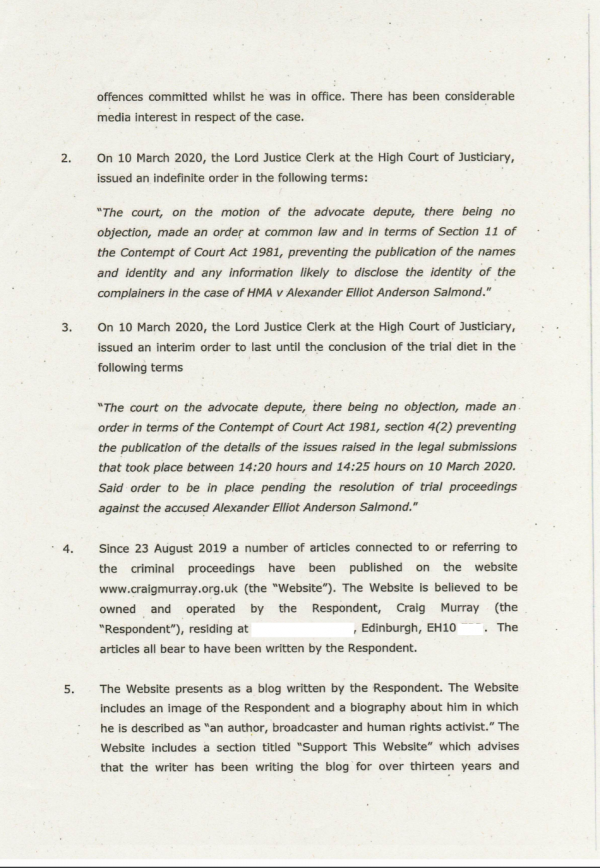 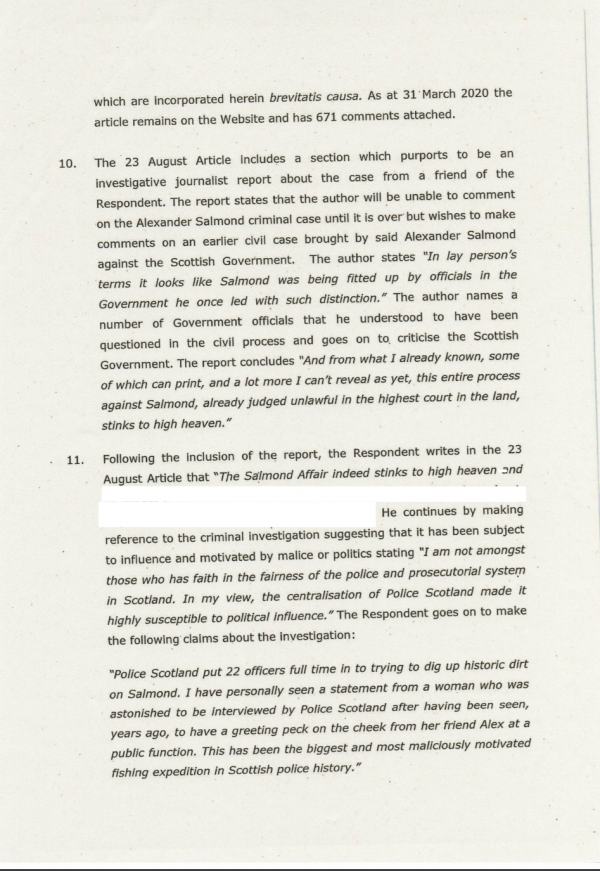 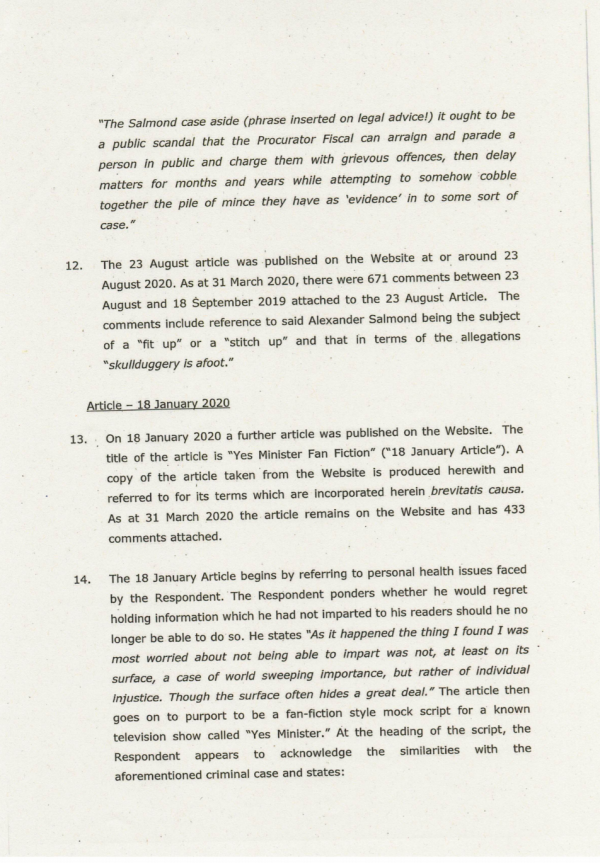 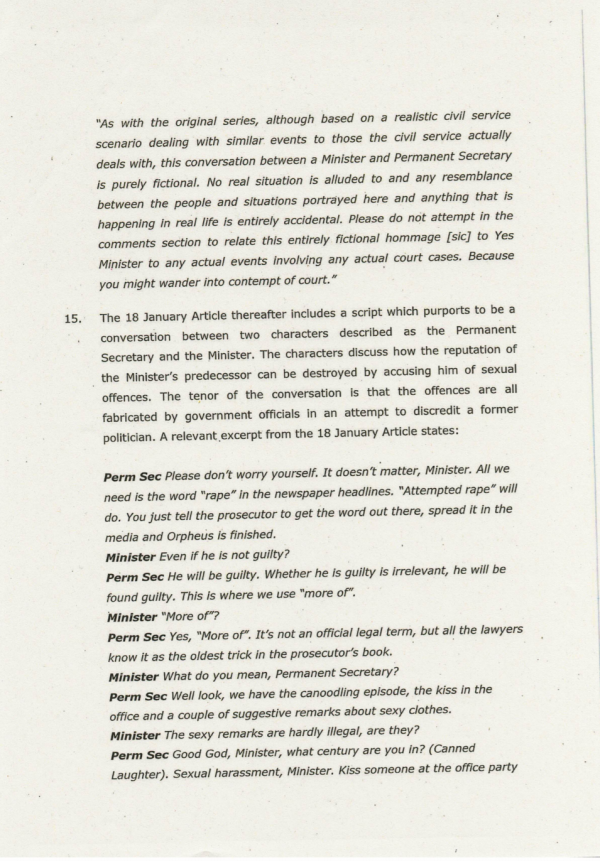 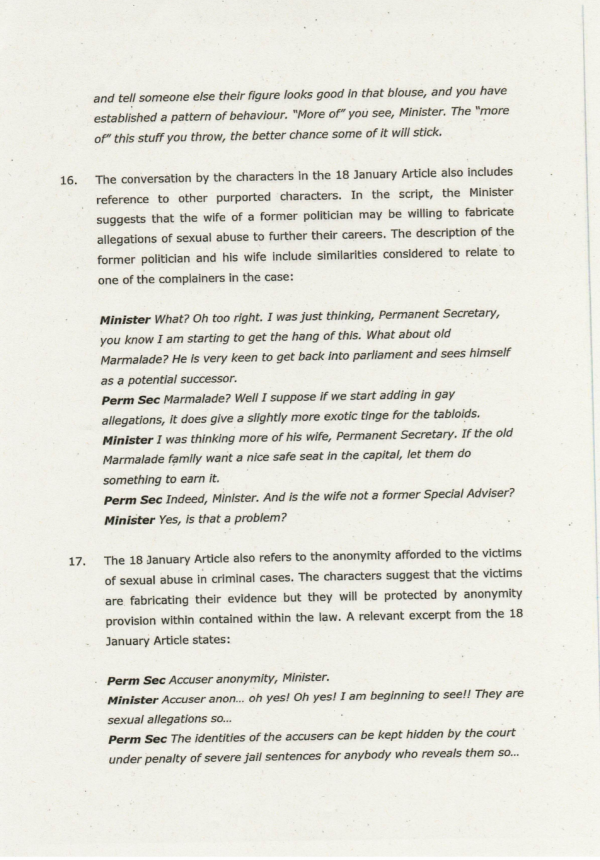 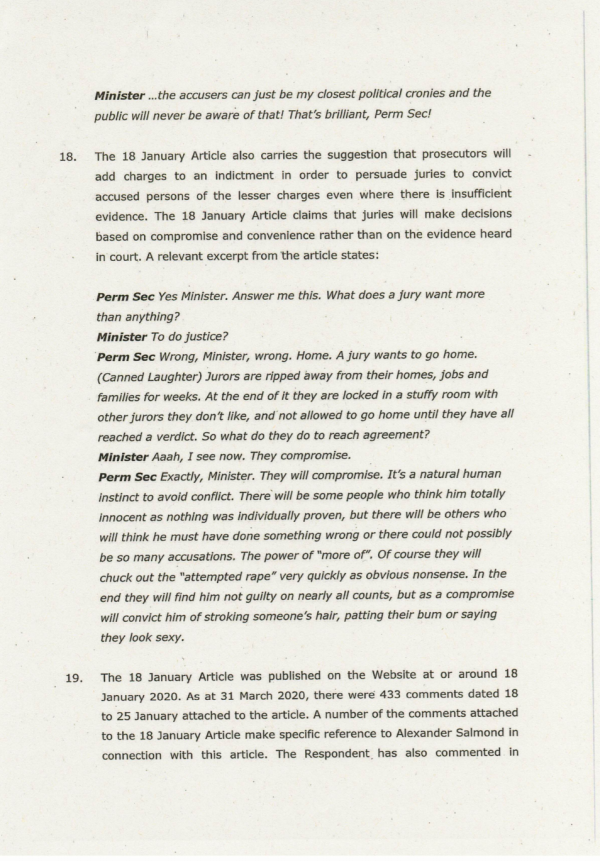 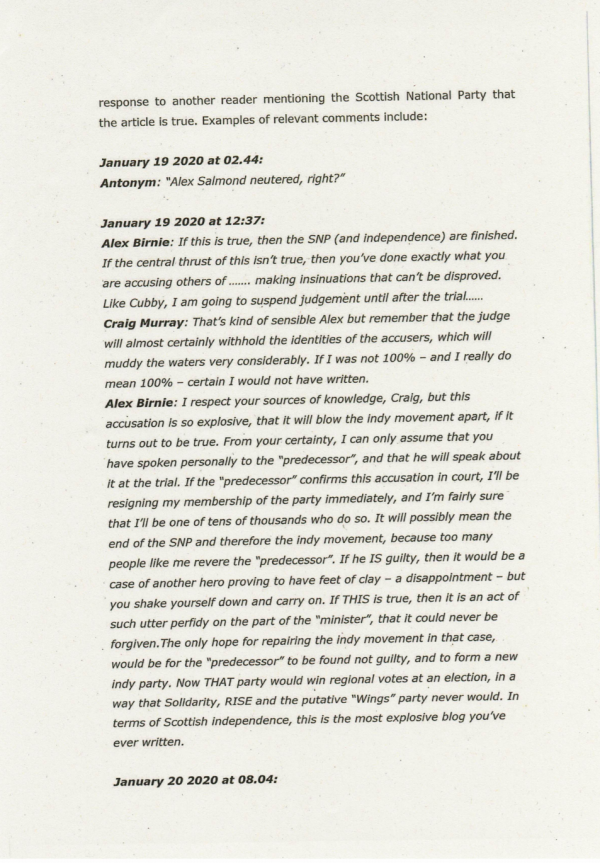 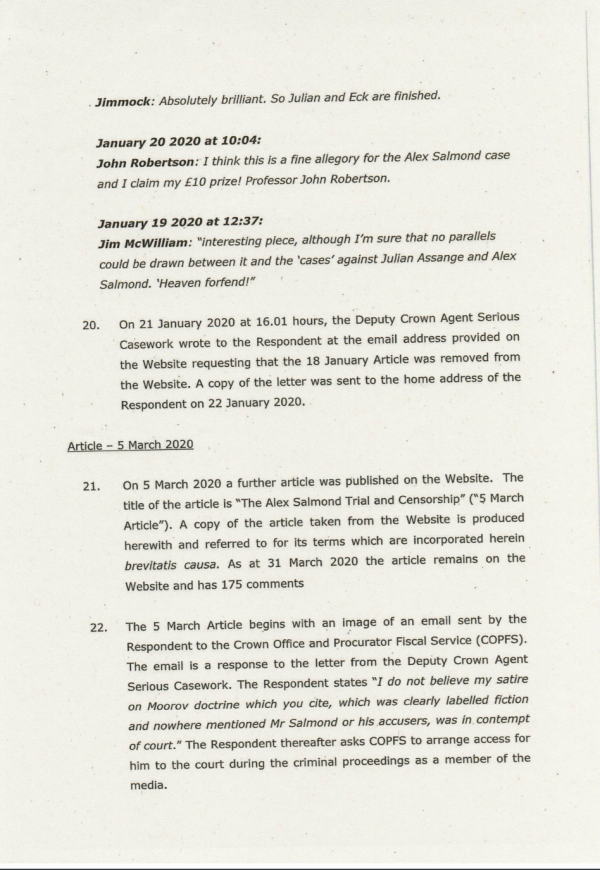 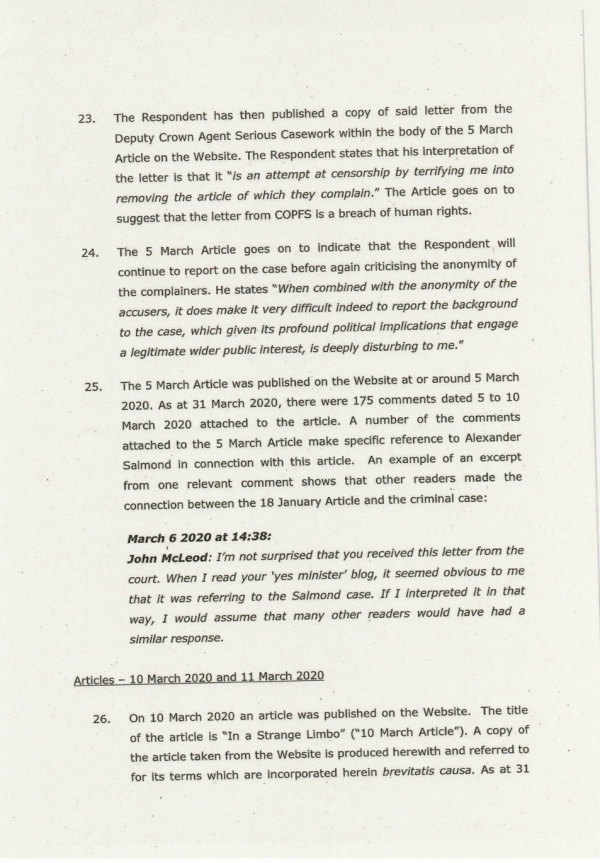 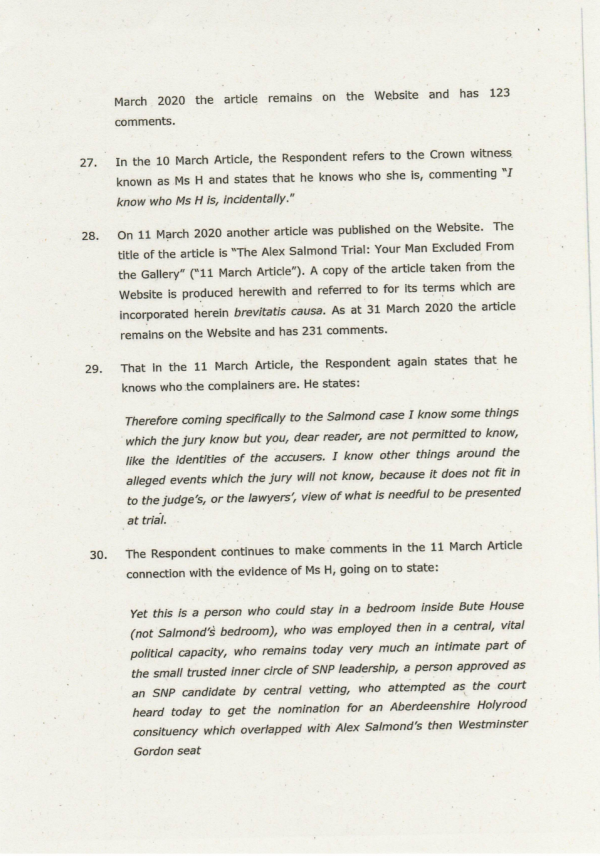 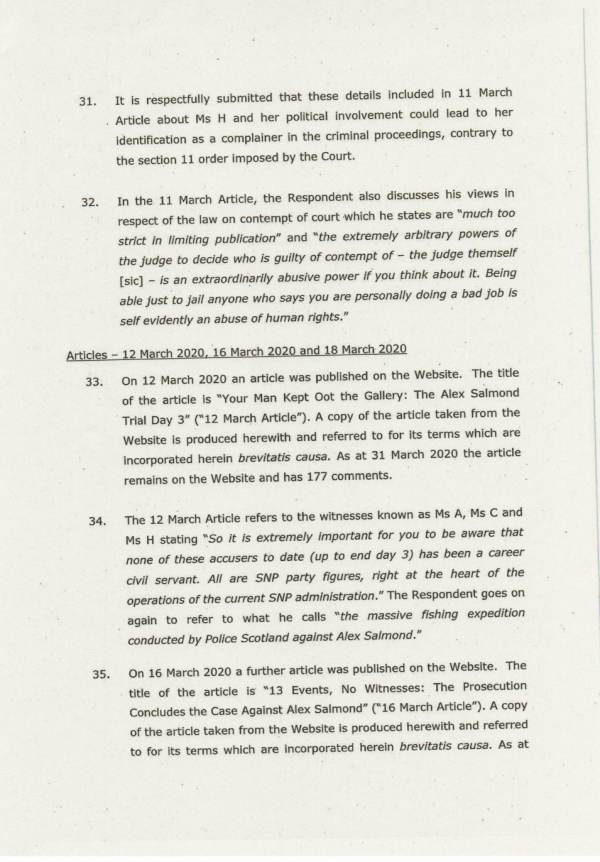 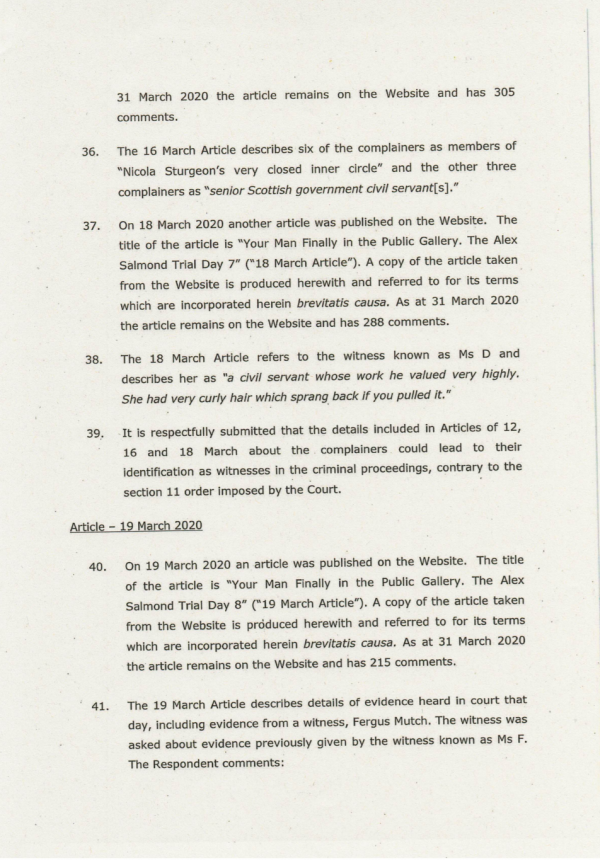 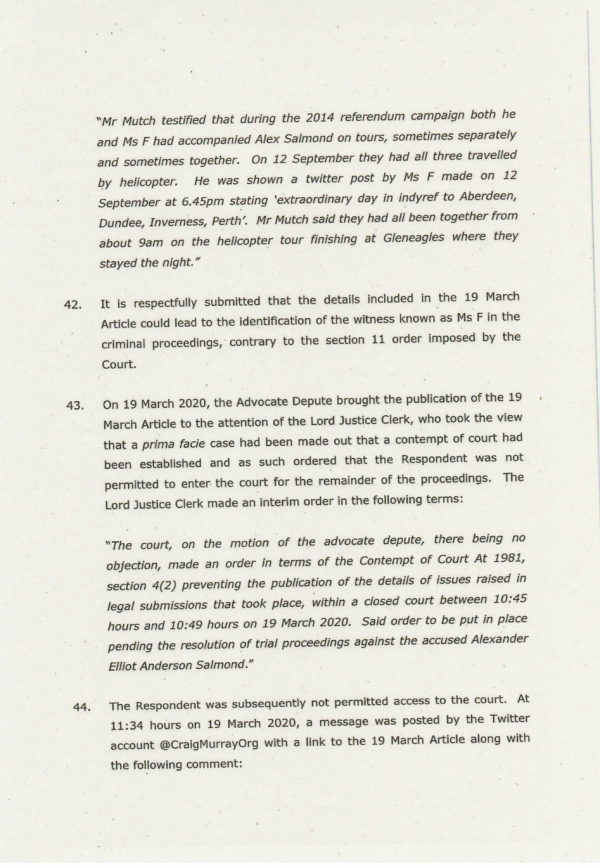 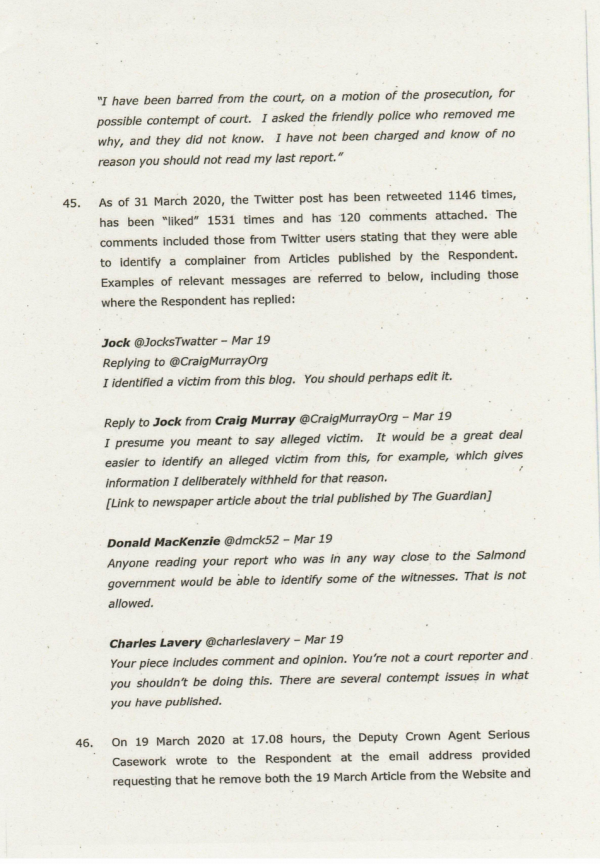 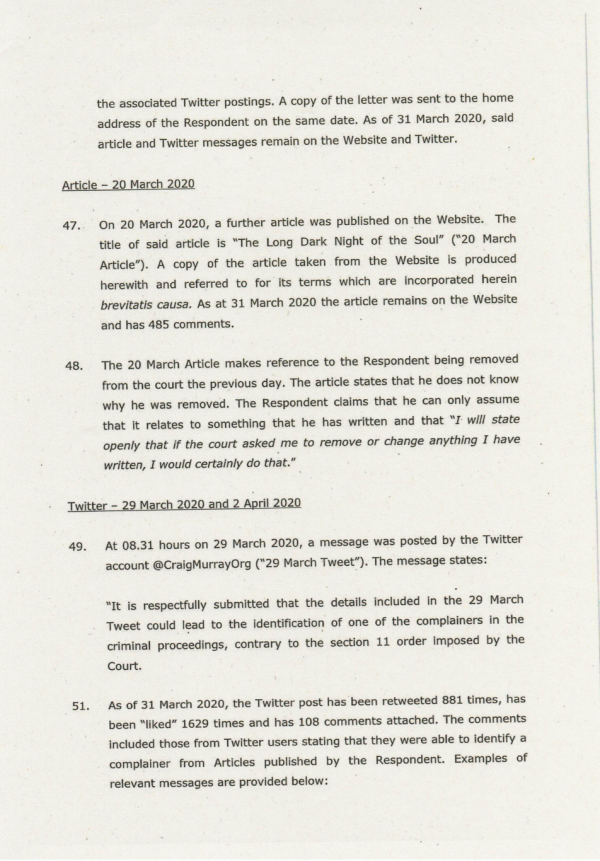 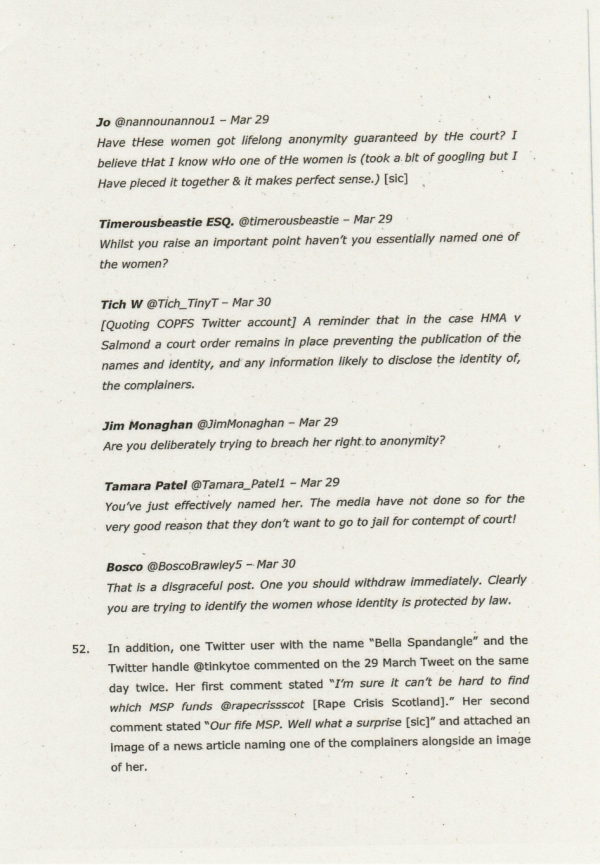 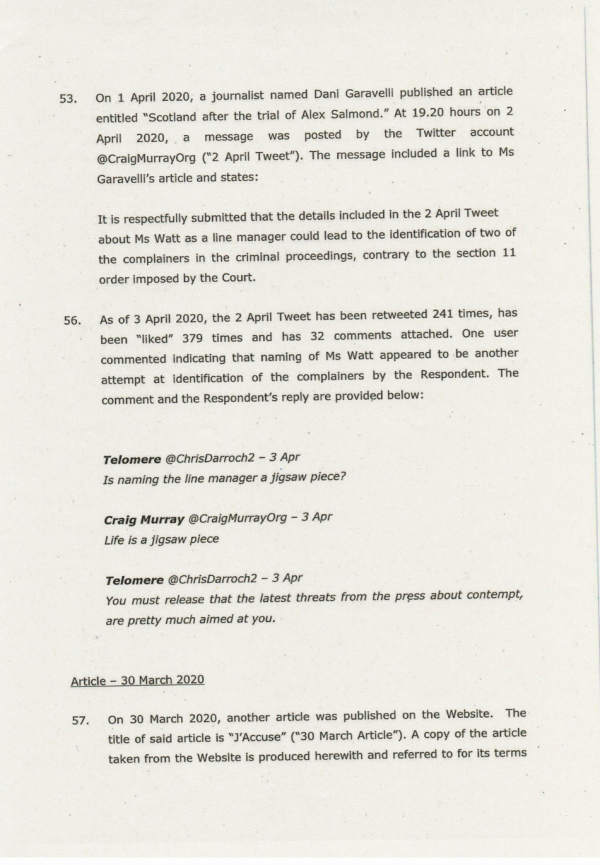 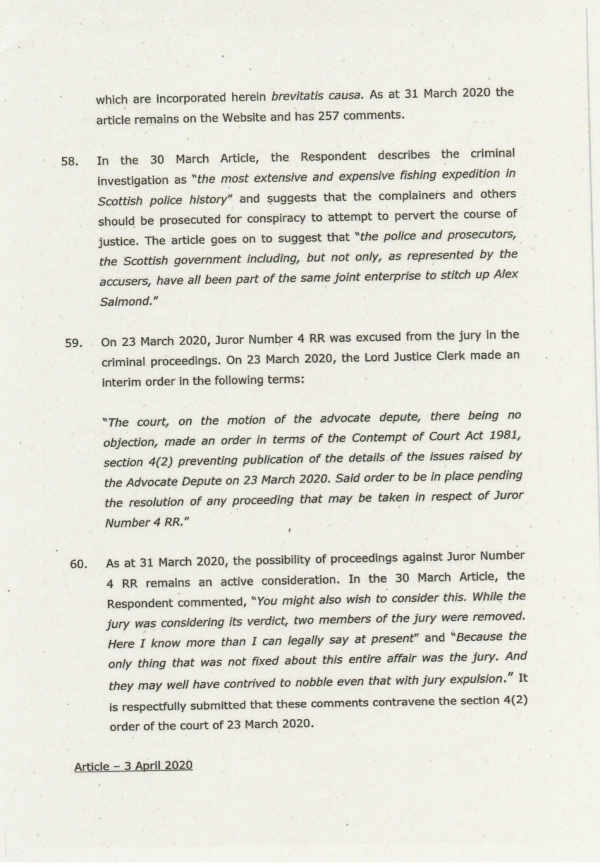 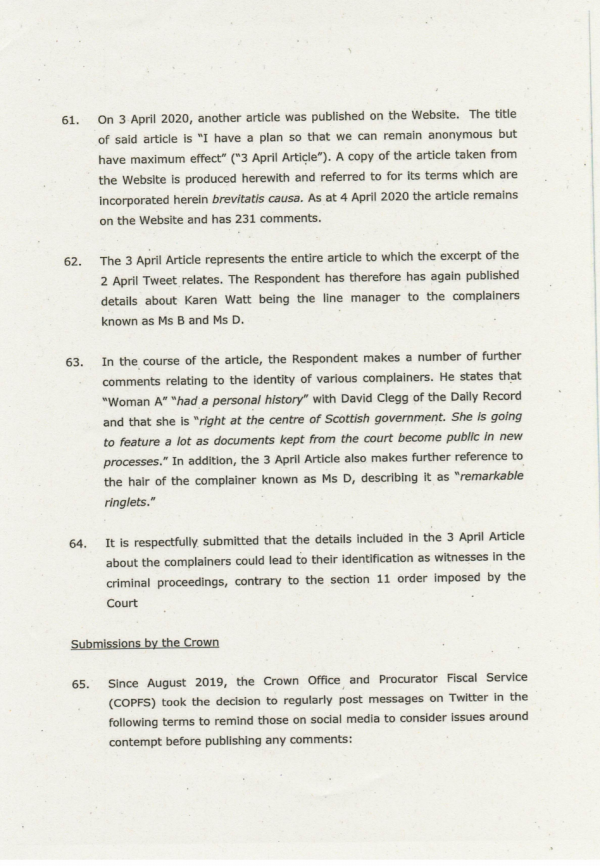 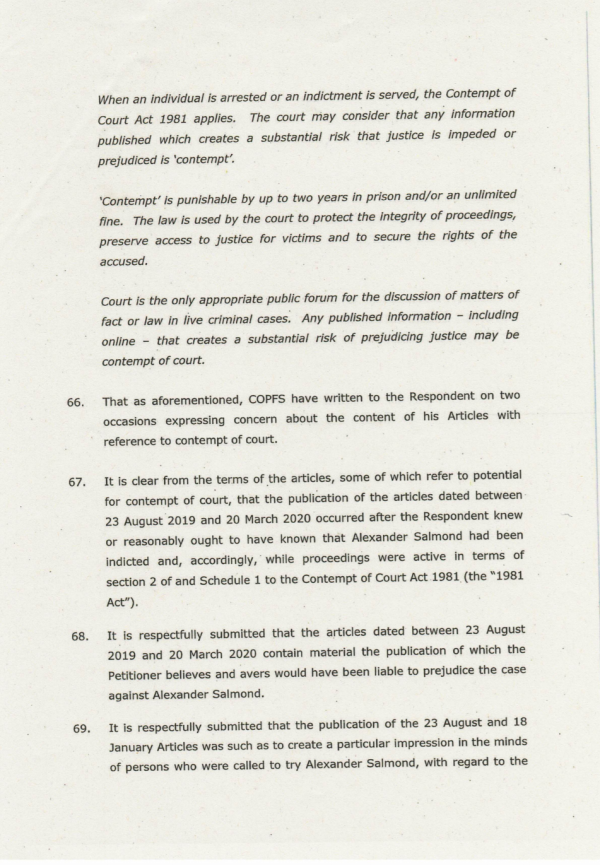 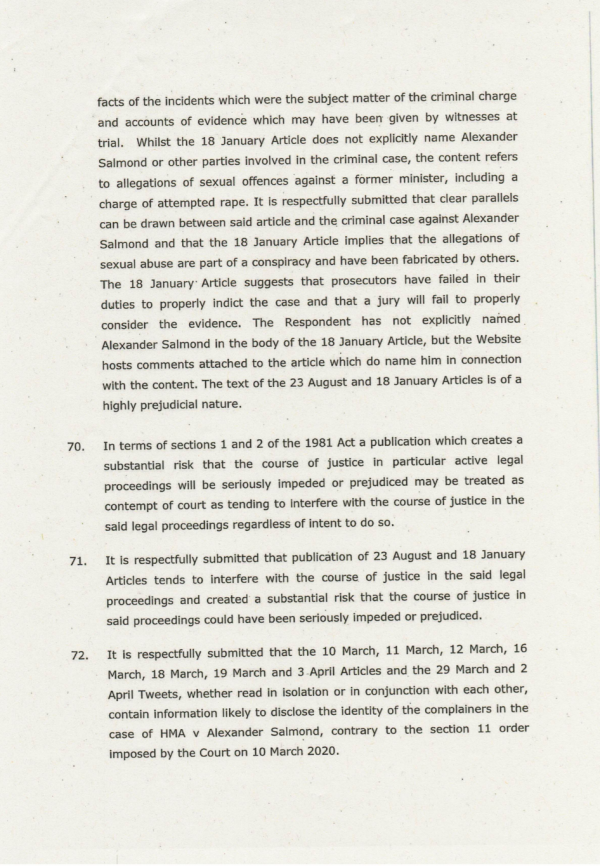 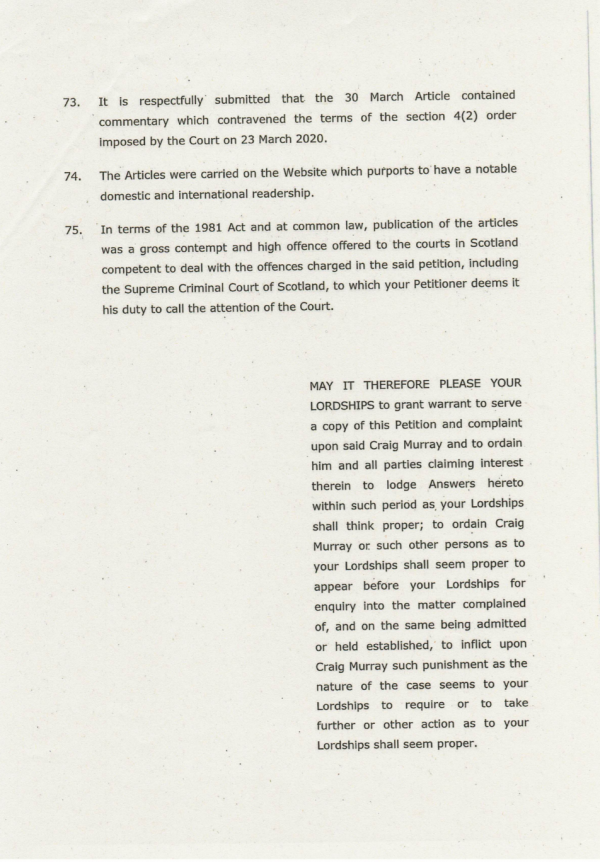 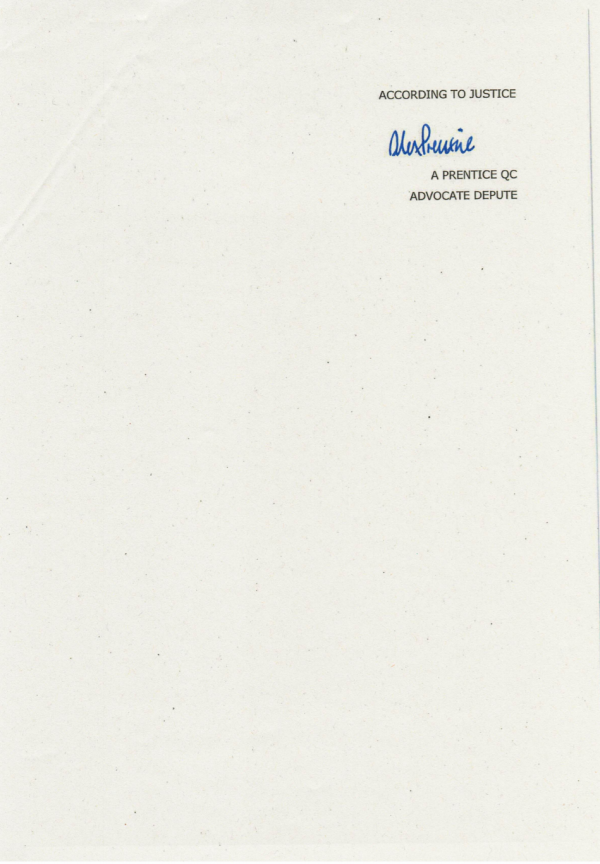 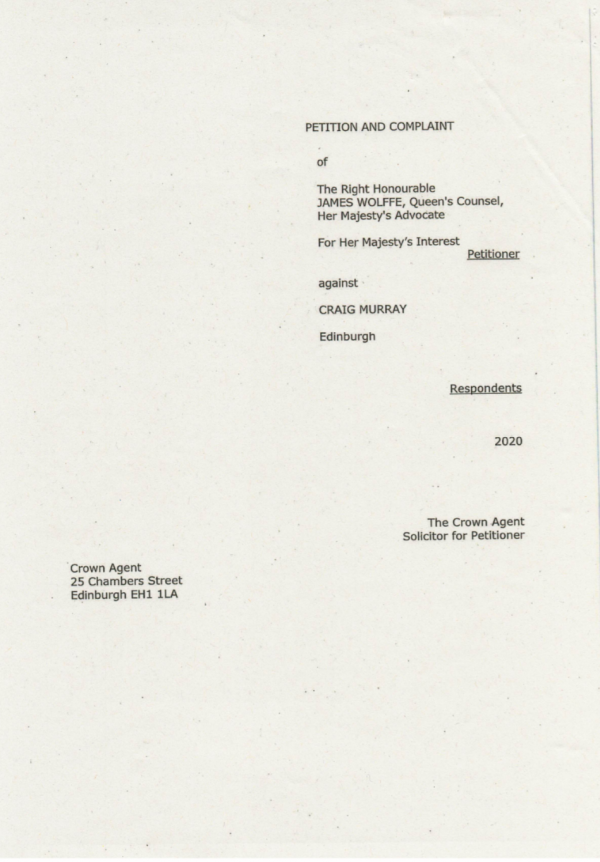