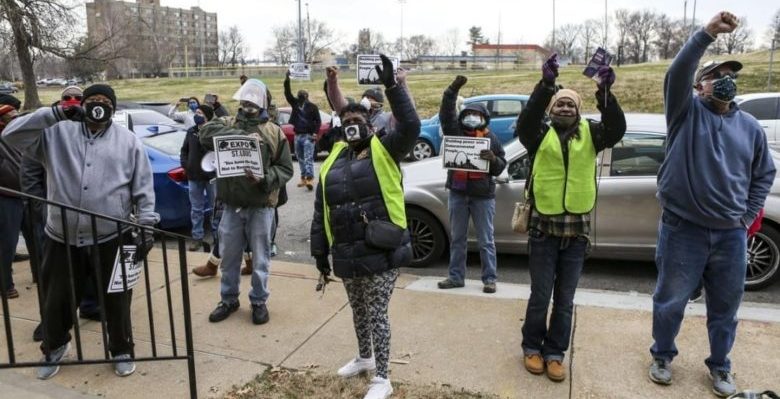 On February 10, Liberation News interviewed Ronnie Amiyn, an organizer with EXPO (Ex-Incarcerated People Organizing) St. Louis about the organization, the conditions in St. Louis jails, the protests and organizing of incarcerated people and the responses of jail officials and the media. Those interested in contacting EXPO can text EXPOSTL to 31996.

Liberation News: What is EXPO?

Ronnie Amiyn: EXPO is an organization of formerly incarcerated individuals and other people involved with the criminal justice system. We are a voice for people adversely affected by this system. We are an offshoot of EXPO Wisconsin, which started in 2014. In just a few years, we have made tremendous strides to address issues that reduce the quality of life for people transitioning after being incarcerated.

We are leading a few campaigns now. One is Unlock the Vote, which is a fight to restore voting rights for individuals convicted of a felony and who are now on probation or parole. We hope to restore these rights because people who have had a brush with law need to be able to return to society as assets, to be able to contribute in a positive way. And what is more positive than utilizing their voice? This is really a basic right being denied, sometimes because of one poor decision.

We have another campaign to break the school-to-prison pipeline. This system sees my demographic, Black men, as a threat early on, as early as preschool. We are not seen as people, as humans that can evolve and grow. That attitude shapes the trajectory of our existence in society. Everyone else is given an opportunity to grow up, even with their mistakes — we should have this too.

We as EXPO believe that wherever there is any form of structural discrimination against formerly incarcerated people or anyone involved in the criminal justice system, someone should represent them and give them a voice.

LN: I know that there have been protests in the St. Louis City Justice Center for a few months now over the jail allowing COVID to spread and not providing PPE, the lack of access to warm clothing, and the lack of food, especially nutritional food. How many protests in the jail have there been in the past few months?

RA: There have been at least three major protests that I know about. Initially, of course, before any protests, those in the CJC tried to write letters to staff, to case workers, to administration. They wrote grievances and submitted them in the way that they are supposed to.

They asked for more and better PPE, access to COVID testing and isolation for those sick or with symptoms, as well as more nutritional food and adequate calories, warmer clothing and blankets in the winter, COVID-safe visits with loved ones, exercise and recreation access and the ability to research and study their cases. Much of this is mentioned in the letter we received from an inmate.

However, detainees and protesters learned from sympathetic correctional officers that these letters and grievances did not make it up the chain of command, or were even thrown in the trash! These people have a right to be heard. They are still human beings, still fathers, sons, brothers. And it is important to remember that these people are in jail, not prison — most have not been to court or before a judge. They are not yet “guilty.”

There is a natural progression of protest when rights are being denied and not respected. The first protest, as mentioned in the letter, took place on December 29. It was nonviolent; detainees just stepped outside their cell and did not lock down at that time. The COs responded with extreme violence and retaliation. After the protest, some were sent from the CJC to the Workhouse.

LN: What is “the Workhouse” and what is its relationship to the CJC? Why are activists like those in EXPO struggling to get it shut down?

RA: To clarify for those that may not be familiar — jail is where you go after you get arrested but before you go to trial in front of a judge. Jail is especially for people who cannot pay bond, so jail is for poor people, really.

Conditions in the Workhouse are very bad. There is severe mold, undrinkable water and the food is inedible and should not be served to humans. The whole place is a health hazard, especially during COVID. We actually won our campaign to shut down the Workhouse, and it was supposed to be shut down in January. But apparently the city found reasons to keep it open.

One particular reason they kept the Workhouse open was this situation — jail administration using the Workhouse to separate and punish protest organizers from the CJC. They transport CJC protesters to the Workhouse to isolate them from the other detainees in the CJC general population.

RA: We are still learning exactly what happened. As far as how it was planned and executed, I would be reluctant to say, as the narrative can always be changed. But I know the reasons were just. This is the natural progression of protests when the protesters aren’t heard, like I said.

Part of why we are still trying to learn what happened is because there was immediate retaliation. Individuals were transferred to the Workhouse. COs and jail officials trashed personal effects from cells; this means letters from loved ones, important legal documents and research, and other important possessions. They said that they were damaged by fire hoses and fire, and just threw a lot of stuff away. We know that detainees were kept wet and dirty and not allowed to clean or shower, despite very cold conditions. We know that some were even denied food.

When Jimmie Edwards [the St. Louis Public Safety Director -LN] talked about protest, he said it started out as “one defiant individual making trouble at 2 am, getting in a tussle with a guard, and then others joining in.” This is not accurate. He is trying to act like some criminal was misbehaving and then all of the other criminals joined in. We don’t believe that for a second. He is trying to make it like there was no reason for anyone to be protesting.

Jimmie Edwards is also saying that the detainees all “jimmied” their locks to join the protest. We are very sceptical of this — jimmying locks in a maximum security jail? It is ironic, though, he would use the word “jimmy,” meaning to force a mechanical object to malfunction, because that is how we see him — Jimmie is defective, not working like the “public safety” director should.

LN: I want to ask you about how you felt about the media coverage of Feb. 6, as well as how jail and city officials talked about what happened. Jimmie Edwards called the protest “very aggressive, very violent” and “certainly not” a protest in response to COVID conditions in the CJC, despite the fact that inmates had repeatedly issued their demands, and he went as far as to say that there had not been a positive case of COVID in the CJC before last weekend, which is just ridiculous seeing that we have had COVID cases in the U.S. for over a year. What is your response to how the media, jail and city officials have covered the protests before Feb. 6, and the uprising on Feb. 6?

RA: I would have hoped, and I do hope, that the media would take more time to scrutinize the public officials they quote. Hold them accountable. The media acts like they work for the people, speak for the people. And in this case, there is cause for more questions, more scrutiny.

We hope that there is an investigation of the events that led up to the protest on Feb. 6. We want an investigation into the conditions, into detainees not getting PPE, sustenance, medical treatment and clothing. We want COVID vaccines for detainees. They are in Phase 3 lockdown, and they are extremely vulnerable. It is impossible to social distance in a cell block, or from your cell mate. Jail inmates are obviously more susceptible to COVID, and this is not being addressed. Officials, COs and jail administration aren’t adhering to protocols. The media should investigate these things.

Sometimes issues in jails and prisons are hidden from people. The officials try to hide their bad deeds, and this is easier to do in a jail, because the detainees have been forgotten and left behind, their guilt has already been decided. These protests help bring these issues to the surface.