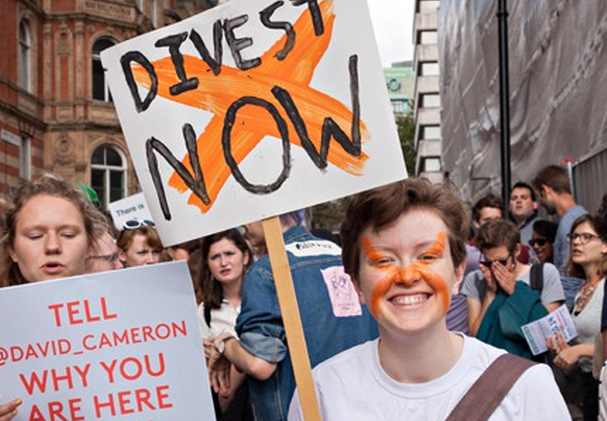 A young demonstrators smiles as he holds a placard, calling for institutions across the country to divest from fossil fuels, 21 September 2014. Photograph: Samuel Hardy/Alamy

“We are quite convinced that if he were alive today, as an astute businessman looking out to the future, he would be moving out of fossil fuels and investing in clean, renewable energy,” said Stephen Heintz of John D Rockefeller, as he announced that the heirs to one of America’s most famous dynasties, which was built on oil, were pulling their philanthropic funds out of fossil fuels.

For sheer symbolism if not financial value – only $60m (£37m) of the Rockefeller Brothers Fund was invested in fossil fuels – it was perhaps the high point of what has become known as the fossil fuel divestment movement.

With its roots in US campuses, the campaign to get institutions to pull their financial investments as a way of tackling climate change has seen a total of $50bn divested so far, according to the US Fossil Free campaign. The University of Oxford says the campaign has grown faster than any other previous divestment movement, including those against apartheid in South Africa and tobacco.

Fossil Free lists 837 institutions and individuals as having committed to divesting so far, and says the rate of those signing up has doubled since the start of 2014.

US colleges and universities have been in the vanguard. “Here’s my bet: the kids are going to win, and when they do, it’s going to matter,” Bill McKibben, the environmentalist and one of the figureheads of the movement, told Rolling Stone.

The 13 US universities and colleges that have divested so far are mostly relatively small institutions, with the notable exception of Stanford, which in May said it would pull its investments from coal after a long-running student campaign. The university’s total endowment is worth $18.7bn, though it’s not divulging how much of that was in coal.

Other big name US universities have proven hold-outs to students’ calls so far, including Harvard, though in April it did make some concessions to divestment campaigners, saying it would sign a UN-backed code of responsible investment. But that doesn’t commit Harvard to dropping its fossil fuel investments.

Last week, the Australian National University in Canberra said it would divest AUS$16m (£8.7m) in seven fossil fuel companies. But in Europe, according to Guardian research, before Glasgow’s decision today, no university authorities had made the decision to divest. Nonetheless, McKibben told the Guardian that on the European campaigns “it feels to me like there’s a lot of momentum.”

The UK campaign started in earnest in October 2013 with the launch of Fossil Free UK, focused on the £5bn held by UK university’s endowment funds. Student campaigns have popped up on campuses across the country, including those with the three largest investments, Cambridge, Oxford and Edinburgh.

Elsewhere, the divestment campaign has scored some moral victories, persuading individual churches and groups of churches to pull their funds. In July, the World Council of Churches, which represents over half a billion Christians, said it was pulling its fossil fuel investments.

But the council’s holdings are relatively small compared to its member churches, such as the Church of England, which has £5.2bn invested in stock marketsincluding in major companies like oil giant Shell.

Naomi Klein, the Canadian author and activist, told an audience in London on Monday that the fossil fuel divestment campaign was a key step forward in tackling climate change: “I think this is part of a process of delegitimising this sector and saying these are odious profits, this is not a legitimate business model…

“This is the beginning of the kind of model that we need, and the first step is saying these profits are not acceptable and once we collectively say that and believe that and express that in our universities, in our faith institutions, at city council level, then we’re one step away from where we need to be, which is polluter pays.”