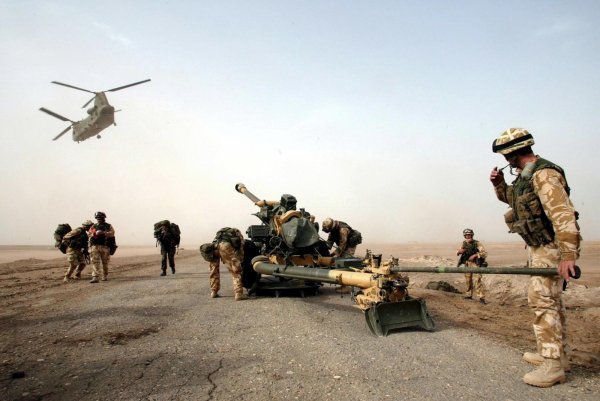 Four Lessons We Must Learn From Iraq War And Chilcot Report

Above Photo: A 105mm gun is dropped by a Chinook helicopter to British 29 Commando Regiment Royal Artillery on the Fao Peninsula in southern Iraq. March, 2003 Getty

Note: It is worth commenting that the make-up of this commission was handpicked by former prime minister Gordon Brown and is made up of people who ensure a white wash. So, what we are learning (most of it already known) is the tip of the iceberg and no doubt there is much more people are not being told. Here is a review of who was on the commission investigating the Iraq War, it will not give you confidence in what we were told.

The war was not a ‘mistake’ or an ‘accident’. It was calculated and intentional.

I was a soldier in Tony Blair’s wars. I have little faith in an establishment inquiry delivering the actionable legal charges against senior politicians required to make Chilcot a meaningful exercise.

Regardless, here are four lessons we must learn from Iraq:

1. We already know what happened, Chilcot is just an establishment take on events

All the evidence discouraged an attack on Iraq yet it looks like Tony Blair and his close allies lied to take Britain to war. It cost the lives of 179 soldiers and hundreds of thousands of Iraqis. In the end the war also gave us Islamic State (Isis/Daesh) and so the horror slithers on.

In recent and coming weeks the real issue – why we went, the deadly deception – will be blurred by references to peripheral issues about the conduct of the war. Let’s be clear. Bad equipment, for example, is secondary in the big scheme of things.

Nor was the war a “mistake” or “accident”. Tripping and falling is an accident, getting drunk and trolling your boss at the Christmas party is a mistake. Iraq was neither. It was calculated and intentional.

Going to war with Iraq required careful planning and deep forethought. I would call that premeditated murder.

Iraq exposed Blairism as the art of sounding progressive while being vicious. Whatever the inquiry yields, we also know Blair’s legacy has an undead zombie quality. It is dead and yet it keeps on killing, as the recent attacks in place like Iraq, Paris and Brussels prove.

Blair’s legacy has an undead zombie quality. It is dead and yet it keeps on killing,

Like 179 British soldiers, Blair’s ideology died fighting for Uncle Sam. Like the equipment in Iraq it was not fit for purpose. It can’t be reconditioned. The time has come to say goodbye.

Moreover, let it be known to every Blairite – and every other British backer of the war – that the deaths of those 179 British soldiers belong to you. Have the moral courage to take ownership of those lost lives this week.

3. The heroes of the Iraq War were the ones who resisted it

There is much talk of war heroes these days. History will show that the heroes of the Iraq War were those who opposed it. Just a few examples:

Jeremy Corbyn. An anti-war hero forged in the movement which opposed Iraq’s destruction.

4. We need a referendum on the Special Relationship which dragged us into Iraq

Throughout the EU Referendum there was barely a mention of the UK’s Special Relationship with America, yet it has been infinitely more damaging than EU membership.

Both sides of the EU debate, if they are honest, have a strong interest in binning the Special Relationship – especially given the ongoing tragedy of Iraq.

For example, anyone genuinely concerned for British sovereignty or independence should direct their ire west in the wake of our recent wars.

Throughout the EU Referendum there was barely a mention of the UK’s Special Relationship with America, yet it has been infinitely more damaging than EU membership.

Note that not one single soldier died in a pointless war the EU dragged us into and not one single EU base squats – parasitic and unwelcome – on British soil.

At the same time, if you are honestly committed to inclusiveness and multiculturalism you must fight to isolate any nation which puts rapacious savagery against people of colour at the centre of both domestic and foreign policy.

If you want to deal with a really progressive question you must look to the US, forget Brexit and fight for an Amerexit in legal, political, military and economic terms.

This is the debt we owe the Iraq War dead. The centenary of the Battle of the Somme has just passed. Note that its astonishing death toll pales when compared with that of Iraq. We must never forget and never repeat a criminal tragedy on such a monstrous scale.