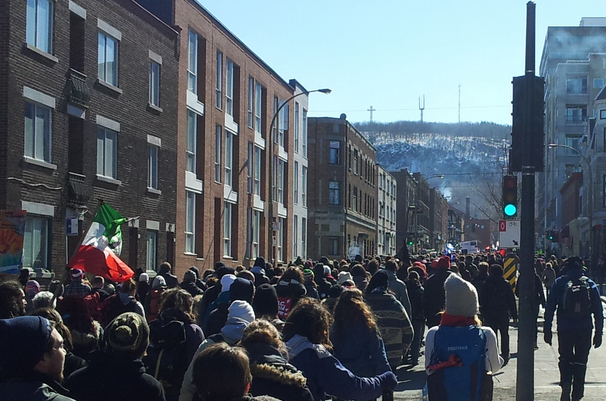 Four Reasons Québec Is On The Streets Fighting Austerity

Night demonstrations — a fixture in the 2012 Quebec student movement — were held on Tuesday in Montreal and Quebec City, and again on Friday in Montreal, with thousands filling the streets as well as hundreds of armoured police.

The mobilization against austerity measures was met by strong police reaction. On Thursday of the same week, the Quebec Liberal government tabled a budget “balanced” by large cuts to education, health care and other social services spending.

A Popular Protest Against Austerity and the Petro-Economy was held on Saturday March 21 with between 5,000 – 10,000 taking to the streets of Montreal. The event was repeated with another large turnout on Saturday, March 28, with more protests held in Montreal and around Quebec.

The mobilization is growing rapidly, though still trying to find it’s footing and strategy. Facing a government set on standing firm behind its austerity approach, people and organizations have been joining the Printemps 2015 movement, planning for a busy April leading up to a “Social Strike” May 1.

Here are four reasons why Quebec is mobilizing against austerity.

The Quebec Liberal budget — presented “with pride” by Finance Minister Leitao — outlined deep cuts to health care, education and other public services. Taxes for corporations and some individuals were reduced, following the flawed austerity philosophy of focusing not on revenue generation but spending reduction.

Many in the Printemps 2015 movement see these measures as another step in the process of favouring interests of the rich and corporations at the expense of most citizens.

Notably, the budget assumed certain specific outcomes for the ongoing negotiations with public-sector unions, representing 550,000 employees. The government is asking for wage freezes followed by one per cent increases in coming years. The unions are asking for much more, and if they get their way it is hard to believe the budget as proposed will be balanced. The government is relying on reaching agreement under its own terms.

Le Front commun, representing over 400,000 public-service employees, has been discussing various escalation tactics, including a strike, and 2,500 members will be meeting on March 31 to discuss plans moving forward.

“[The government is] trying to privatize healh care, everything, same with education,” said Manon Labelle, a hospital attendant, at a protest on March 28. Labelle works at Notre-Dame Hospital, one of several in the University of Montreal system actively mobilizing, including planning strikes, working both on their own and in collaboration with union centrals.

On Monday March 23, over 60,000 students were on strike because of the implications austerity measures will have on their education. The first day saw confrontations with police in downtown Montreal and some students angry their classes were not being held. The April 2 Quebec “National Protest” organized by ASSÉ will have over 102,000 students confirmed on strike and many more to vote on strike mandates.

The mobilization of university populations has also had support from unlikely non-student sources. David Eidelman, Dean of the McGill Faculty of Medicine and the university’s highest paid staff member, came out against proposed health-care reforms.

“As written, Bill 20 seriously compromises the activities that are at the heart of our mission,” he said. Medical students at McGill University voted to strike March 30 to protest the proposed legislation.

Students of Politcal Science at Concordia voted to strike for April 1 and 2, joining several more typically progressive associations on campus, including Faculty of Fine Arts students,who are on strike March 23 – April 2, with the opportunity to vote to continue after.

Though the future of the student strike is currently in question, and will be debated this coming weekend at an ASSÉ congress, including whether to wait until autumn for an unlimited strike, student associations in Quebec have been able to clearly demonstrate their ability to mobilize behind a common cause.

“We supported the grassroots mobilizers. That was our plan the whole time because we know a true strike comes from the department, you know, right from the base,” said Ben Prunty, President of the Concordia Student Union.

3. To denounce escalations in police violence

On Friday, Montreal police, the SPVM, pepper sprayed many protestors in the crowd as the demo tried to walk against the flow of traffic on St. Catherine, a busy commercial street.

Ironically, the SPVM are also in labour negotiations, and wear red square stickers, reminiscent of the symbol of the 2012 student strike.

As the crowd approached St Catherine another way, police in riot gear closed in on the crowd from three sides. Around a dozen flash-bang grenades were shot into the area at random as police beat their batons on their shields, and on coughing bodies, many in their first week of going to demos, having not been old enough to be involved in 2012.

The day before in Quebec City, police lined up across a road near the National Assembly and shot tear gas grenades at advancing protesters from feet away, badly injuring Naomie Trudeau-Tremblay in the face. Along with the man bitten by a police attack dog earlier in the week during a night of mass arrests, Trudeau-Tremblay quickly became something of an icon for the struggle on the streets. She walked again in a protest days after the incident.

The Quebec League of Rights and Freedoms has denounced the use of police violence. Gabriel Nadeau-Dubois, a spokesperson during the 2012 student strike, noted a disturbing trend among numerous media commentators and Facebook users heartily advocating for the use of repressive police force on peaceful protesters.

Whether the police violence outrages people into action, or sets a fear-stricken precedent that keeps people away in fear remains to be seen. The same dynamic in 2012 brought protesters out into the streets for nightly demos for months.

Protest demonstrations are popping up with a variety purposes. In 2012, in Montreal especially, there were times when there were too many protests to keep track of. The Spring 2015 movement is approaching that pace.

On Saturday, an anti-islamophobia protest was held in Montreal against a fascist group, PEGIDA, as well as a protest against Hydro-Quebec fee increases. Also, a feminist night demo was called for March 31 after Health Minister Barette anounced the government would limit the number of abortions doctors could perform per year.

Amid all the action, some commentators claim that because the government does not need to hold an election until 2018, the mobilization will not achieve much.

Jean Charest, Premier of Quebec in 2012, held an early election largely to decide the tuition question because the student movement was so effective at being disruptive. That election ended his political career.

Lacking immediate goals like a tuition freeze, there is uncertainty about the movement’s direction. The struggle is so big and interconnected that it is hard to see it in its entirety. For example, a popular education event about austerity on March 26 at McGill featured panellists speaking about how austerity is related to each of immigration, militarization, housing, disabilities and accessibility, women, and climate justice.

“It is not like 2012. This time, it is a global political struggle,” wrote student Gioia Cazzaniga in “Lettre à ma mère: porqoui je fais grève” (A letter to my mother: why I strike). And with such an immense scope, the movement risks not achieving tangible gains in the short-to-medium term.

Some students leading ASSÉ are discussing what timeline makes sense for mobilization to have various sectors of society collaborate. In their eyes this may tangibly look like waiting until fall for the public-sector unions to potentially launch legal strikes. However, some in the movement call for sustained and escalating activity through the spring.

May 1, the “Social Strike,” is one clear date throughout Quebec. Labour strikes, protests and direct actions like shutting down highways, are being planned with the idea of putting on a show of force, demonstrating that the current austerity agenda will not be tolerated.

Other highlights include the massive April 2 student-led “National Protest” in Montreal and the April 11 Act on Climate March in Quebec City.
David Gray-Donald studied Environment & Biology at McGill University then worked there facilitating community sustainability projects and doing corporate social responsibility consulting. He is trying to undo our reliance on fossil fuels and educate himself on how to be a responsible white guy. He lives in Montreal and Toronto.