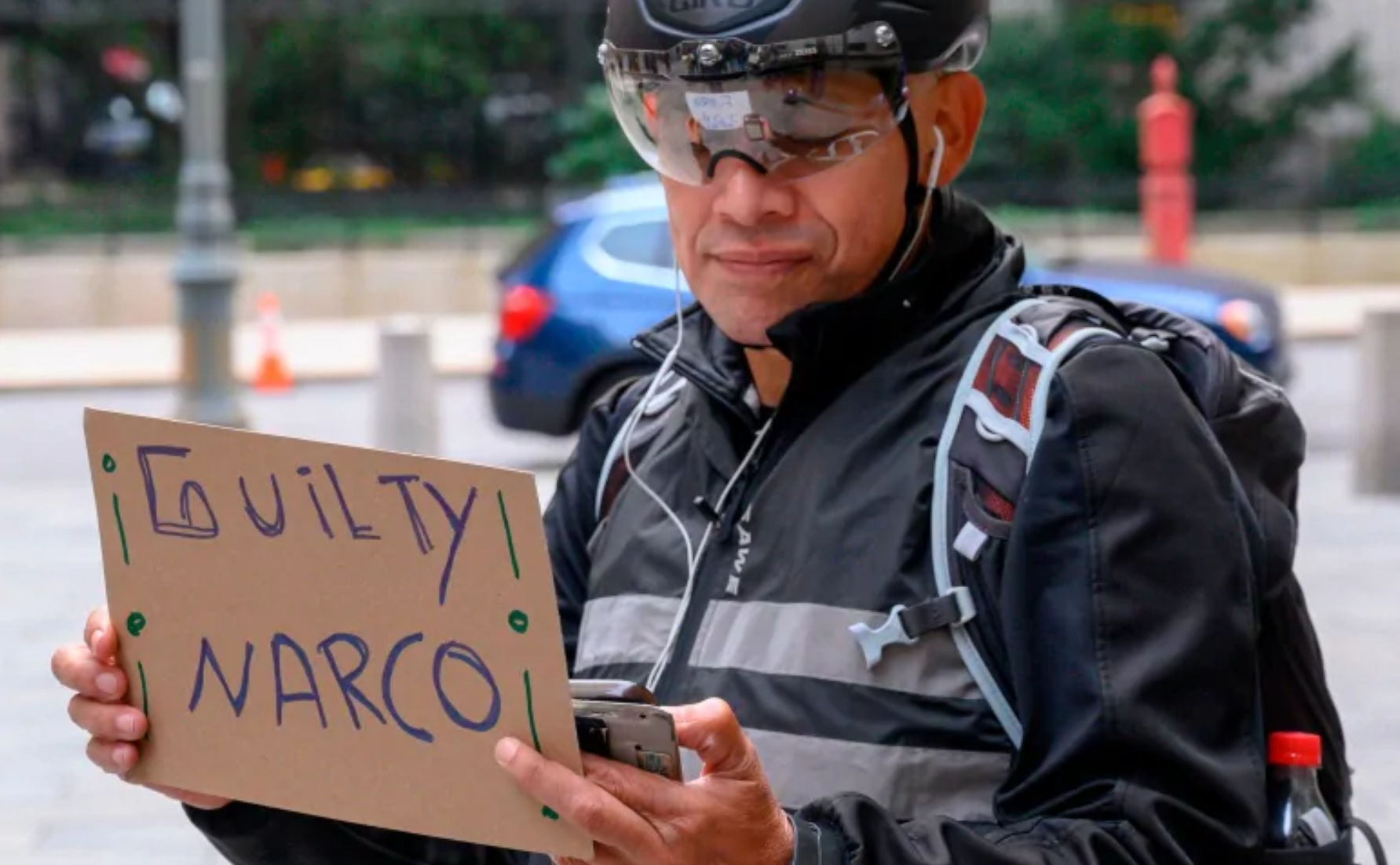 Four Takeaways From US Trial Against Honduras President’s Brother

Above photo: A man holds up a sign while protesting against Juan Antonio Hernández outside Manhattan federal courthouse on Oct. 11. (AFP/Getty Images)

The US drug trial against the brother of Honduran President Juan Orlando Hernández brought the nexus between organized crime and political power to the forefront, undermining the country’s purported role as an ally in the fight against corruption and powerful drug trafficking groups.

Over the course of the two-week trial that ended with the conviction of former Honduran congressman Juan Antonio “Tony” Hernández — the president’s brother — on drug and weapons charges, little doubt remained about the importance his connections to political power and dirty members of the country’s security forces played in facilitating his network.

Still, it’s unclear if this conviction alone — especially in the wake of past convictions that in hindsight only temporarily shook up Honduras’ elite — will knock down the criminal structures firmly in place.

What’s Next for President Hernández?

In the capital Tegucigalpa, the situation has remained calm after the conviction of the president’s brother. It’s still unclear how the ruling will affect the president himself. For now, JOH, as President Hernández is known informally, is still clinging to the presidency. There don’t appear to be any signs that he’s thinking of relinquishing his power as head of state.

Shortly after becoming aware of the verdict against his brother, the president issued a statement in which he said he felt “sad,” but was quick to return to what has become his main argument: that the whole case was based on testimony from drug traffickers the Honduran government persecuted and extradited.

“What can be said about a conviction based on testimonies of confessed murderers?” he said.

This testimony, however, has fueled significant concerns about the president’s own participation in his brother’s drug conspiracy.

US prosecutors even admitted that Joaquín Guzmán Loera, the imprisoned former Sinaloa Cartel leader known as “El Chapo,” had sent $1 million to Juan Orlando Hernández via Tony. It was also made clear that the US Drug Enforcement Administration (DEA) had investigated the Honduran president for his possible participation in his brother’s network.

But not 24 hours after the verdict was read, US Chargé d’Affaires in Honduras Colleen Hoey was photographed accompanying President Hernández at a military parade. “The United States is one of the president’s main supporters here,” a diplomat who asked to remain anonymous because they were not authorized to speak publicly on the matter, told InSight Crime.

The support of Washington and the army are critical to safeguarding the president. “Everything depends on the United States, the armed forces and the economic elite,” Carlos Hernández, from the Association for a More Just Society (Asociación para una Sociedad más Justa – ASJ), told Univision.

For the army, where President Hernández ordered sudden changes for at least 10 officers after his brother’s conviction, the head of the force hastened to deny rumors about a possible coup d’etat. “The rule of law must prevail, and if someone wants to take control by force, that’s when the army will enter,” General René Orlando Ponce Fonseca, chief of the armed forces, told La Tribuna October 21.

Several of the officers — including four colonels — removed from the force, a move that was seen as a way to manage discontent within the rank and file, were allegedly opposed to the president, a military intelligence source told InSight Crime. On October 23, some of those same officers went to Honduras’ Supreme Court to file appeals.

“I think the United States prefers to stick with the president rather than a situation of chaos that’s out of their control,” according to the diplomat consulted in Tegucigalpa.

For now, President Hernández can breathe calmly while posing for photographs with US diplomats. Meanwhile, in the mountains of Honduras, organized crime continues to transform while dubious congressional reforms make it more difficult to prosecute officials accused of corruption.

The same week that Hondurans anxiously awaited the verdict in the trial against Tony Hernández, lawmakers in Congress were quietly cooking up a new recipe for impunity as the wheels of corruption continued on.

As the period allocated for Congress to ratify reforms approved months ago neared its end, lawmakers went ahead and gave them the green light. One of the more controversial measures involved changes to the country’s penal code, which will soften punishments for high impact crimes like corruption, money laundering and drug trafficking when the regulations go into effect on November 10, according to El Heraldo.

Civil society groups working to combat such criminal activity told El Heraldo that the changes will “generate greater impunity” and keep those who misappropriate public funds and state assets out of prison. Other groups have gathered thousands of signatures opposing the reforms and demanded widespread demonstrations to protest against them.

The conviction of Tony Hernández was the final piece that connected Honduras’ most notorious drug trafficking clans with the highest echelons of political power in the country.

Even before Tony Hernández emerged as a player in the western highlands of Honduras — especially in Lempira department where the Hernández brothers were born and got their start in politics — groups of family trafficking clans known as transportistas dominated the country’s main drug routes and worked with the complicity of the army, police and local political leaders to do so.

These links became clear in other high-profile cases in the United States featuring damning witness testimony, such as the trial against former Cachiros leader Devis Leonel Rivera Maradiaga, as well as Fabio Lobo, the son of former president Porfirio Lobo. Before Tony Hernández landed in US custody, these revelations culminated with the younger Lobo’s conviction and a 24-year prison sentence for cocaine trafficking.

But this most recent verdict has revealed just how much political power was behind the growth of drug trafficking in Honduras. It was a quid pro quo that benefited everyone involved. Drugs flowed freely and unobstructed through Honduras to the United States, and criminal groups “funneled millions of dollars of drug proceeds to National Party campaigns to impact Honduran presidential elections in 2009, 2013, and 2017” in return, US prosecutors said.

For years, the US government has unequivocally voiced its support for Honduras as an effective partner in the regional fight against organized crime. However, the conviction of Tony Hernández didn’t just provide further confirmation of the narco-politics link in the country, but it also served as an indictment of the United States’ role in legitimizing the political powers that facilitated such criminal activity.

Tony Hernández’s drug trafficking clan operated from at least 2004 until 2016, according to US prosecutors. In that time, the United States supported and played a key role in a 2009 coup d’état that effectively ushered in what will soon amount to more than a decade of National Party rule, which has been defined by allegations of severe misconduct.

Indeed, former President Lobo and current President Hernández — whom the United States had backed and is currently supporting — are both alleged to have close criminal ties, in addition to having allegedly accepted bribes from drug traffickers to help fund political campaigns in exchange for protection and other benefits, among other corruption allegations.

What’s more, during this time the United States has poured millions of dollars in security assistance to train and support various Honduran police and military units — including militarized police forces like the Tigres, an elite unit created specifically to fight organized crime and bring security to some of the country’s most dangerous regions.

In 2016 and 2017 alone, the US government provided more than $200 million in assistance for anti-drug measures, police and military equipment and training, as well as border security, according to data from the Washington Office on Latin America (WOLA).

Corrupt members of the Honduran police and military were central to the success of Tony Hernández’s drug trafficking.

In fact, testimony in the trial against him revealed that the former Honduran police chief, Juan Carlos “El Tigre” Bonilla Valladares, allegedly played a vital role in facilitating the former congressman’s drug ring, among other national police officers like Mauricio Hernández Pineda, the cousin of both Tony and Juan Orlando Hernández.

But even before this came to light in court, US support and assistance flowed despite El Tigre’s “dark past” and suspected links to death squads.

The United States may have convicted a few members of the narco-politics structure in place in Honduras, but it hasn’t yet answered for helping create the conditions that allowed such a structure to exist in the first place.