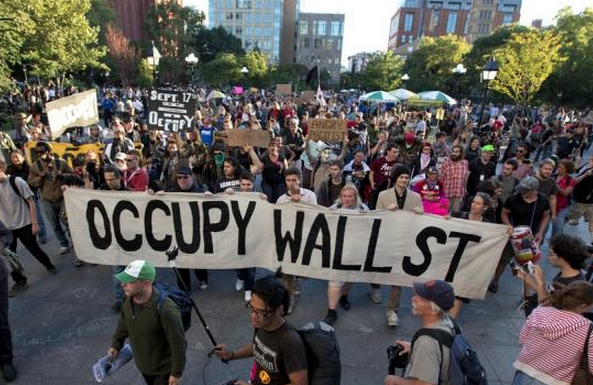 Occupy Wall Street may not have dismantled capitalism – but it did profoundly change the way people perceived it, and how their voices impact institutions of power all over the world. While the tent encampments of fall 2011 were evicted within months, Occupy didn’t die – rather, its organizers went on to build social justice movements and affect political outcomes on multiple continents.

Were it not for Occupy, Bernie Sanders may not be a frontrunner in the Democratic presidential primary. Jeremy Corbyn – a sexagenarian vegetarian socialist – wouldn’t have overcome the UK’s establishment political machine to become new Labour Party leader. And Malcolm Turnbull wouldn’t have ousted Tony Abbott as Australia’s newest prime minister.

However, on the four year anniversary of Occupy Wall Street, it’s important to reflect not only on its victories but to learn from its failures. Both were necessary, as the movements that came after Occupy built off of those victories by learning from its downfalls.

Occupy Wall Street had many goals – some of them lofty, many of them practical. In establishing themselves as the “99%”, OWS drew a clear line between the wealthiest Americans that gobbled up almost all of the income gains after the recession’s official end, and the rest of the struggling underclass.

In addition to recently pushing him to advocate for a $15 an hour minimum wage in New York, former occupiers also pressured Governor Andrew Cuomo to renew the state’s Millionaire’s Tax and ban fracking across the state.

Around the nation, Occupy’s other grievances were addressed with specific policy victories:

Lt. John Pike, the UC Davis police officer who pepper-sprayed a group of seated protesters, was suspended and his superior officer was removed from command before the university paid out $1 million to the students and professors who were pepper-sprayed. The Los Angeles City Council recently agreed to award Occupy protesters with a $2.45 million settlement as a result of the LAPD’s violent eviction of their encampment. Police everywhere are now under more pressure to handle protesters with dignity and respect, as their actions are costing taxpayers millions.

What the media – and, quite frankly, many occupiers – got wrong about Occupy Wall Street was that it was a movement based on the sole tactic of physical occupation of public spaces. Too often, the focus was drawn away from the issues Occupy was confronting, like income inequality, global capitalism, and the police state, in favor of mundane day-to-day issues like who would be able to solicit food donations, who was available to maintain night watch over the park, and the time-consuming, ineffective General Assembly process.

At Occupy Houston, where I spent most of my time between fall 2011 and spring 2012, organizers from Spain’s Indignados movement conducted a Q&A session with some of our organizers during the first week of the occupation. One specific instruction they gave was to not become dependent on the occupations themselves, but to voluntarily disassemble the camps after two weeks of occupation. They told us that any occupation lasting longer than two weeks would make the media’s coverage turn from talking about our protests of inequality and injustice to the minutiae of maintaining a permanent encampment.

We didn’t listen, and sure enough, the Indignados were right. After the first initial wave of excitement, it seemed as if a majority of the occupiers had left the encampments, uninterested in maintaining a permanent hold. Those who remained were mostly white males with little interest in making the movement more inclusive to women and people of color, alienating large segments of the population that the movement needed to attract to make any lasting change. Attempts to address Occupy’s unintentional reinforcement of white supremacy or misogyny were quickly shushed by mostly white and male General Assembly facilitators. I’ll reluctantly admit I was one of those white males of Occupy who was too proud to address the movement’s fundamental flaws in outreach.

Occupy became a bubble in which the few who remained looked upon those who wanted to move beyond the camps with disdain; likewise, occupiers who came to General Assemblies to stir up interest in organizing direct actions grew frustrated with the self-absorbed GA process of talking for hours, waving fingers, and getting nothing done. The conflict that had once been between the 99 percent and the elite turned into a rift between campers and protesters. But in all the ways OWS failed, the movements that it spawned learned from those mistakes and adapted.

How Occupy Lives On

The eviction from the encampments was one of the best things to happen to the Occupy movement, as it forced us to remove ourselves from the bubble we had created and take our organizing into our communities. The movements that followed Occupy started from the precedent it set, using tactics that went beyond simply picketing and marching. Occupy became known to a national audience whose consciousness has expanded since the protests that engulfed the country in 2011. It could be argued the public is growing more tolerant of popular movements that use militant nonviolence to get their point across.

Coalitions that formed between unions and occupiers allowed the Fight For $15 movement to sweep the nation, resulting in fast food and retail workers striking in as many as 236 cities, shutting down many restaurants and stores, and winning tangible legislative victories. The Black Lives Matter movement that began with Trayvon Martin’s death and exploded after the killing of Michael Brown brought on a wave of large scale protests and nationwide highway shutdowns not seen since Occupy organized a similar campaign in 2011. In 2013, thousands of middle school and high school students in Philadelphia protested education cuts by shutting down all of their schools in a citywide walkout. Last year, 400,000 people took over New York City to demand action on climate change. And days later, over 1,000 people shut down New York’s financial district to protest Wall Street’s involvement in funding climate change.

It’s more evident now than ever before that protests have become more energized after Occupy set a new bar for protesting. And as seen in the numerous policy victories listed above, protest works. Occupy isn’t dead – it just moved on, as movements tend to do. The next mass cultural awakening will almost certainly borrow tactics and messaging from Occupy Wall Street, and so will the one after that.