Above Photo: A NATURAL GAS WELL DRILLED BY ANADARKO PETROLEUM IS LOCATED NEAR MIFFLIN TOWNSHIP, PENNSYLVANIA. THE WELL FEEDS GAS INTO A NEARBY PIPELINE THAT TRANSPORTS GAS TO POWER PLANTS. CREDIT: ROBERT NICKELSBERG/GETTY IMAGES

The construction of new natural gas-fired power plants in Pennsylvania is disproportionately harming lower-income populations in rural parts of the state, while communities of color are substantially more likely to live near existing gas-powered plants in the state, according to a new report.

Released Wednesday by Food & Water Watch, a Washington, D.C.-based environmental advocacy group, the report paints an alarming picture of what the dramatic growth in natural gas production in Pennsylvania means for disadvantaged communities, both urban and rural, that are more likely than ever to host the industry’s rapid expansion of drilling and power plants in the state.

Pennsylvania’s most rural areas – census tracts with fewer than 285 people per square mile — make up only 22 percent of Pennsylvania but represent 44.2 percent of the areas covered by proposed fossil fuel plants. Many of these proposed plants are being sited near drilling areas of Pennsylvania where natural resource development is linked to “a history of marginalization, extraction-related health issues, and a cycle of poverty,” the report says.

For the report, Food & Water Watch studied the location of Pennsylvania’s 136 existing, new, and proposed fossil fuel-fired power plants. In its research, the group found that proposed gas plants “would only reinforce the environmental injustice of siting polluting power plants in more marginalized communities, including rural areas.”

The group said its study, “Pernicious Placement of Pennsylvania Power Plants,” is the first to look at the gas-fired power plant building boom, the first to take an in-depth look at power plants siting in a particular state, and one of the few to examine the cumulative effects of living near multiple power plants. 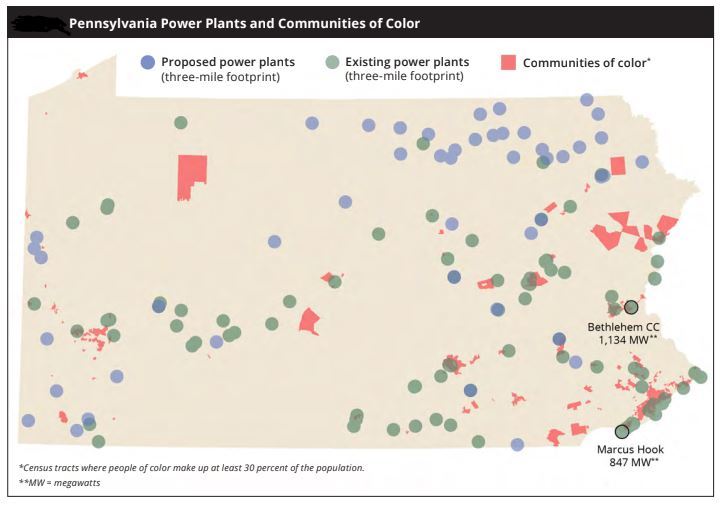 More than a decade ago, Pennsylvania became “ground zero” for the shale gas production boom, making industry and state officials more open to the idea of building new natural gas-fired power plants in areas of the state with significant hydraulic fracturing, or fracking, operations.

“In looking at a state that epitomizes the gas fracking boom in America, what we found was truly startling: a doubling-down of the gravest environmental and public health threats from fossil fuels being levied on communities of color and lower-income areas that have borne the brunt of these hazards for generations,” Wenonah Hauter, executive director of Food & Water Watch, said Wednesday in a statement.

The state has the potential, Food & Water Watch contends in the report, to generate enough power from solar, wind, and geothermal energy to replace its fossil fuel-powered plants. Pennsylvania must make this shift to renewable energy “to prevent climate catastrophe and to start delivering environmental justice to disadvantaged communities,” the report states.

Along with the environmental and public health impacts on Pennsylvanians, Food & Water Watch found that existing power plants in the state have not delivered economic prosperity to the surrounding region as promised by the plants’ supporters. The report notes that areas near power plants have higher concentrations of lower-income households and higher poverty and unemployment rates.

Pennsylvania also has failed to involve the affected communities in the decision-making process of siting and permitting new power plants Food & Water Watch claims. The state’s approval of the proposed natural gas plants “appears to short-circuit the environmental justice principles of equity, transparency, including and community empowerment,” the report says.

In rural areas, natural gas development has turned areas of Pennsylvania into “energy sacrifice zones” where companies reap big financial benefits from the natural gas extraction but the community bears the environmental burden, according to the report.

A recent study released by Marywood University in Scranton, Pennsylvania showed free and reduced school lunch enrollment is higher in counties with large amounts of shale gas drilling compared to counties without it. The Marywood University study concluded that the natural gas industry did not help lower the number of students eligible for the National School Lunch Program.

Meanwhile, some of the largest proposed plants overlap areas of economic stress such as the 1,500-megawatt Lackawanna Energy Center that is under construction in Jessup, Pennsylvania. The plant partially overlaps an area of “economic stress” and has drawn broad-based community opposition over pollution and whether the plant would benefit the local community.

Food & Water Watch recommends in the report that the Pennsylvania Department of Environmental Protection publish on its website an annual report on the impact that all natural gas infrastructure — from the wellhead to power plants to export terminals — has on communities of color and lower-income and economically stressed communities. The definition of environmental justice areas should be expanded beyond race and poverty alone, it says, to account for lower-income and economically stressed areas as well as raising the poverty threshold for consideration.

Since 2011, companies have constructed or planned to build 48 new gas-fired power plants, according to the report. The surge in power plant construction locks in reliance on fossil fuels, encourages more environmentally damaging fracking, and amplifies environmental injustice, the report says.

Pennsylvania exports electricity to other states because it makes more than it uses. Only Texas has more planned gas-fired generation in the queue, according to U.S. Energy Information Administration data.

Among the 41 operating gas-fired plants in Pennsylvania, African American residents are represented in the area around the plants more than twice as much as they would be if these power plants were equitably distributed. The situation is the opposite with the state’s 30 operating coal power plants, with white residents over-represented. For the state’s smaller oil-fired power plants, African American residents are extremely over-represented in their proximity to the plants, according to the report.

Mike Ewall, founder and director of Energy Justice Network, a national support network for grassroots community groups fighting dirty energy and waste industry facilities, said the Food & Water Watch report echoes what his group has noticed in its work against power plants. “The more white and wealthy areas were able to fight off proposals, but the more urban and lower-income ones didn’t even manage to form opposition groups,” Ewall told ThinkProgress.

For power plants in Pennsylvania, household income is lowest closest to the plant and steadily rises as residents get further away. Household income in the state finally hits the national average once the residence is about 10 miles from a coal, oil, or gas plant, Ewall said.

“Many new groups formed to fight off the proposals, and we helped that process,” Ewall said. “What we noticed is echoed in the [Food & Water Watch] report — that the more white and wealthy areas were able to fight off proposals, but the more urban and lower-income ones didn’t even manage to form opposition groups.”