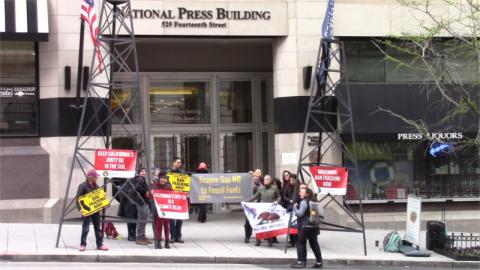 On the 17th of April, California’s governor Jerry Brown appeared at the National Press Club. To get in, he had to pass protesters demanding he cut his ties to California’s oil and gas industy and ban fracking in his state. The oil industry has CA in their sights for the next big North Dakota style oil fracking boom.

The demand of the protest was simple: that Jerry Brown Halt New Oil & Gas Projects and especially fracking in his state. His big, gas-guzzling SUV had to drive right past protesters and their banners to get into the National Press Club, where no doubt the stench of oil industry corruption lingered long after he left.

A speaker at the rally reported that in 13 CA residents lives within a mile of an oil or gas well, and that communities of color are disproportionately effected by this. That too fits the timeworn pattern from North Dakota, where oil fracking and associated “man camps” have done great harm to Indigenous communities.