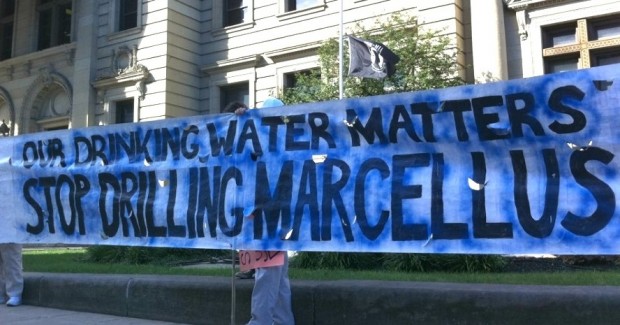 Fracking Is Threatening Our Families, Pets And Food

Fracking chemicals are known carcinogens, endocrine disruptors or other classes of toxins; Studies have uncovered serious adverse effects including respiratory, reproductive, and growth-related problems in animals and a spectrum of symptoms in humans that they term “shale gas syndrome”

The first researchers to systematically document ill health in livestock, pets, and people living near fracking drill sites were Michelle Bamberger and Robert Oswald. Bamberger, a veterinarian, and Oswald, a professor of molecular medicine at Cornell University, used a case study approach–looking at individual households–to search for possible effects (Bamberger and Oswald 2012).

Many fracking chemicals are known carcinogens, endocrine disruptors or other classes of toxins (Colborn et al. 2011). Bamberger and Oswald’s studies, carried out during the ongoing fracking boom, uncovered serious adverse effects including respiratory, reproductive, and growth-related problems in animals and a spectrum of symptoms in humans that they termed “shale gas syndrome”. Ultimately, their research led them to consider fracking’s broader implications for farming and the food system (Bamberger and Oswald 2012 and 2014).

Their new book, The Real Cost of Fracking: How America’s Shale Gas Boom Is Threatening Our Families, Pets, and Food describes the results of this research. However, it is by showing the pervasiveness of fracking’s harmful effects on the lives of the householders that Bamberger and Oswald best convey its true costs.

Why Animals?
The strategy of including animals in their research was based on the supposition that the shorter lifecycles and higher exposure of animals to contaminants makes them “early warning systems” for environmental hazards (Reif 2011, Rabinowitz et al. 2010, Van der Schalie et al. 1999). Further, since these were often food animals, exposed or sickened animals could directly become human food system hazards.

The Real Cost of Fracking describes clearly these findings. However, the book is organized around the firsthand experiences of the animals and people behind seven of these case studies. These experiences include the loss of calves and the imposition of a herd quarantine due to a wastewater spill, bulls and Newfoundland dogs with ongoing reproductive problems, and horses on steroids due to respiratory problems. The authors meet children with elevated arsenic levels, adults experiencing dramatic weight loss, and whole families suffering from “shale gas syndrome” (their name for the combination of burning eyes, sore throat, headaches, nosebleeds, vomiting, diarrhea, and skin rashes often experienced by the people in their case studies). Some residents cannot enter their homes without becoming seriously ill and others have lost their animal breeding or farming-based livelihoods.

During their research, Bamberger and Oswald also hear how government indifference and industry tactics compound people’s health and financial problems. These tactics include secrecy about fracking chemicals, which hinders effective medical treatment (McDermott-Levy et al. 2003). Others include harassment and intimidation of residents who complain.

Obstacles to Scientific Research and “Proof of Harm”
While telling these stories, Bamberger and Oswald describe the complexities of carrying out research on active industrial sites operated by a secretive industry. Non-disclosure agreements, for example, hide potentially useful data. Whenever fracking victims are financially compensated for their losses, they often are forced to sign such agreements, preventing them from revealing fracking-related illnesses or other losses to the public.

Ideally, as proof of harm, researchers would be able to link specific chemicals to specific health symptoms.  This would require chemical testing to prove that a chemical was absent before fracking started and present afterwards. Researchers would then need to establish a probable exposure route (i.e. drinking water contaminated with the chemical). And finally, independent health monitoring would confirm that signs of illness were absent before chemical exposure and present after.

In addition to non-disclosure agreements, The Real Cost of Fracking highlights several further barriers to establishing such links. First there is no provision for systematic chemical testing of air, soil, or water on drill sites and their surroundings.  Nor is there systematic health monitoring of any kind. Furthermore, without full disclosure of the chemicals used at each specific drill site, researchers, veterinarians, and doctors can’t know for sure which chemicals or health effects to test for.

The systematic large-scale health and environmental testing needed can only be carried out with the support of government and regulators. To serve the public interest, it must be carried out by a trustworthy source and the results made freely available. Perversely, having failed to require any such tests, government officials and regulators join with industry to claim there is no “proof of harm” from fracking.

Fracking Correlated with Ill Health
Despite these obstacles, Bamberger and Oswald’s results showed local residents experienced new and serious harm to their health, wellbeing, and livelihoods after fracking began. They were able to document that “animals and humans have symptoms that correlate in time with gas and oil drilling operations.” In many cases they could also identify likely exposure routes to fracking toxins. Well water is one possible route, and the authors note research by Osborn et al. (2011) that found “water wells in areas near shale gas operations have been contaminated by methane that has the isotopic signature of shale gas.” These results suggest that, in addition to methane released by fracking, other more toxic chemicals could contaminate wells.

Strengthening the correlation between fracking and ill health, Bamberger and Oswald found health clinics in Pennsylvania and Colorado that reported patients living near drill sites who also experienced “shale gas syndrome.” Furthermore, since the publication of their results, other researchers have reported adverse health correlated with fracking (Bamberger and Oswald 2014b; Macey et al. 2014; McDermott-Levy et al. 2013; Hill 2013; Food and Water Watch Report 2013). However, it is likely these studies do not identify all of fracking’s harmful effects. In particular, the animal reproductive problems documented by Bamberger and Oswald suggest that people living and working near drill sites also need testing for reproductive and other long-term health effects.

Farmland, Food and Fracking
Bamberger and Oswald excel at conveying the harmful effects of fracking on local residents. However, synthesis of their data with that of other researchers leads them to a much wider concern. Their analysis suggests widespread fracking will have a major negative impact on farming and food quality in the U.S., and perhaps worldwide.

Fracking operations are often located on or near farms. Thus pasture, cropland, streams, ponds, and wells are all at risk of contamination by toxins used or released during fracking. It is known that leaks and spills can occur during well drilling, high pressure hydraulic fracturing, or waste transportation. Exposure routes also include leaky well casings and intentional farmland waste storage or disposal. Animals can drink contaminated water and graze contaminated pasture. Crops can be grown on contaminated soil. Furthermore, poor air quality can impact animal health. Air quality is impaired by the increased road traffic, open wastewater lagoons, chemicals released during intentional gas flaring, and ongoing presence of benzene at drill sites.

These food system threats are compounded by the pooling of products in the current industrial food system and the lack of appropriate testing and regulation of the food supply. In addition, financial pressures encourage farmers to let sick animals enter the food system. Because it impacts crops and livestock through land, air, and water, Bamberger and Oswald emphasize fracking has implications for both industrial agriculture and small-scale farming.

A Powerful Warning
Michelle Bamberger and Robert Oswald join other important scientist-authors who felt compelled to speak directly to the public. Their book, like Rachel Carson’s Silent Spring, Sandra Steingraber’sLiving Downstream: An Ecologist’s Personal Investigation of Cancer and the Environment, and T. Colin Campbell’s The China Study, warns about an entirely preventable health and environmental crisis that is being ignored, or concealed, by those in power. Such books have a special value, due in part to the quality of their writing and in part to the authority and integrity of the authors and the depth of their knowledge.

As new research documents the fracking boom’s contribution to global climate change, it has become clear fracking’s climate impact is much greater than originally claimed (Howarth 2014; Schneising et al. 2014). Now, with The Real Cost of Fracking, Bamberger and Oswald give voice to those whose lives and health suffer already under that boom – and offer a forewarning to the rest of us.

Bamberger M. and R.E. Oswald (2014b) “The Shale Gas Revolution from the Viewpoint of a Former Industry Insider.” New Solutions: A Journal of Environmental and Occupational Health Policy 1.1:1-16.