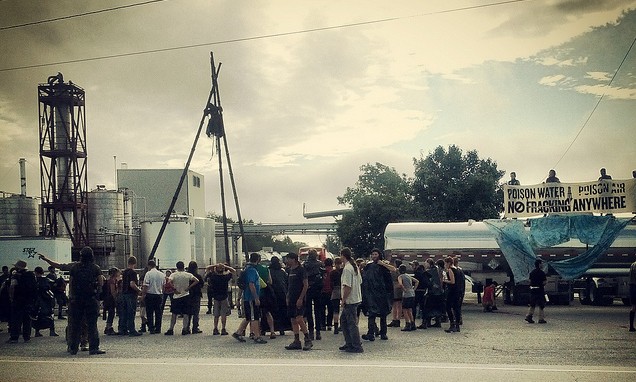 Fracking Not The Panacea Advertised By Industry

Above: Protest and blockade against hydro-fracking.

Fracking Boom Slouching Toward Bust: Environmental and Health Problems Become Too Serious To Ignore Resulting in Hundreds of Local Groups Forming to Oppose Fracking and Fracking Not Producing As Much Oil or as Much Profits As Expected

Stop me if you’ve heard this one. What’s an obscenity that starts with “f” and ends with “ck”?

Oh wait, sorry, this is supposed to be a serious article about fracking. That’s right, we’re talking about The Biggest Development in the energy world since the birth of the sun, the Revolution that is freeing America forever from bondage to oil imports.

But here’s the thing: though this revolution is only a few years old, it’s already losing steam. There are two big reasons why.

The first has to do with environmental problems that can’t be swept under the carpet any longer. The image of a homeowner lighting his tap water on fire in Josh Fox’s documentary film “Gasland” has become a cliché; still, for a while the industry was successfully able to argue that adverse impacts from fracking to water, air, soil, wildlife, livestock, and human health are negligible. Industry-funded studies declared the practice safe, and the EPA appeared to back them up.

Drilling companies tended to target economically depressed regions, where poverty forced most townsfolk to take whatever short-term jobs and production royalties were offered, while stuffing their concerns about nosebleeds, headaches, dying pets, intolerable noise, and tainted water. Meanwhile, citizens who suffered the worst health effects or property damage were led to sign non-disclosure agreements in order to receive settlement payoffs (including two children ages 7 and 10 who have been given lifetime bans from speaking about fracking), thus keeping their plight out of public view.

Meanwhile Los Angeles Times has uncovered documents showing that the EPA has systematically ignored evidence of environmental harms from fracking, choosing not to publicize or act on data collected by its own staff.

A few years ago fracking for shale gas or tight oil was still novel and confined to small regions, but now tens of thousands of wells have been drilled and millions of Americans have personal experience with the noise, truck traffic, fumes, and local political turmoil that seem inevitably to follow in fracking’s wake. Hundreds of anti-fracking citizen groups have formed, public sentiment is turning, and communities have begun seeking bans or moratoria on the practice. The industry is on the defensive: Wayne County, PA activists are currently celebrating the cancellation of 1500 drilling leases covering 100,000 acres of land.

Americans are being subjected to a massive PR assault attempting to persuade them that shale gas and tight oil have brightened America’s energy future. The problem? It’s simply not true.

New York State’s moratorium on fracking remains in effect, despite massive industry efforts to end it. Meanwhile the Colorado city of Longmont has voted to ban fracking altogether, and the State of Coloradois suing the city.

Fracking’s second problem is actually a bigger one, though less publicized: its production potential was over-sold. Everyone who pays attention to energy issues has heard that America has a hundred years or more of natural gas thanks to the application of fracking to shale reservoirs, and that the US is on track to out-produce Saudi Arabia now that oil is flowing from fracked fields in North Dakota and Texas. To most, the news at first sounded hopeful and reassuring. Yet as actual production numbers accumulate, it appears that claims made for fracking were simply too good to be true.

It turns out there are only a few “plays” or geological formations in the US from which shale gas is being produced; in virtually all of them, except the Marcellus (in Pennsylvania and West Virginia), production rates are already either in plateau or decline.

Why so soon? A major challenge bedeviling drillers is the high variability within shale plays. Each tight oil or shale gas-bearing geologic formation tends to be characterized by a small core area (usually a few counties) where production is profitable and plentiful, surrounded by a much larger region where per-well production rates are lower to start with and drop fast—often falling 60 percent during the first year. Given the expense of horizontal drilling and fracking, it’s hard to make money in non-core areas unless oil and gas prices are stratospheric. As the “sweet spots” get drilled to capacity, producers are being forced to the fringes, taking on more debt because sales of product don’t cover operating expenses.

With decline rates so high, promised production volumes are turning out to be so much hype. America’s hundred years of natural gas, heralded by President Obama as a national energy game-changer, actually amounts to a mere 24 years by official estimates, even less according to unofficial but well-informed calculations.

Oil analyst Rune Likvern says shale gas and tight oil suffer from the “Red Queen” syndrome, citing a character in Lewis Carroll’s Through the Looking Glass. In the story, the fictional Red Queen jogs along at top speed but never gets anywhere; as she tells Alice, “It takes all the running you can do, to keep in the same place.” Similarly, with worsening well decline rates, it will soon take all the drilling the industry can do just to keep production steady; then, as all the best drilling sites are exhausted, the Red Queen will start falling behind. Before 2020, shale gas and tight oil production will top out and start to decline. Americans will wonder what happened to the lavish economic benefits the industry promised.

Recently Shell took a $2 billion write-down on its liquids-rich shale assets in North America. While no details were released, it’s likely the company was simply acknowledging the unprofitability of leases in non-core regions, purchased back when shale plays were being advertised as “manufacturing operations” in which companies could successfully sink a drill bit virtually anywhere.

The oil industry itself is starting to learn that the shale revolution just ain’t all it was fracked up to be.

Despite continuing profits, the oil-and-gas industry as a whole appears to have entered its sunset years. Major oil companies have seen production decline by over 25% in the last decade. Both the number of wells drilled and the amount of inflation-adjusted capital invested in exploration and production have doubled, with negligible results. Raymond Pierrehumbert, Professor of Geophysical Sciences at the University of Chicago, recently summarized the situation with crystalline brevity: “Oil production technology is giving us ever more expensive oil with ever-diminishing returns for the ever-increasing effort that needs to be invested.”

Which brings us to the bottom line. Americans are being subjected to a massive PR assault attempting to persuade them that shale gas and tight oil have brightened America’s energy future. What has really changed is the nation’s energy conversation: until recently, it was about how we should reduce our dependency on depleting, climate-changing fossil fuels. Now our “conversation” has become a one-sided harangue about the energy, jobs, and tax revenues the industry insists will flow from fracking from now ’til kingdom come, and how these outweigh environmental concerns.

The data do not support these claims. Therefore it is critically important that we return America’s energy focus to the most critical imperative of our time—the necessary and inevitable transition away from our current dependence on fossil fuels.

This work is licensed under a Creative Commons Attribution-Share Alike 3.0 License

Richard Heinberg is a senior fellow at the Post Carbon Institute and the author of eleven books, most recently Snake Oil: How Fracking’s False Promise of Plenty Imperils Our Future. Previous books include The Party’s Over: Oil, War, and the Fate of Industrial Societies, Peak Everything: Waking Up to the Century of Declines, and The End of Growth: Adapting to Our New Economic Reality.