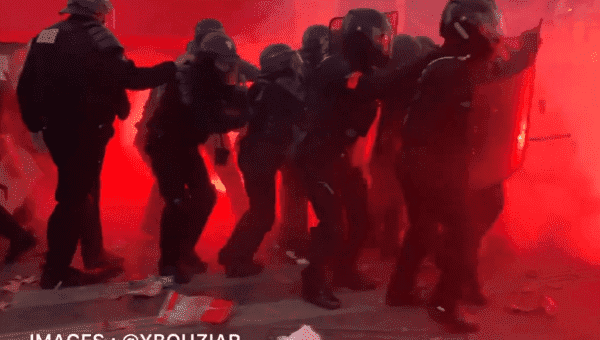 The organizers of the protests warn that the security bill is an attack on the most fundamental freedoms.

France has protested against the bill on security promoted by the government of Emmanuel Macron into the night on Saturday. The organizers of the protests warn that the security bill approved last week by the National Assembly is an attack on freedom of expression and fundamental public freedoms.

“This bill aims to restrict the freedom of the press, the freedom to inform and be informed, the freedom of expression, in short, the fundamental public freedoms of our Republic,” stated the coordinators who called the protests.

The coordinators of the demonstrations demand the elimination of articles 21, 22 and 24 of the bill and the “withdrawal of the new national scheme for maintaining order” published in September.

Just like in 2019, today the people of France are in the streets at war with the French state and nobody cares because Macron's dumpster fire government gets classified as a democracy, even as it imposes undemocratic security measures. https://t.co/euieV4vy1N

Article 24 of the security bill gives one year in jail and up to 45,000 euros of fine in punishment for the dissemination of images of the forces of order.

Demonstrators maintain that many cases of police violence would go unpunished if they had not been recorded by journalists on cameras or on cell phones of citizens.

Two cases of police violence this week have ignited the debate transforming a political decision into a real crisis for the executive of Emmanuel Macron.

On Monday, the police brutally evacuated hundreds of migrants from a central Paris square, and beat journalists covering the police operation.

Thousands in France are protesting the proposed security law which contains a provision making it a crime share images of police officers on duty. What do cops have to hide? pic.twitter.com/h91BH6AbZ4