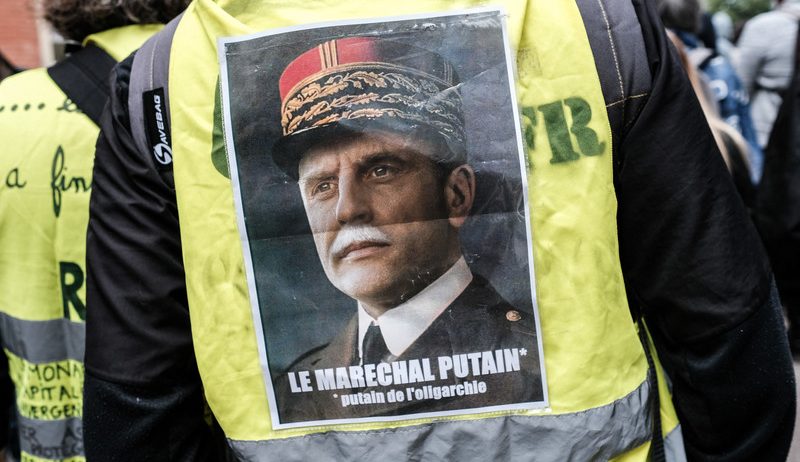 Above photo: A protester in Toulouse wears a poster depicting President Emmanuel Macron as Marshal Pétain, the Nazi collaborator who headed France’s World War II puppet regime, May 2019. Thousands of people in France are convicted each year for the vaguely defined offense of “contempt of public officials.” Patrick Batard/ABACA.

France – The government of President Emmanuel Macron is defying a landmark judgment from the European Court of Human Rights that protects the right of people to call for a boycott of Israeli products.

This comes amid a mounting human rights crisis in France, where the government is waging a violent crackdown on dissent and protest, and escalating its repression of the country’s Muslim population.

The European court’s unanimous decision in June struck a major blow against Israel’s efforts to silence its critics when it overturned the criminal convictions against 11 Palestinian rights activists in France.

The court found that the convictions against the activists for calling on shoppers to boycott Israeli goods violated the European Convention on Human Rights’ guarantee of freedom of expression.

It ordered the French government to pay each of the activists about $8,000 in damages and awarded them their legal costs.

According to two experts on French law, the European court’s ruling should have prompted the French government to rescind its instructions to prosecutors first issued in 2010 that they should aggressively pursue supporters of the boycott, divestment and sanctions (BDS) movement for Palestinian rights.

Yet far from respecting the precedent-setting decision – and the political rights of French citizens – the Macron government’s justice ministry issued a memorandum to prosecutors last month telling them to continue investigating activists who call for boycotts of Israel.

The memorandum asserts that actions “calling for a boycott of Israeli products” may still constitute a crime under the country’s press law by “provoking public discrimination towards a person or group of persons due to their membership of a nation.”

According to the legal experts – Magistrate Ghislain Poissonnier and law professor Nicolas Boeglin – the new memorandum is “obviously seeking to preserve the French-style penalization of boycott calls.”

“It is clear that the French authorities refuse, in violation of the hierarchy of norms, to submit to the decision of the [European Court of Human Rights] and to European law,” they add.

They say that the French justice ministry is trying to side-step the clear distinction in the European court’s ruling between, on the one hand, calls to “refrain from consuming products to challenge the policy of a state,” and on the other hand, “calls for violence against people” or “racist and anti-Semitic remarks targeting Jews as an ethnic-religious collective.”

The French government is attempting to maintain “vagueness about the distinction between the call for a boycott of Israeli products and anti-Semitism, without clearly specifying what could tip one towards the other,” Poissonnier and Boeglin observe.

At the same time, the justice ministry memorandum incites prosecutors to subject political activists to a terrifying level of inquisition and scrutiny: It claims that “the anti-Semitic character of a boycott call could result directly from words, gestures and writings of the accused” and can also be “deduced from the context of these.”

The justice ministry “fails to conceal its clearly political goal to suppress at all costs the calls for boycotting Israeli products launched in the framework of the boycott, divestment and sanctions movement,” Poissonnier and Boeglin conclude.

While France has long waged a campaign of repression targeting supporters of Palestinian rights, the Macron government’s authoritarian crackdown is expanding to almost any form of dissent.

The French government’s violence against its own people highlights one of its many shared values with Israel.

In September, the Committee to Protect Journalists said that “France and Israel stand out for use of dangerous ammunition” used to attack protesters and the journalists covering them.

The irony is that Macron claims to be a champion of free speech, insisting that displaying the infamous cartoons dehumanizing and denigrating the beliefs of Muslims is not only permissible but necessary to demonstrate this commitment to liberty.

Macron is, in fact, waging a war on Muslim citizens of France, using free speech as a cover for the French state’s animus towards Muslims and the racist scapegoating of this population for terrorism.

Last week, Amnesty International published a statement titled, “France is not the free-speech champion it says it is” – an understatement if ever there was one.

“Thousands of people are convicted every year for ‘contempt of public officials,’ a vaguely defined criminal offense that law enforcement and judicial authorities have applied in massive numbers to silence peaceful dissent,” Amnesty states.

This included, in 2019, the conviction of two men “after they burnt an effigy depicting President Macron during a peaceful protest.”

In another alarming incident mentioned by Amnesty, “French police interviewed four 10-year-old children for hours on suspicion of ‘apology of terrorism’” after they apparently questioned the choice of murdered French teacher Samuel Paty to display cartoons that denigrate the Prophet Muhammad.

In France 4 children were taken from their homes and terrorized by Police. They were questioned regarding the cartoons that insult their religion.Where does this fit wrt human rights or freedom of expression? Oh! May be Muslims don’t count! #Orientalism101 https://t.co/YKyRCHXly3

Meanwhile, the French government is using the outrage about recent violent attacks as a pretext to close down Muslim civil society and civil rights groups based on vague political charges that they are promoting “separatism.”

While Muslims are a key target of the crackdown, the Macron government has been trying to stamp out protest and dissent against its domestic policies from the Yellow Vest movement and climate activists.

“Thousands of peaceful protesters have been swept up in France’s draconian crackdown on demonstrations, which has seen the authorities misuse the law to fine, arbitrarily arrest and prosecute people who have committed no violence,” an Amnesty report published in September found.

In 2018 and 2019, more than 40,000 people, including protesters, were convicted based on vague laws for activities that “should not constitute a criminal offense,” according to Amnesty.

Macron’s feats would rouse the envy of any “dictatorship” that Western governments tell us we should revile, while falsely painting themselves as champions of freedom and human rights.