‘What We Want Is Its Withdrawal!’

This morning, 9 December, the record for traffic jams on the Île-de-France [1] road network was broken. The images of those 600-plus kilometres of roads blocked with traffic, and of travellers crammed together on train platforms or not even able to push their way into Metro stations demonstrate the depth of the rejection, the depth of the strike action that began on 5 December.

The governing power is destabilised. [Prime Minister] Edouard Philippe’s speech last Friday evening can be summarised as follows: reconsidering a points-based pension system is out of the question, but the timeframe is up for discussion. This is a corny joke, like the one about the condemned man at his hanging being invited to decide on the length of the rope.

The government is taking its last shot. [High Commissioner for pension reform] Delevoye is so discredited at this point – by the rejection of his plan and also by today’s revelations about his links to private insurance companies – that the secretaries general of the CGT and Force Ouvriere have decided not to respond to the invitation to meet him this afternoon.

On 11 December, it will be the Prime Minister’s turn to present the version – definitive, we are told – of his draft law. As one RATP [2] trade union delegate put it: “He can announce whatever he wants, we aren’t even listening to him; what we want is [the draft law’s] withdrawal.”

All the workers share this view: “What we want is its withdrawal.” They will say so forcefully, once again, on 10 December.

Then what? If the government does not announce the withdrawal of its document on Wednesday evening, should we go back to leapfrog days of action? The workers know that this tactic is a guaranteed dead-end, and this is why they reject it. Therefore, it is the question of a general strike that will come onto the agenda, called and built on a united basis, from top to bottom and from the bottom to the top. At the bottom, the workers have shown that they are ready for it.

[1] The Île-de-France is the most populous of the 18 regions of France, made up of eight administrative départements, and is often called the Paris Region because it includes the city of Paris. [2] The Paris region transport network. 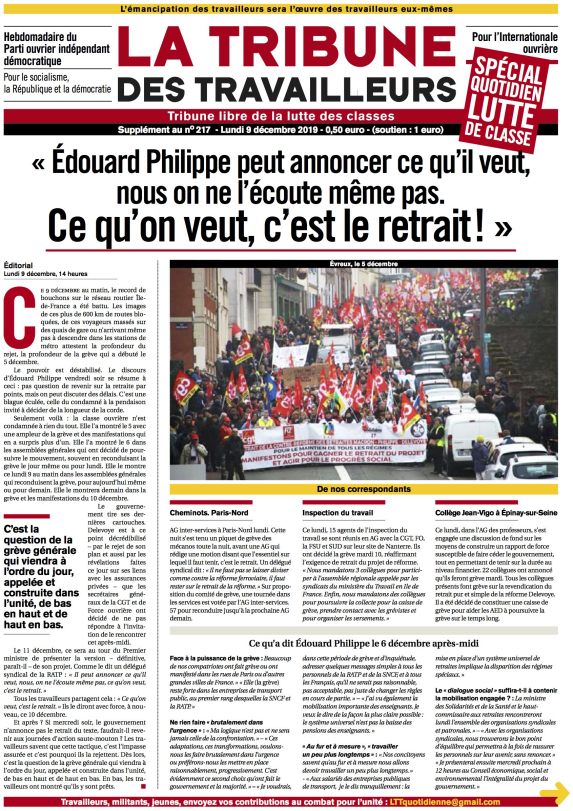 cover page of the Dec. 9 Daily Supplement to Workers Tribune

Dec. 6 Motion by the Workers of the Paris-Nord Station

[Note: Motions like this one below are being adopted by workers at workplaces across France.]

We, the interservice general assembly of Paris-Nord, meeting on 6 December, confirm our decision: the strike goes on!

Yesterday, throughout France, millions of us were on strike and demonstrating against the Macron-Delevoye draft law to reform the pensions system. The strike on 5 December is already historic due to the scale and scope of its mobilisation.

The unity of the striking Paris-Nord railworkers with their trade union organisations is welded together in the strike committee that has been elected and mandated to organise strike action. Seventeen delegates have been appointed for this purpose, with all of the trade unions – Force Ouvriere, SUD, CGT, UNSA – present in the committee.

We are convinced that when the workers take matters into their own hands and themselves organise the fight, the government will have no other choice but to retreat.

Yes, a total all-out strike is the path to victory. The slogans of the Paris-Nord general assembly are clear:

(Passed by 26 votes in favour with 6 abstentions, at noon on 6 December.)