Above Photo: Protesters rally in downtown Paris, France, Jan. 27, 2019. A counter-yellow vest demonstration is organized by groups calling themselves the “red scarves” and “blue vests” to protest the “violence.” Kamil Zihnioglu | AP

NOTE: The Macron government has tried everything to curtail the Yellow Vest protests including brutal and militaristic police tactics and mass arrests, giving in to some of the demands of the protest movement and starting a ‘national dialogue’ to try and channel people’s anger. None of it has worked. Now they are trying another tactic – a fake protest movement criticizing the Yellow Vests and supporting Macron. They have replaced the Yellow Vest with the Red Scarf.

As the article below explains, the made-for-the-media faux protest movement is designed to undermine the Yellow Vest movement. None of the other tactics have worked and I doubt this will either. The movement has put important issues on the agenda, challenging Macron’s neoliberal policies and the unfair economy.

Those issues will remain and grow. The Yellow Vest movement will morph and deepen. They are on their way to becoming a mass transformative movement. The power structure in France is desperate to stop them but the only way to do so will be the transformation of the economy and democracy in France.

Listen to our recent Clearing the FOG episode on the Yellow Vest movement.  – KZ

The pressure will now grow to disperse the Yellow Vest movement while also attempting to use the Red Scarves to manufacture support for draconian government policies and police crackdowns aimed at finally ending the establishment-threatening protests.

PARIS — As the “Yellow Vest,” or Gilet Jaunes, protest in France continues to perplex and concern the French government and European elites, a new “counter-protest” has emerged in response to the popular protest movement now entering its 12th week.

Protesters branding themselves as the “Red Scarves,” or Foulards Rouge, descended on Paris this past Sunday in order to protest the “violence” of some Gilet Jaunes protesters and a desire to see the country return to “normalcy.” The French government, which has sought to weaken and disperse the Yellow Vests movement since its inception, stated that the Red Scarves numbered around 10,500 in Paris, while other reports claimed that the demonstration was significantly smaller than the government-supplied figure.

The group has been described as “diverse” — much like the Yellow Vests, who have drawn support from across the French political spectrum — and “apolitical,” as its leadership have stated that the Red Scarves are not necessarily supportive of French President Emmanuel Macron, whose ouster is being sought by Yellow Vests demonstrators. Some participants who were interviewed on Sunday stated that they were not protesting against the Yellow Vests but instead in favor of protecting the integrity of France’s political institutions. This has led the Red Scarves themselves, as well as subsequent media reports, to portray the group as representing France’s “silent majority” that – until now – had refrained from demonstrating.

According to reports from mainstream outlets, the Red Scarves movement – which was joined by another pro-government counter-protest group, the “Blue Vests” — was a direct response to violence from some members of the large Yellow Vests protest movement that has resulted in the destruction of property and clashes with police. Yellow Vest organizers have disavowed the use of violence and have blamed “black bloc” groups for using the movement as a pretext for committing violent acts.

Notably, reports of such clashes largely declined to mention the role of French police in causing and fomenting violence, despite the abundance of video evidence documenting hundreds of instances of police brutality against unarmed and even prone protesters, as well as innocent bystanders. The Red Scarves themselves have also overlooked this aspect, both by “urging respect for French authorities” and by chanting pro-police slogans, as well as by asserting that French policemen have acted responsibly in response to the Yellow Vests despite the fact that the vast majority of injuries suffered since the protests first began last November were caused by the actions of militarized riot police. Over 2,000 have been injured and 10 have been killed since the protests began.

5/ A Journalist in #France got badly injured yesterday. The police officers shot a Flash ball and breaking his kneecap instantly! pic.twitter.com/f6od9GFNrf

Given their relatively sudden appearance and sympathetic media coverage within France and throughout the Western world, the Red Scarves have drawn skeptical scrutiny from Yellow Vest members, some of whom have described them as “pro-Macron stooges.” While it is difficult to know if the origins of the Red Scarves are as organic as has been portrayed in mainstream reports, there are certain aspects of the movement that have raised suspicion among journalists reporting from France and other observers.

For instance, evidence reported on by French media and journalists who have been closely covering the protests has shown that at least half of the Red Scarves who participated in Sunday’s demonstrations had been bused into Paris for the demonstration. This has led to speculation about the movement’s actual extent of popular support, both in Paris and nationwide, as well as speculation that some Red Scarves had been paid to travel to Paris to participate in the demonstration.

There is also the fact that the Red Scarves is a formal, state-recognized association, as opposed to the Yellow Vest movement, which is a grassroots entity. According to investigative journalist Vanessa Beeley, who lives in France, the fact that the Red Scarves is a formal association shows that it was planned long before the Yellow Vest movement was accused of fomenting violence. Beeley told MintPress News that, because of the length of the process needed to navigate French bureaucracy, in order for the Red Scarves to have been created on December 21st, the three directors of the group would have had to have initiated the process soon after the Yellow Vests protests began in mid-November. 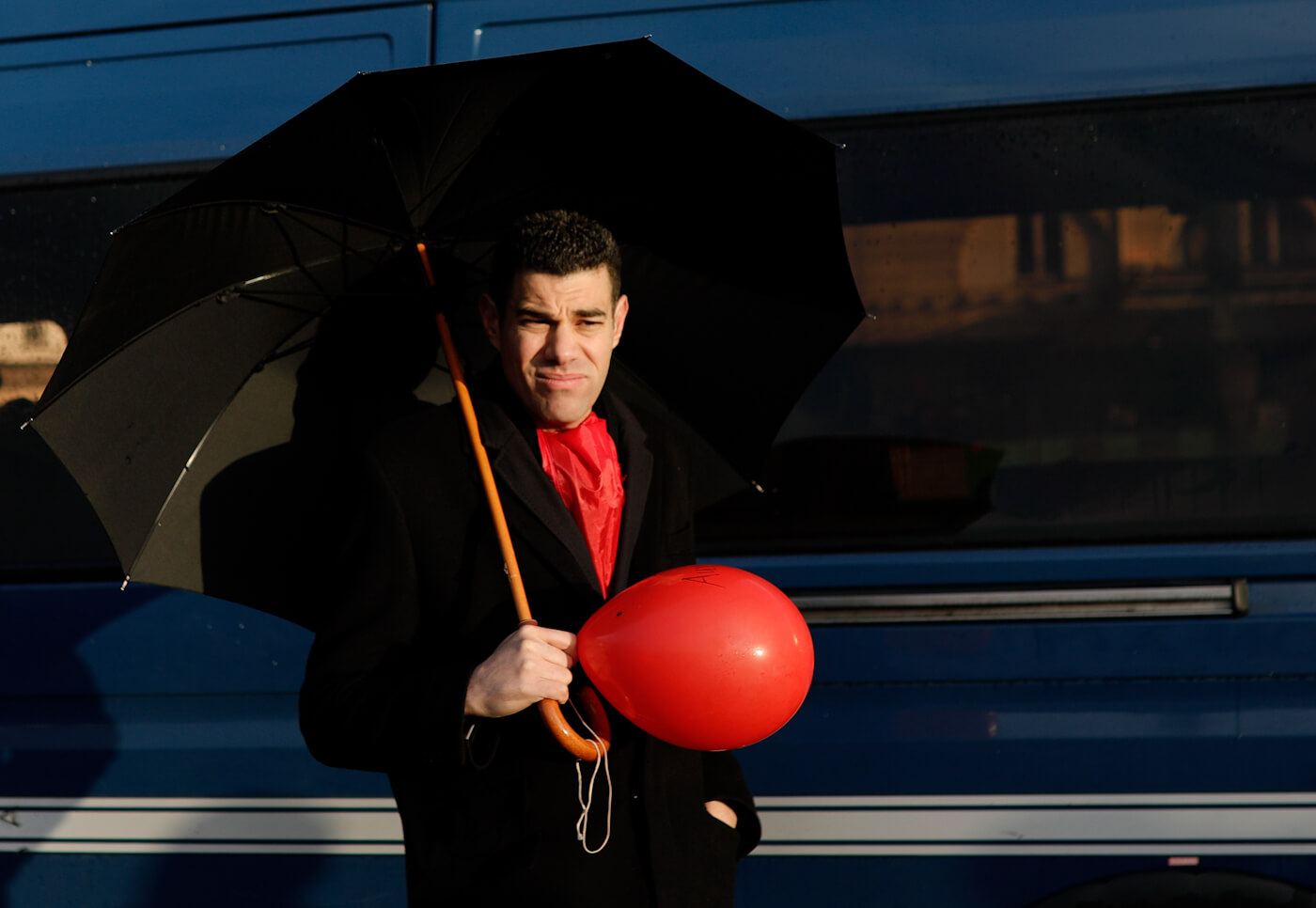 If this is the case, it greatly undercuts the prevailing narrative that the Red Scarves movement is a response to recent acts of violence associated with the Yellow Vests protests. Indeed, even the founder of the Red Scarves – Fabien Homenor, a computer scientist – told French media that he would have “donned a Yellow Vest” during the first weeks of the protest because he agreed with their initial concerns — i.e., the controversial fuel tax that Macron’s government has since scrapped following the success of the protests. This raises the question, why would Homenor create an association to counter the Yellow Vests at a time when he claims he supported their efforts?

Playing up, playing down, the numbers

An examination of mainstream reports on Sunday’s demonstration suggests an effort to inflate the Red Scarves’ importance and to build their image as “non-violent” and diminish the comparative significance of the Yellow Vests movement. For instance, the Washington Post stated that “Approximately 10,500 people marched in Paris [as part of the Red Scarves demonstration] on Sunday, according to police figures. That was more than twice the number that donned yellow vests in the capital the day before, when about 4,000 marched in Paris and 69,000 marched nationwide, according to the Interior Ministry.”

Thus, while the Post notes the available statistics, it claims that the Red Scarves demonstrations, which occurred only in Paris, were larger than Yellow Vests protests a day prior in the same city — but conflates Saturday’s Paris protest with the nationwide Yellow Vests protest in which a combined 73,000 people participated. A more accurate portrayal of the situation may have noted that, when both are examined from the national perspective, the Yellow Vests in their 11th week saw nearly seven times more participation than the Red Scarves in their first demonstration. The Post also failed to mention that the Red Scarves protesters were largely bused into Paris from other French cities.

The Post also called the demonstration “the long-awaited intervention in a story line that, until now, had featured just one side of a national conversation on social inequality,” even though the Red Scarves were not explicitly protesting against the Yellow Vests’ demands relating to inequality, but instead focusing on the alleged methods of some of their members.

Notably, the Post’s article barely mentions the horrific wounding of Jerome Rodrigues, a key figure in the Yellow Vest movement, whom witnesses have said was deliberately targeted by French police with a flashball grenade launcher at close range. As a consequence, Rodrigues suffered a horrific injury to his right eye and will now be disabled for the rest of his life, according to his lawyer. Other mainstream reports similarly focused on the Red Scarves movement and relegated mention of Rodriques’ injuries to the final paragraphs.

Exploiting, or manufacturing, the backlash

Whether or not the Red Scarves movement is an establishment-backed effort to divide the highly successful Yellow Vest protests remains to be seen. However, it ultimately matters little if the Red Scarves’ motives are genuine or not, as the French government and a sympathetic international press have already shown they are all too eager to push to divide the Yellow Vests movement, or at least weaken it, by playing the two groups off of each other.

While the French government and well-known media outlets had already been busy demonizing the group despite strong popular support across France, with a new group having emerged as its apparent antithesis, the pressure will now grow to disperse the Yellow Vest movement while also attempting to use the Red Scarves to manufacture support for draconian government policies and police crackdowns aimed at finally ending the establishment-threatening protests.