Above Photo: Fred Hampton Jr.’s efforts to save the boyhood home of his late father, slain Black Panther Fred Hampton Sr. received a boost of momentum on Sunday, when supporters learned a pending foreclosure auction had been stayed. | Shanel Romain

The childhood home of slain Black Panther leader Fred Hampton, 804 S. 17th Ave. in Maywood, will not be up for auction this week, as was originally scheduled, buying community leaders some more time in their attempts to keep the home in the Hampton family.

The ongoing ordeal, many community leaders said, should nonetheless serve as an opportunity for many people to learn about the factors that led to the home going into foreclosure in the first place.

According to the website of the Judicial Sales Corporation, the foreclosure sale — which was supposed to be at 10:30 a.m. on Oct. 23 — has been canceled for now.

A coalition of community members led by Fred Hampton’s son, Fred Hampton, Jr., had been frantically trying to raise money ahead of the scheduled foreclosure auction in order to save the home.

Hampton Jr. learned that the home was on the auction listing roughly a month ago. According to the Judicial Sales Corporation, the judgement owed to U.S. Bank was around $71,000, prompting Hampton Jr., the chairman of the Black Panther Party Cubs, to start a fundraising campaign.

According to Cook County Recorder of Deeds records, Hampton’s parents, Iberia and Francis, took out a $265,000 adjustable rate subprime loan on the house in 2007.

“One of the things that was striking about this was that the loan in 2007 is by far one of the worst loans that Recorder Yarbrough or myself has ever seen and we’ve seen thousands of mortgages,” said Mario Reed, the recorder’s director of public information.

“This was a several hundred thousand-dollar mortgage, with a 9.8 percent interest rate,” Reed said. “And because it was an adjustable rate mortgage, the interest rate could go all the way up to 15.8 percent. That’s predatory lending.”

Recorder of Deeds records show that US Bank, LaSalle Bank and Bank of America currently own the loan. US Bank owns most of the loan.

Reed said that US Bank, the primary lender, foreclosed on the property without contacting the owner. Currently, he explained, the home belongs to the estate of Iberia Hampton, Hampton’s mother. 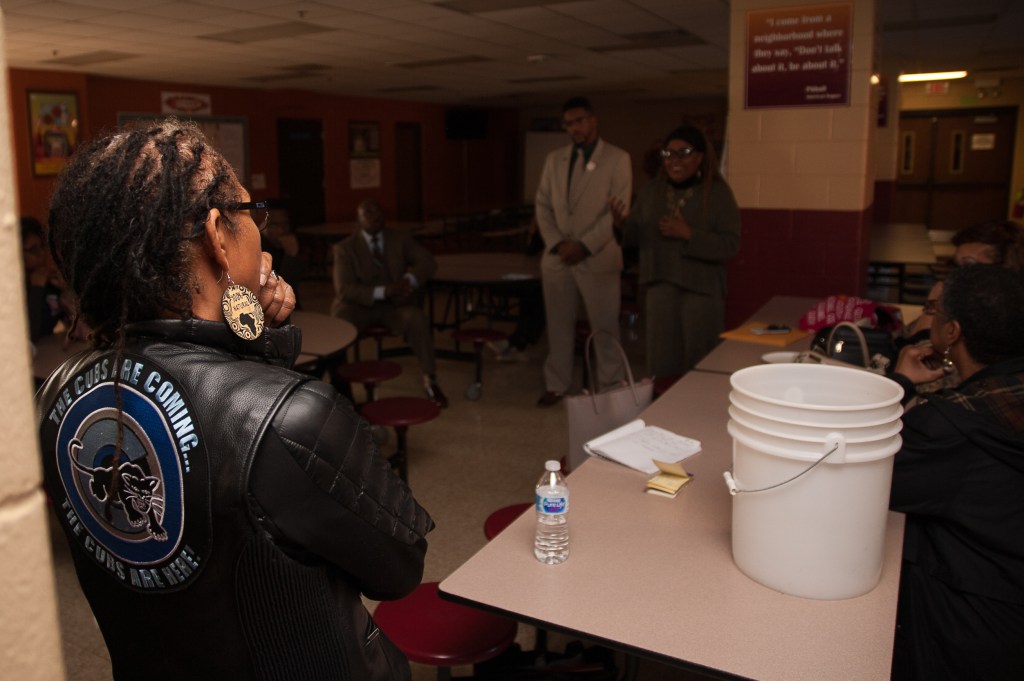 Shukura Sentwali, the minister of finance for the Black Panther Party Cubs looks on as Cook County Recorder of Deeds Karen Yarbrough, right, and Mario Reed, the recorder’s public information director, during an Oct. 21 meeting at Irving school in Maywood.  Bellwood Mayor Andre Harvey, sitting on the left, also looks on.| Shanel Romain

Attorney Khaliq Muhammad said that no member of the Hampton family has any legal standing to negotiate with the bank.

“We’re now in the process of getting Fred  Hampton Jr. and his cousins to become the rightful owners of the property,” Reed said. “The process has to go through probate court, which is typically a lengthy process, but there are some ways, such as a proof of heirship, by which you can make the process go faster.”

Muhammad said that another attorney, Ted London, will represent the Hamptons during a probate court hearing scheduled for Oct. 30 at 10:15 a.m. Muhammad explained that once legal ownership is established, he’ll represent Hampton Jr. and his cousins as they attempt to negotiate better loan conditions with US Bank.

“The goal still remains to reach a payoff amount, so that, ultimately, the home is paid in full,” Muhammad said, adding that until those negotiations start, the family will not know exactly how much is owed on the home.

“I’m still getting my feet wet learning about this,” Hampton Jr. said. “We don’t know how many resources we’re going to need to save this house.”

So far, Hampton Jr. and his supporters have raised more than $11,000 through two GoFundMe campaigns — one started by community activist Anthony Clark on behalf of the Democratic Socialists of America and another started by Carol Fife.

A 501(c)(3) nonprofit, Save the Hampton House, was also created to help raise funds. Shukura Sentwali, the finance minister of the Black Panther Cubs, said during Sunday’s meeting at Irving that people who want to give can make checks payable to Effect Real Change, Inc. c/o Save the Hampton House.

The checks should be mailed to 604 North Third Street, Monroe, LA 71201, if people don’t donate online. The Sunday afternoon meeting, which was held during a fundraising block party on the grounds of Irving school, was supposed to be followed by a meeting later that evening to tally the money raised before the expected Oct. 23 auction.

Since that auction has been stayed, the evening meeting was canceled. Supporters have, instead, scheduled a meeting for Nov. 1, 7 p.m., at Irving, in order to determine next steps, which could include trying to establish the home as a local landmark.

Some people have recommended that the funds be directed to one centralized source — preferably one within Illinois. Hampton Jr. emphasized that his father’s boyhood home symbolizes “an international phenomenon.”

“In order to make this an institution,” he said, “it will take not just the local neighborhood, but people from all over the world.”

Reed and Recorder Yarbrough said that people observing the saga of the Hampton home should take the situation as an object lesson.

“It is imperative that anytime someone owns property in the state, and especially in Cook County, that you have a plan in place as to who you want to take ownership of your house when you pass away,” Reed said.

“There’s a tool that’s been available since 2012 called a Transfer on Death Instrument,”  he said. “You can designate who you want to be your beneficiary upon your death.

“Fill out a single form at the recorder’s website, get it notarized by two witnesses, pay $50 to record it and you can ensure that the second you pass, the person you list as your beneficiary will automatically become the owner of the property and no bank can foreclose on your property without them first talking to your beneficiary.” 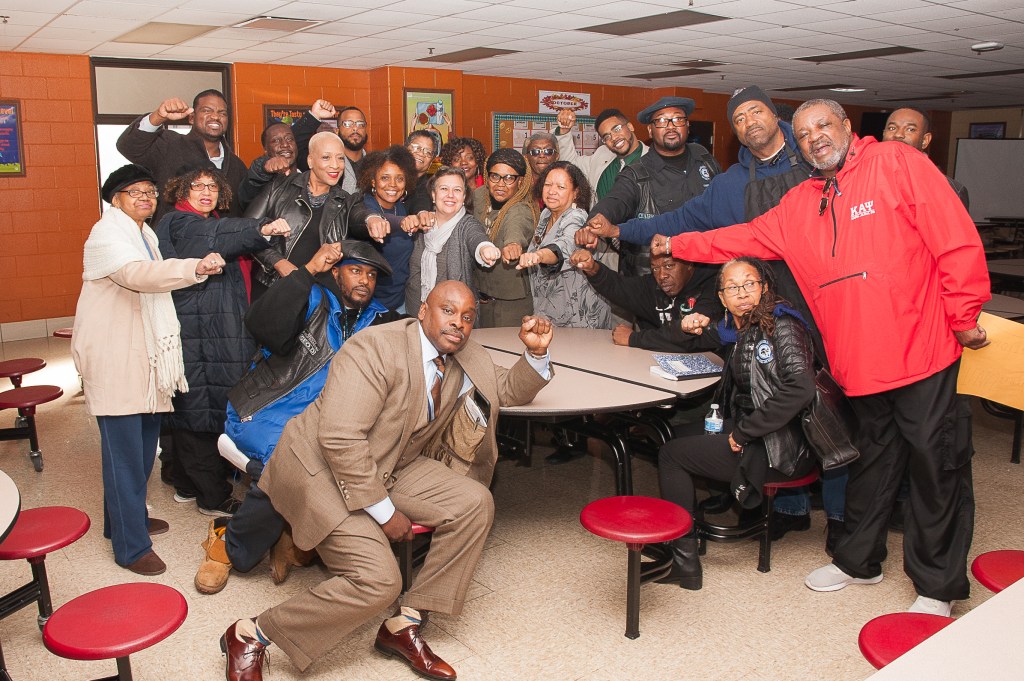 Community leaders who gathered on Sunday at Irving in order to strategize how to save the boyhood home of Fred Hampton. | Shanel Romain

“We have a fraud unit at the recorder’s office, avail yourself to it,” Yarbrough said. “Go to cookrecorder.com. You can always find [the unit] and it can answer any and all questions dealing with these kind of mortgages.”

Stan McKinney, a former Black Panther member who was once Huey Newton’s bodyguard, said that he was glad that the attorneys currently representing the Hampton family in the fight to save Hampton Sr.’s boyhood home are African American.

“When we were faced with trumped-up cases [in the past], most of the legal assistance we got was from white lawyers,” he said. “I’m very, very elated that black folk have stepped up to the plate. I’m elated to see black folk come together and be part of the process.”

Hampton Sr. was assassinated in 1969 by Chicago Police and federal law enforcement officials during a raid that was authorized by the Cook County State’s Attorney. At the time of his assassination, Hampton was in the process of attempting to form a multiracial, multiethnic coalition of community groups in order to fight against various social injustices.

“Hampton represented not just blacks and Latinos, but everyone,” Medina said. “From this situation, we must learn that we have to be together, because they want to divide us.” VFP