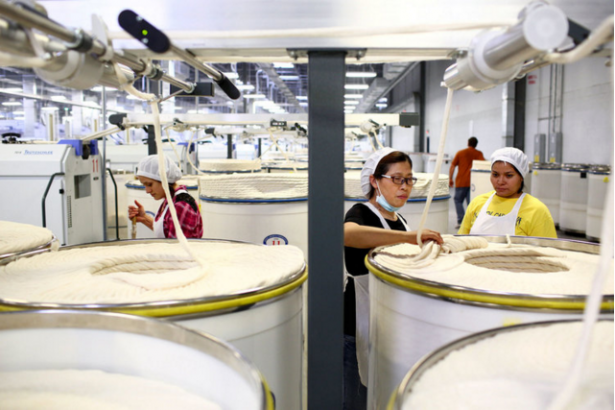 Share on FacebookShare on Twitter
Opposition to free trade is a unifying concept even in a deeply divided electorate, with almost two-thirds of Americans favoring more restrictions on imported goods instead of fewer.

The latest Bloomberg Politics national poll shows the issue unites the country like few others, across lines of politics, race, gender, education, and income.

A stunning rejection of what was a postwar cornerstone of American economic and foreign policies reverberates again and again in the answers to the poll’s questions.

Large majorities or pluralities favor policies protecting domestic jobs over lower prices, describe the North American Free Trade Agreement as being bad for the U.S., and even prefer a U.S. company building a nearby factory to employ 1,000 workers over a foreign — in this instance Chinese — owner that would hire twice as many.

“Virtually every question of policy has a Republican-Democrat split,” said pollster J. Ann Selzer, who oversaw the survey. “On trade, there is unity.”

Read the questions and methodology here

Republican Donald Trump and Democrat Bernie Sanders, from opposite ends of the political spectrum, have especially sought to leverage the protectionist sentiment to boost their presidential campaigns.

Trump has tapped into growing anger among voters who say free-trade policies, including some that have helped add to his own personal wealth, have hurt communities and meant the loss of manufacturing jobs to China, Mexico, and other nations.

Sanders has repeatedly targeted what he calls “disastrous” trade deals such as NAFTA that he argues benefit corporate America at a cost of lost jobs and a shrinking middle class.

In an appearance Tuesday at a U.S. Chamber of Commerce conference in Washington, former Boeing CEO Jim McNerney called Trump’s trade discussion “very dangerous” and added that the “the political debate is a little scary right now.”

In an era of increased U.S. worry about China’s growing economic and military strength, the poll found that more than two-thirds of Americans pick fewer jobs over Chinese ownership, when asked to select between a theoretical offer for their community of a U.S.-owned factory with 1,000 jobs or a Chinese-owned plant with 2,000 workers.

“The Japanese and Chinese companies are just here to make their money and get out,” said poll participant Robert Mangels, 73, a retired environmental compliance supervisor for a Japanese-owned company who lives in Hackettstown, New Jersey.

Mangels, a Republican, said he worries foreign-owned companies won’t adhere to U.S. regulations. “The heads of American companies may not like the regulations, but they realize they have to follow them,” he said.

“It may be a thousand jobs today, but maybe more in 10 years with the reinvestment,” said Thibodeau, a Republican and information technology worker temporarily on disability leave. “The opportunity for growth in the long term stands to be greater.”

The poll also shows the vast majority of Americans — 82 percent — say they would be willing to pay “a little bit more” for merchandise that’s made in the U.S. Among those with household incomes of less than $50,000, the number dropped slightly, to 75 percent.

“When it comes to made in America — as a consumer — I will spend a few extra bucks,” said Tara Hofbauer, 23, a management consultant who lives in Philadelphia.

Hofbauer, a Democrat, was in the minority in those supporting a Chinese factory over an American-owned one, if it meant more local jobs. “In terms of sheer utility, remove the emotion and 2,000 jobs is still 2,000 jobs,” she said.

A plurality of Americans — 44 percent — say NAFTA has been bad for the U.S. economy, while 29 percent say it has been a positive development. The accord, which took effect in 1994, was unfamiliar enough to 27 percent that they had no opinion.

The night before the March 15 Ohio primary, Trump appeared near Youngstown, where he blasted Ohio Governor John Kasich for supporting NAFTA when he was a member of Congress. Trump easily won the county where he’d spoken.

Annette Galloway, 55, the owner of a small business that does embroidery on T-shirts, hats, and other items near her home in San Antonio, Texas, is opposed to NAFTA. The trade agreement has meant jobs shipped across border to Mexico, she said.

“Those are jobs that have left the U.S.,” said Galloway, a Republican. “I don’t think there’s any way to stop the trend because there are all these cheap goods and people have gotten used to that.”

Even though trade policy has been a prevalent topic in this year’s presidential campaign, it ranks relatively low in the set of issues tested in the poll. Just 2 percent picked it as the “most important” issue facing the nation right now, well below unemployment and jobs at 19 percent and a decline in real income for Americans workers at 16 percent.

The national poll of 1,000 adults was conducted March 19-22 by Selzer & Co. of West Des Moines, Iowa. It has a margin of error of plus or minus 3.1 percentage points.