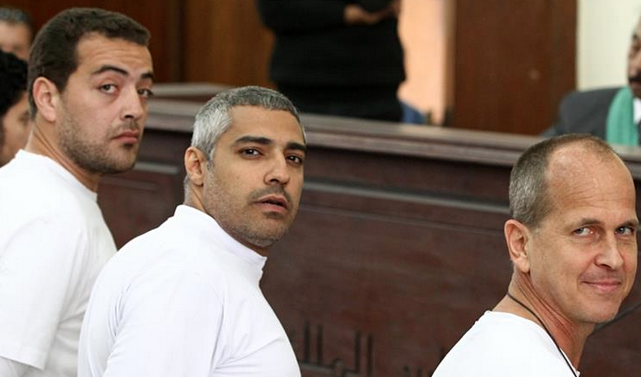 In such a repressive context, international media should not forget about the rest of the victims, writes Ashour [EPA]

“Shocked”, “sickened”, and “appalled” were appropriate words to describe the international reactions – and some of the local ones – to the second sentencing of Al Jazeera journalists and their colleagues in a Cairo court on Saturday.

“The verdict today … sends a message that journalists can be locked up for simply doing their job, for telling the truth, and reporting the news. And it sends a dangerous message that there are judges in Egypt who will allow their courts to become instruments of political repression and propaganda.”

Those were words of Mohamed Fahmy’s lawyer, Amal Clooney.

The more disturbing part is that her words are an understatement. The Committee to Protect Journalistsissued a report in June 2015 that concluded that Egypt’s imprisonment of journalists is at an all-time high.

Earlier in February, the Euro-Mediterranean Human Rights Monitor published a letter in which the names of 101 detained journalists were listed, followed by an updated report in August 2015 entitled “Practicing Journalism in Egypt is ‘Risky Business'”.

The plight of Al Jazeera’s journalists is deeply embedded in Egypt’s crisis.

The post-July 2013 regime is characterised by a hawkish military-style nature. It indeed tightened the room for any alternative narrative or independent reporting, even when compared to the heydays of Mubarak.

And if journalists did not toe the “official” line (ie the military and their appointees’ statements), they can be subjected to legal consequences.

This is not a new development under the newly ratified and enforced “anti-terrorism” law.

This has been a policy choice since July 2013 and is enforced systematically and with impunity by various tools and institutions, particularly during and in the aftermath of the Rabaa massacre in August 2013.

The judiciary was indeed one of the tools: in particular, the judges of the so-called “counterterrorism judicial circles” that tried Al Jazeera journalists among many others.

Those judges were thoroughly selected.

Many come from a state security or other police department backgrounds. Others are well known within the judicial circles to be among the “hawks” of the judiciary.

They have very strong political inclinations, and at the core of them, a very negative perception of the January 2011 uprising. And accordingly, these judges do not need political directives from the ruling executive.

They act on their own in terms of repressing whomever they perceive as “status quo” critics.

This is despite that in many of these cases the only legal evidence presented is a written report from a junior officer in the national security apparatus.

But this does not mean the end of the legal process for Al Jazeera journalists.

There is a second and a final appeal chance at Egypt’s highest appeal body, the Court of Cassation. But the latter is not immune from the aforementioned structural problems and, of course, from the executive’s inclinations and whims.

Politically, part of the crisis and its repercussions on journalists so far is that there are only negligible costs for unchecked repression.

If a political regime can kill more than one thousand protesters in less than ten hours – live, in front of international media – and get away with it, it can certainly prosecute the journalists who reported the violations without worries.

Hence, if the impunity continues, the cost-free repression is more likely to continue, at least in the short to mid-term.

This should be understood as a calculated policy choice, based on the current local and international environment, and not as an ad hoc arrangement for a specific situation.

I know. More disturbing, I am afraid.

But in such a repressive context, international media should not forget about the rest of the victims.

He had no one around him, just a Quran in his hand. The painful picture is a reminder of the many victims that the international media forgot.