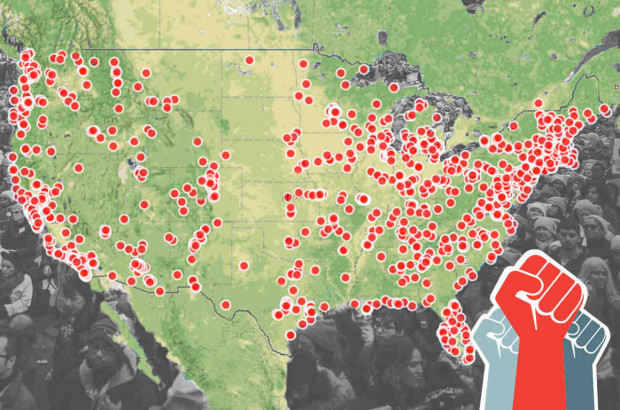 On Saturday night, people at more than 2,200 events around the nation tuned in for the inaugural event of People Power, a new platform harnessing nationwide grassroots resistance to the Trump administration’s assault on our Constitution and our values. At the event, we announced “Freedom Cities,” a campaign that provides a concrete plan for the People Power team to play offense in cities and towns across the country.

Even before “Freedom Cities,” our grassroots activism has borne fruit, as evidenced by the incredible protests around the country that brought defeat to President Trump’s first attempt to ban Muslims and refugees. We will resist with equal strength Muslim Ban 2.0, along with any other unconstitutional and un-American policies that flow from the White House.

While we resist, however, we must also play offense, and work to paint a picture of the type of country we want to be. More than 170,000 people have already signed up on the People Power platform – ready to lead the movement we need. And the Freedom Cities campaign provides a playbook for tackling some of Trump’s most harmful policies.

Freedom Cities encourages and supports grassroots activism aimed at driving policy change at the local level. It allows individuals and groups to come together to actively shape how we treat vulnerable communities, how we cherish and safeguard fundamental freedoms, and how we respond as a society to the needs of our families, friends, and neighbors.

The call to action:

Make the place you live and work a “Freedom City,” or a “Freedom Town,” or maybe a “Freedom County.” In doing so, you can help win the fight to protect our civil liberties and promote equality and justice in the age of Trump — one neighborhood at a time.

Freedom Cities is a sustained, multi-issue campaign that strives to generate tangible and lasting policy change — change that reaffirms our values and counters backward ideas that undermine the Constitution and American values. Freedom Cities will help advance issues we hold dear, like the protection of LGBT communities, equal pay and fair housing, and policing reform.

President Trump has already caused massive harm through his immigration policies. He has outlined, through executive orders issued his first week in office, a blueprint for a mass deportation machine, which will pull families apart and uproot hard-working, law-abiding individuals who have lived here for decades. The impact of this agenda is plastered in our newspapers daily, whether through the detention of a father of five U.S. citizen children who has only worked hard and obeyed the law since his arrival 15 years ago, or a domestic violence victim in Texas, who sought protection through our judicial system, but fell prey to Trump’s henchmen — apparently based on a tip provided by her abuser.

The Freedom Cities campaign will allow us to make American communities welcoming again.

Building on the work of countless groups around the country who have labored for years on these issues, and with the guidance of law enforcement leaders who are committed to smart policing and placing local communities first, we have developed model local policies that we hope to see adopted in every city and town nationwide. Instead of scrambling to react to each outrage that sees our neighbor hauled away to a privately run detention camp, we will systematically work to disable Trump’s deportation machine. Some of these model policies and rules are already on the books in certain places around the country, yet there are plenty of ways for most cities, towns, and counties to become more immigrant-friendly. And even once a community has adopted the full set of rules, activists will have additional opportunities to lend a hand on related issues or in neighboring communities.

During the March 11 event livestreamed from Miami, we provided a Freedom Cities Action Guide to the People Power team, which included a plan for activists to use in their local communities, along with useful strategic and tactical advice. This roadmap is meant to get people started, but the movement is yours. The United States has always been, and remains, what we make it.

So if you have not already joined the People Power team, the door is open. Sign up, receive the Action Guide, and take the first step in the plan. I have a hunch that a big group of people is waiting to tag team with you in your neighborhood.