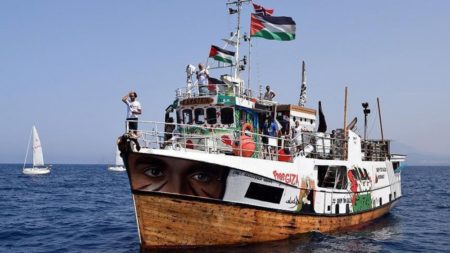 Above Photo: From Imemc.org

Note: US Boats to Gaza is holding events across North America this summer to raise awareness of the blockade. This past weekend, they held events in Chicago. Find out where they’ll be next by clicking here.

Chairman of the International Committee for Breaking the Siege of Gaza, and a founding member of Freedom Flotilla Coalition, Zaher Birawi, has unveiled a new attempt, by the Freedom Flotilla, to break Gaza’s naval blockade.

Birawi indicated, in press statements, that the new Freedom Flotilla might be carrying nominal relief items, considering that the core aim of the Flotilla is attempting to break Israel’s illegal blockade imposed on the Gaza Strip for more than 13 years in a row.

Solidarity caravans which provide political and media support to Gaza and call for breaking the Gaza blockade are no longer allowed by Egyptian authorities; however, the authorities have maintained a bare minimum of the charitable and relief convoys that managed to enter the Gaza Strip a few times, during the recent years and months, Birawi said.

Birawi pointed out that the Freedom Flotilla Coalition organized, during the current year, a number of anti-siege activities and projects which raise awareness and political pressure to break the blockade, and to expose its devastating impacts on the Palestinian people, particularly youth and children.

The Chairman stressed, according to Al Ray Palestinian Media Agency, that the Freedom Flotilla Coalition is composed of a large number of civil society organizations which work in the field of political affairs, and focus on the Palestinian right to freedom of movement and the breaking of the siege.